President Donald Trump has suggested the possibility of studying injecting disinfectants into COVID-19 patients or bringing UV light "inside" their bodies to kill the deadly virus, drawing immediate flak from health experts while a leading disinfectant producer urged people not to listen to such dangerous speculation 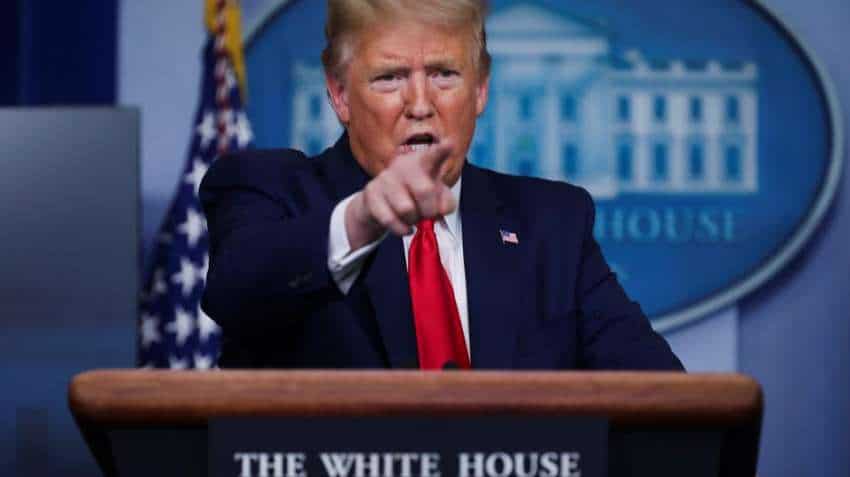 President Donald Trump has suggested the possibility of studying injecting disinfectants into COVID-19 patients or bringing UV light "inside" their bodies to kill the deadly virus, drawing immediate flak from health experts while a leading disinfectant producer urged people not to listen to such dangerous speculation.

Launching a new scientific study conducted by his department, Homeland Security for Science and Technology Under Secretary Bill Bryan on Thursday said the coronavirus dies at a much more rapid pace when exposed to sunlight and humidity.

"The virus dies the quickest in direct sunlight. Isopropyl alcohol will kill the virus in 30 seconds," he told White House reporters in the presence of President Trump at his daily briefing on the COVID-19 situation in the country.

Bryan's remarks left Trump wondering if there was a possibility of injecting the chemical into a person infected with COVID-19 as a deterrent to the virus.

"I see the disinfectant that knocks it out in a minute, one minute...And is there a way we can do something like that by injection inside, or almost a cleaning? Because you see it gets inside the lungs and it does a tremendous number on the lungs, so it would be interesting to check that," the US president told reporters at the press briefing.

"So, supposing we hit the body with a tremendous (force), whether it's ultraviolet or just very powerful light - and I think you said that hasn't been checked but you're going to test it. And then I said supposing you brought the light inside the body, which you can do either through the skin or in some other way. And I think you said you're going to test that, too. Sounds interesting," Trump said to Bryan.

"My concern is that people will die. People will think this is a good idea...This is not willy-nilly, off-the-cuff, maybe-this-will-work advice. This is dangerous," Craig Spencer, director of global health in emergency medicine at New York-Presbyterian/Columbia University Medical Center, told The Washington Post.

Reckitt Benckiser, which owns Lysol and Dettol, said that as a global leader in health and hygiene products, "we must be clear that under no circumstance should our disinfectant products be administered into the human body (through injection, ingestion or any other route)."

"As with all products, our disinfectant and hygiene products should only be used as intended and in line with usage guidelines. Please read the label and safety information," the company said in a statement on Friday.
Lysol, which is one of the America's best known cleaning brands, has been named in tweets at least 125,000 times since the White House news conference.

US Food and Drug Administration commissioner Dr Stephen Hahn, who is also a member of the White House coronavirus task force, warned against ingesting any disinfectants to kill the coronavirus.

"I certainly wouldn't recommend the internal ingestion of a disinfectant," Hahn was quoted as saying by the CNN.
Dara Kass, associate professor of emergency medicine at Columbia University Medical Centre, also asked people to refrain from doing such things.

"Please don't drink bleach or isopropyl alcohol to remove #COVID19 from your saliva," she tweeted.
"It's horrific," Kass told the Post.

People who consume such chemicals often die. Those who survive usually end up with feeding tubes, a result of their mouth and esophagus being eroded by the cleaning agents, she said.

Even as experts from the medical community came forward to challenge Trump's latest remarks, Deborah Birx, one of the top American public health experts, did not respond to the comments about the light therapy or disinfectant injections.

Her lips pressed in a tight line, Brix, who serves as the response coordinator for the White House's coronavirus task force, was silently listening to Trump's comments from the sidelines, the Post reported.
The US has reported over 869,170 COVID-19 cases and nearly 50,000 deaths.