Global stocks tumble, yen rallies as Trump asks US firms to look at alternatives to China

China`s Commerce Ministry said in a statement early on Friday it would impose tariffs on about $75 billion in imports from the United States including some agricultural products, crude oil and small aircraft. 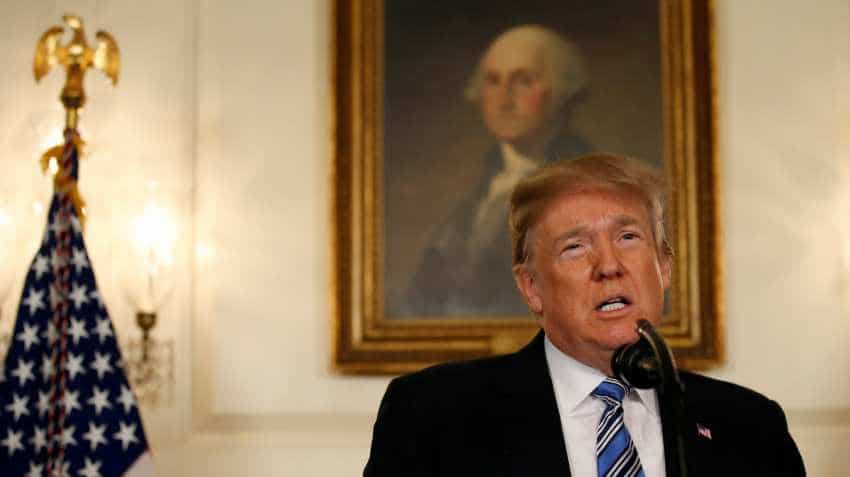 After markets closed in New York, Trump tweeted the United States would raise tariffs on $250 billion worth of Chinese imports to 30% from 25% beginning Oct. 1. Image source: Reuters
Written By: Reuters
RELATED NEWS

Stocks, the dollar and oil prices fell on Friday while safe havens rose after President Donald Trump demanded US companies look at alternatives to China for manufacturing, following Beijing`s retaliatory tariffs on American goods. China`s Commerce Ministry said in a statement early on Friday it would impose tariffs on about $75 billion in imports from the United States including some agricultural products, crude oil and small aircraft.

Trump responded mid-morning in a series of tweets, writing that "American companies are hereby ordered to immediately start looking for an alternative to China." Trump cannot force US companies to abandon China and he gave no detail on how he might proceed with any such order. But his series of tweets was seen as a harbinger for yet another escalation of the trade war.

After markets closed in New York, Trump tweeted the United States would raise tariffs on $250 billion worth of Chinese imports to 30% from 25% beginning Oct. 1. "Additionally, the remaining 300 BILLION DOLLARS of goods and products from China, that was being taxed from September 1st at 10%, will now be taxed at 15%," he wrote.

The morning`s tweets "certainly heightened concerns about trade and its drag on global growth," said Craig Bishop, lead strategist of the fixed income group at RBC Wealth Management at Minneapolis. "It has heightened chances of a recession. The President is his own worst enemy when he tries to manage both fiscal and monetary policies."

Stocks that benefit during economic expansions fell the most on Wall Street, also hinting at recession concerns. "There is a lot of worry here. I would say what (Trump) is tweeting is disconcerting. It`s a fair reaction from the markets. I don`t think anyone thought we`d get to this level," Michael O`Rourke, chief market strategist at JonesTrading, said during market hours.

Emerging market stocks lost 0.20%, an index of Latin American shares dropped more than 3% to close at its 2019 low and US dollar-denominated Nikkei futures fell 2.0%.

Trump`s tweets made matters worse. "We still view the U.S.-Chinese trade standoff as a major bearish consideration that will likely be requiring additional downward oil demand adjustments as this year proceeds," said Jim Ritterbusch, president of Ritterbusch and Associates.

US crude fell 2.67% to $53.87 per barrel and Brent was last at $59.11, down 1.35% on the day. Trump’s comments came after Federal Reserve Chair Jerome Powell said the U.S. central bank will "act as appropriate" to keep the economic expansion on track, but noted rising risks.

Powell`s remarks had given markets some relief after the overnight announcement from Beijing. Trump`s tweeted response to the speech asked who is "our bigger enemy" between Powell and China`s President Xi Jinping.

The two-year/10-year yield curve inverted last week for the first time since 2007, a signal that a US recession is likely in one to two years. The curve has traded in and out of inversion over the past three days. US Treasury yields fell, with 10-year notes last up 22/32 in price to yield 1.5351%, from 1.61% late on Thursday.