5 books billionaire Bill Gates wants you to read this summer

Microsoft Corporation founder Bill Gates often shares his views through his website, and on his love for books. 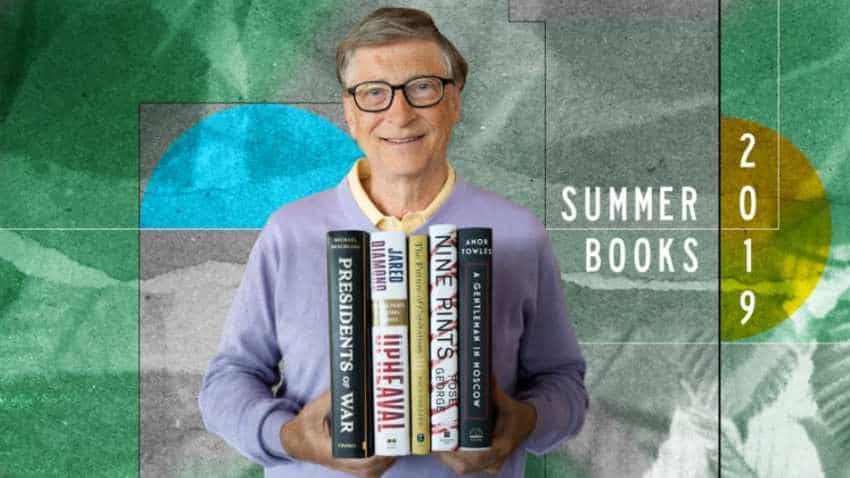 Bill Gates net worth crossed 100 billion US dollars once again following the sharp surge in the share prices of Microsoft Corporation in March 2019. Image source: gatesnotes.com

Billionaire Bill Gates has recently suggested five books for summer 2019. The Microsoft Corporation founder often shares his views through his website -www.gatesnotes.com, and on his love for books he says, "I always like to pick out a bunch of books to bring with me whenever I get ready to go on vacation. More often than not, I end up taking more books than I could possibly read on one trip. My philosophy is that I’d rather have too much to read on a trip than too little."

Further, he suggests on his website, "If you’re like me, you’re probably starting to think about what’s on your summer reading list this year—and I can’t recommend the books below highly enough," adding "If you’re looking for something that’s more of a typical summer book, I recommend Graeme Simsion’s The Rosie Result. (And if you haven’t read the first two books in the Rosie trilogy, summer vacation is the perfect time to start!) I also can’t resist a plug for Melinda’s new book The Moment of Lift. I know I’m biased, but it’s one of the best books I’ve read so far this year."

Bill Gates, who is the world's second richest man, shares his full summer reading list given below:

1. Upheaval, by Jared Diamond, saying "I’m a big fan of everything Jared has written, and his latest is no exception."

2. Nine Pints, by Rose George. He said, "If you get grossed out by blood, this one probably isn’t for you. But if you’re like me and find it fascinating, you’ll enjoy this book by a British journalist with an especially personal connection to the subject."

3. A Gentleman in Moscow, by Amor Towles, saying "It seems like everyone I know has read this book. I finally joined the club after my brother-in-law sent me a copy, and I’m glad I did."

4. Presidents of War, by Michael Beschloss. Gates recommends this by saying "My interest in all aspects of the Vietnam War is the main reason I decided to pick up this book."

5. The Future of Capitalism, by Paul Collier, saying "Collier’s latest book is a thought-provoking look at a topic that’s top of mind for a lot of people right now."

Notably, Bill Gates net worth crossed 100 billion US dollars once again following the sharp surge in the share prices of Microsoft Corporation in March 2019. According to Bloomberg Billionaires Index, Bill Gates has a net worth of $102 billion as of May 25, 2019.

Coronavirus: Bill Gates’ comments on Omicron variant are going viral - What he said