It is expected that the government may increase the income tax exemption limit to Rs 3 lakh from currently Rs 2.5 lakh. 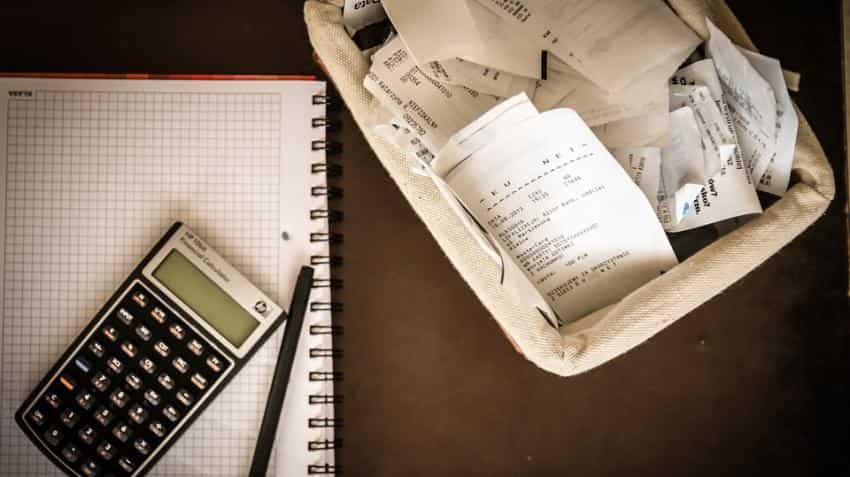 Since the Budget 2017 provided some relief to common man in the form of lowering personal income tax rate, they once again look at the Finance Minister for the same in the upcoming Budget.

In the last Budget, Finance Minister Arun Jaitley reduced the personal income tax rate to 5% from previous 10% for individuals falling under income group of Rs 2.5 lakh to Rs 5 lakh.

As the Union Budget 2018-19 will be the fifth and final full budget of the present government, SBI report expects relief for common man, while looking at the government's principle of inclusive growth and its medium and long term objectives.

Here are a few suggestions of the SBI for common man's tax relief:

It is expected that the government may increase the income tax exemption limit to Rs 3 lakh from currently Rs 2.5 lakh.

According to the table, the gap between deciding the exemption limit has been small till 2014 - 15, but after that there has not made any change in this category. 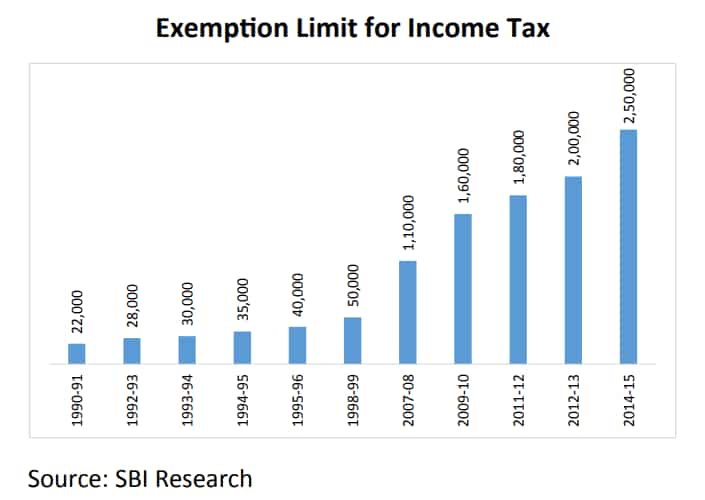 Dr Soumya Kanti Ghosh, Group Chief Economic Adviser at SBI, said, "Due to 7th pay commission, the personal disposable income has been increased, so we believe there is a need to raise the exemption limit to Rs 3.0 lakh. Due to such increase in limit, around 75 lakh taxpayers will be exempted from income tax.”

Under IT Act, Section 80C allows certain investments and expenditure to be tax-exempt. A person must  plan investments well and spread it out across the various instruments specified under this section to avail maximum tax benefit.

Unlike Section 88, there is no sub-limit and is irrespective of how much you earn and under which tax bracket you fall.

Currently, the government has allowed Rs 50,000 deductions under Section 80CCD (1) for NPS, which resulted in total deductions to Rs 2 lakh.

For this, Ghosh said, “We believe government should continue to allow RS 50,000 deduction for NPA. There is a need to increase the 80C deduction limit by least Rs 50,000 to Rs 2 lakh. This will cost government around Rs 8,000 crore.”

There are many tax benefit on home loan provided by the Income Tax department, and these can be claimed as tax deductions under different sections while filing the Income Tax Return.

SBI says, “We also expect the government to increase the exemption limit of interest payments under housing loan! The overall impact of such concessions will result in revenue foregone of around Rs 28,500 crore.”

According to Section 24 of IT Act, the Income from House Property shall be reduced by the amount of Interest paid on Home Loan where the loan has been taken for the purpose of Purchase/Construction/ Repair/ Renewal/ Reconstruction of a Residential House Property.

Maximum tax deduction allowed in this section is Rs 2 lakh which was changed in Budget 2014 from previous Rs 1.5 lakh for self- occupied property.

In an effort to incentivize savings, the government can exempt interest of savings bank deposits.

SBI suggests that the exemption limit on TDS on Interest on term deposits with Banks may be raised from the present limit of Rs 10,000 per annum.

On the other hand, the lock in period for Tax savings Term Deposits needs to be reduced to 3 years from the present 5 years and these deposits should be brought under EEE tax regime. This will cost the government only Rs 3500 crores.

As per SBI, if the government introduces the above mentioned changes, it will see revenue foregone of around Rs 28,500 crore.

Corporate sector too have some expectations from the government in this budget.

Vinay Sethi, Head, Market Development, Thomson Reuters, South Asia, said, “India’s taxation environment was largely viewed as unfriendly and complex due to a high corporate tax rate coupled with exemptions, which pushed the effective tax rate far from the statutory tax rate and accounted for a large number of disputes.”

It may be noted that the Finance Ministry, while presenting the Union Budget 2015-16, had introduced a phased reduction of corporate tax rates from 30% to 25%. Also, the benefit of a reduced corporate tax rate of 25% was extended to corporations within a stipulated turnover threshold.

Explaining, Sethi mentions that during this upcoming budget, the government should continue the strategy of making India’s taxation system strong and transparent by slashing the basic corporate tax rate to 25% for all categories of corporates.

Following this action, Sethi says, “such reduction accompanied with fewer tax exemptions will undoubtedly make both, the tax law and tax administration simpler. At the same time, it will bring use of technology, analytics and data mining to the forefront.”

At present, the government’s focus has been to broaden tax base, increase tax certainty, reduce compliance costs and use data analytics.

“The corporations will need to respond by investing in the right tax technology solutions to meet and make the most of government initiatives and also use tax automation and data analytics to add much higher value to their businesses,” Sethi said.

Summing up the Budget expectations, Ghosh added, “We however believe the budget will ultimately be a balance between pragmatism and fiscal consolidation.”