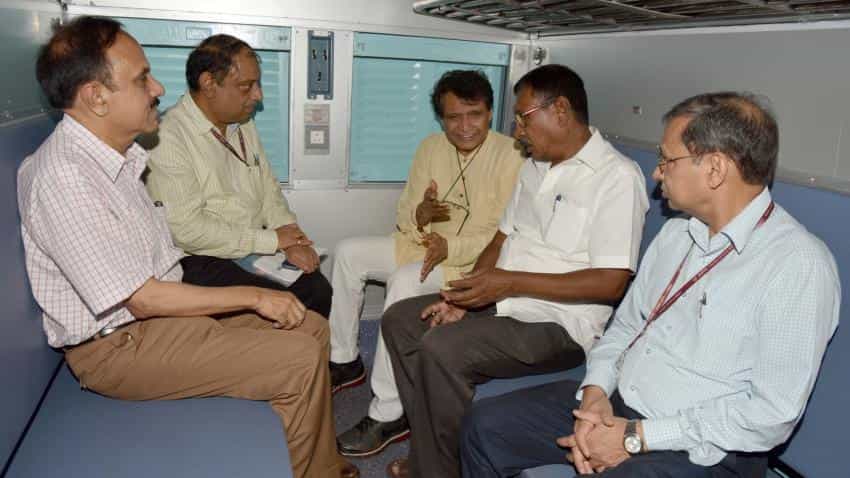 Railway Budget merged with General Budget will have about two-page mention of railways' upcoming activities, including major projects, expenditure and revenue targets for the next fiscal. Image Source: IANS
Written By: PTI
RELATED NEWS

Fencing of the Delhi-Howrah and Delhi-Mumbai railway routes, formation of the Railway Holding Company, and adequate fund allocation for strengthening tracks and bridges will be the highlights of the proposals in the upcoming Budget 2017-18, officials have said.

Railway Budget merged with General Budget will have about two-page mention of railways' upcoming activities, including major projects, expenditure and revenue targets for the next fiscal.

The national transporter is forming up a holding company with networth of Rs 34,000 crore comprising 14 railways PSUs including IRCTC, RITES, Concor, RailTel and MRVC, to leverage loan from the market with zero debt and also be a beneficiary in case of selling of the shares of its subsidiaries.

Railways has embarked on an ambitious project to speed up train movement in busy corridors and accordingly undertaken an ardous task of fencing off the Delhi-Howrah and Delhi-Mumbai routes at a cost of about Rs 45 lakh per km to run trains at 160 km per hour.

Fencing off the entire route is crucial for running trains at 160 km per hour which can be later raised to 200 km per hour, a senior Railway Ministry official said.

Describing it as a paradigm shift for rail network development, he said fencing is essential for preventing trespassing and cattle movement to ensure high speed and safety and it will find prominent mention in the budget papers.

Besides fencing, track and signalling upgradation and elimination of unmanned level-crossings along the way for major trunk routes of Delhi-Mumbai and Delhi-Howrah sections will be taken up at an estimated cost of Rs 21,000 crore.

According to the feasibility study, it is a remunerative project with both routes having high rate of return.

While the rate of return for Delhi-Howrah route is 18 per cent, it is 14.7 per cent for Delhi-Mumbai, he said.

The Delhi-Mumbai section will cover Baroda-Ahmedabad route and Delhi-Howrah sector will also include Kanpur-Lucknow corridor in the project.

The two major trunk routes have been taken up in the first phase and later on Howrah-Chennai and Mumbai-Chennai sectors will also be taken up, he said.

Since the Railways has of late seen some derailments, Finance Minister Arun Jaitley will announce of a special safety fund of about Rs 20,000 crore for the fiscal 2017-18.

Railways has sought Rs 1.19 lakh crore over the next five years from the government for safety upgradation of the rail network and the Finance Ministry is likely to grant Rs 20,000 crore in the first year.