According to media reports two phones namely  Apple iPhone 8 and Xiaomi Mi Mix 2 are expected to be launch in the second week of September 2017. 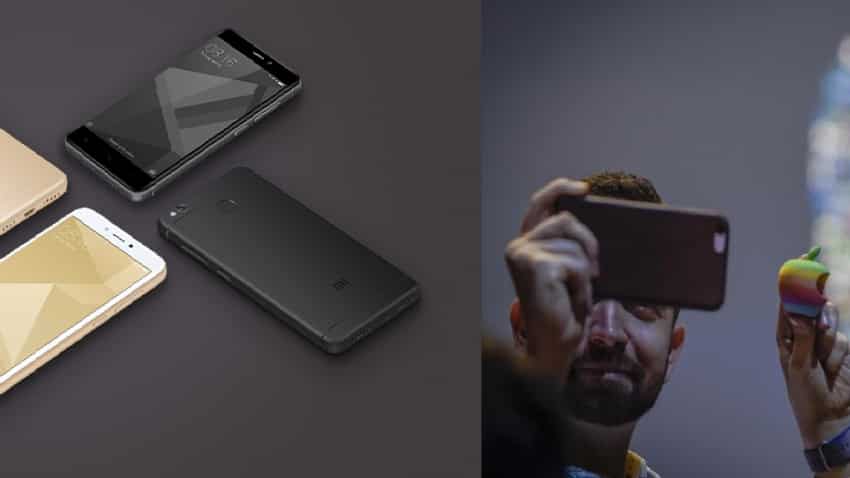 The image of Xiaomi Mi Phones and a man holding an Apple iPhone and an Apple logo. Photo: IANS/ Official Website

Two smartphones namely Apple iPhone 8 and Xiaomi Mi Mix 2 are speculated to be launched on the same day of the next month.

According to a Chinese website TechWeb claims Xiaomi Mi Mix 2 will be officially launched on September 12,2017 in China. While many media reports have stated that Apple Inc plans to launch the next iPhones on September 12, 2017.

Here are the features of both Apple iPhone 8 and Xiaomi Mi Mix 2.

This second generation Mi Mix will be designed by the same designer Philippe Starck who worked on the original Mi Mix. According to Android Authority website, Mi Mix 2 is expected to come with the Snapdragon 835 chipset, 8 GB of RAM, and a 5 MP selfie snapper.

Reportedly, it is believed to be available on two variants. The model may come up with  8 GB of RAM will offer 256 GB of storage, while the second option will feature 6 GB of RAM and 128 GB of storage.

The Apple iPhone 8 will sport the latest A11 octa-core processor. It is expected to have a 4GB RAM, while some leaks suggest it may sport a 3GB RAM. The Samsung Galaxy S8 has a 4GB RAM.

This next generation iPhone 8 is also rumoured to sport a bold new design and would feature an OLED display full of holes.

Further the new diagram of iPhone 8 suggests that Apple may move the fingerprint reader to the back of the phone and the camera modules also appear to have changed.

The full spectral sensing ambient light sensor will be added across the iPhone 7S, iPhone 7S Plus and iPhone 8.

Meanwhile, we wait for the launch of these two smartphone, recently Xiaomi has released the Beta version of the MIUI 9 Global ROMs for the second batch of devices.

How to Upgrade to MIUI 9? Click here for further information.

After conducting a poll, Xiaomi high;lighted that  the 'recommendation rate' for MIUI 9 update stands at a staggering 94.62%.