WhatsApp Dark Mode for Android, iOS rolled out: Here is how to get it on your smartphone

Surely, much to the delight of WhatsApp users, the company has finally rolled out the Dark Mode for both Android as well as iOS users after almost one year of teasing and leaks. 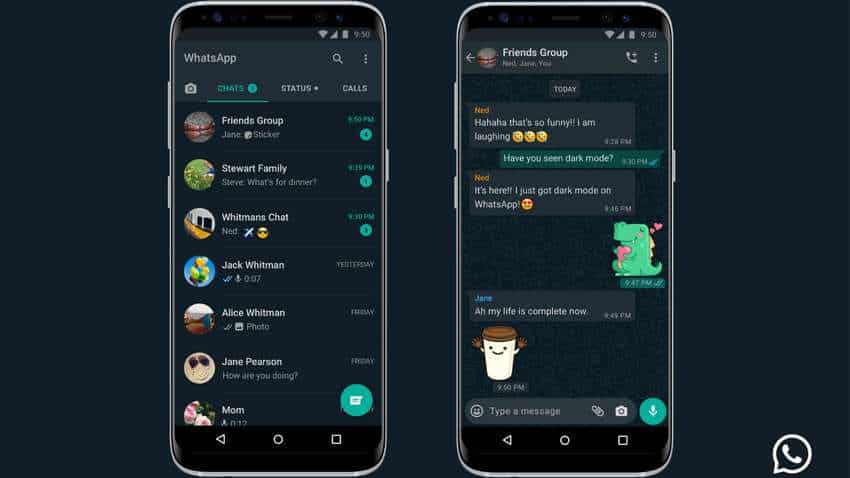 The Facebook-owned platform was working on the feature for quite some time now. Source - WhatsApp Blog.
Written By: ZeeBiz WebTeam
Edited By: Harish Dugh
RELATED NEWS

Surely, much to the delight of WhatsApp users, the company has finally rolled out the Dark Mode for both Android as well as iOS users after almost one year of teasing and leaks. The new WhatsApp feature is now available for all users starting Wednesday. The Facebook-owned platform was working on the feature for quite some time now and had rolled it out as beta versions of both software operating systems. The instant messaging app also released a video titled “Hello Darkness" which includes a previously unreleased version of “The Sound of Silence" by Art Garfunkel and Paul Simon.

"This feature is designed in such a way that if you use the phone in low light, then your eyes will not be stressed. Hopefully, this will also relieve you from those situations when the phone lights up in the entire room as soon as you turn on the phone," said the company in a blog post.

How to enable WhatsApp dark mode on Android and iOS phones?

- First of all, you need to update your smartphone with the latest version of WhatsApp from Google Play Store or App Store.

- Open WhatsApp and go to settings.

- In Chats, tap on Display.

- You will see the option to change Themes.

- Choose Dark Theme to enable it.

As revealed earlier, WhatsApp has two more options for its users. These include - Light theme which is the usual white theme that you have always used and Set by Battery Saver which automatically switches between light and dark theme according to your Battery Saver settings.

Can't see the option in WhatsApp?

Now, chances are that a lot of users might not see the Theme option in their WhatsApp as of now. This is because the feature is rolling out gradually to all the 2 billion users. So, there is no need to worry and the feature should appear for you in the coming days.

What is the benefit of WhatsApp Dark Mode?

The feature ensures that less strain is put on your eyes and at the same time, reduces the battery consumption of your phone. Of course, it looks cool too!