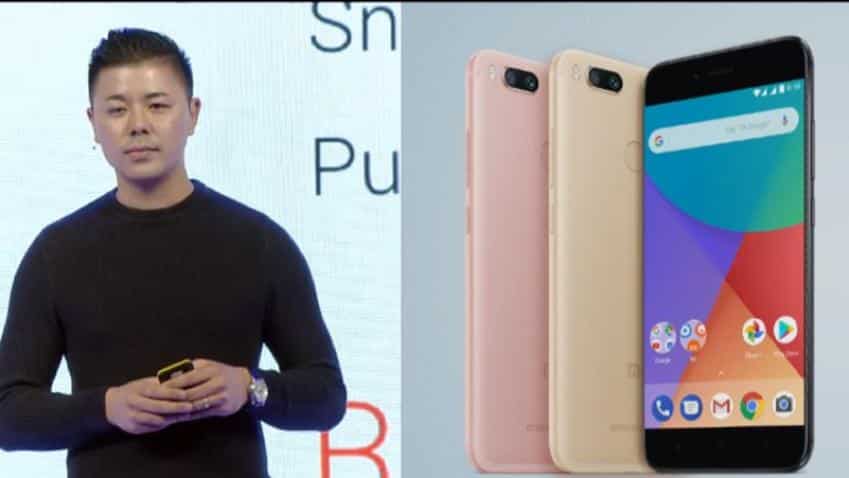 The company is first launching Xiaomi's Mi A1 globally first in India which will be available on Mi's official website and Flipkart on September 12 from 12 noon. It will also be available in its offline retail stores from September 12.

The phone has been priced at Rs 14999 for its 4GB RAM and 64GB internal storage variant.

Airtel new and existing customers will be given up to 200GB additional 4G data for free on purchase of the Mi A1.

Sung said the Mi A1 will be available in three colour options - black, gold and rose gold. The phone has a 5.5 full HD display and is protected by Corning Gorilla glass.

It has 12 mega pixel plus 12 mega pixel cameras which was similar to that used in the iPhone 7. Mi A1 camera abilities were then compared to OnePlus 5 and iPhone 7 Plus camera.

The phone is powered by Snapdragon 625 octa-core processor. It includes 10 volt smart power amplifier which amplifies sound on speaker mode.

All Mi A1 will come with pyrolytic graphite sheet so that phone temperature does not go too high.

He said Xiaomi witnessed four times growth in one year to 328% growth in the first half of 2017. It was the number 1 online smartphone brand in India. He further added Xiaomi has 46.9% market share in India.

Speaking about the other two top selling smartphones in India, Jain said it was the Redmi Note 4 and the Redmi 4.

“The device will have the most sought after dual cameras. With Xiaomi launching a new series with dual cameras on Flipkart, it is expected to gain popularity among the Mi and Flipkart customers,” Flipkart said.