SPY IN YOUR POCKET? Pegasus – How much is your phone compromised from SPYWARE ATTACKS

Ghost of Israeli spyware Pegasus are out once again. It was in news in 2019. According to the experts, Pegasus can get installed in your phones even without you knowing about it. It can do it just through a message or a missed call. You are not even required to read or receive it 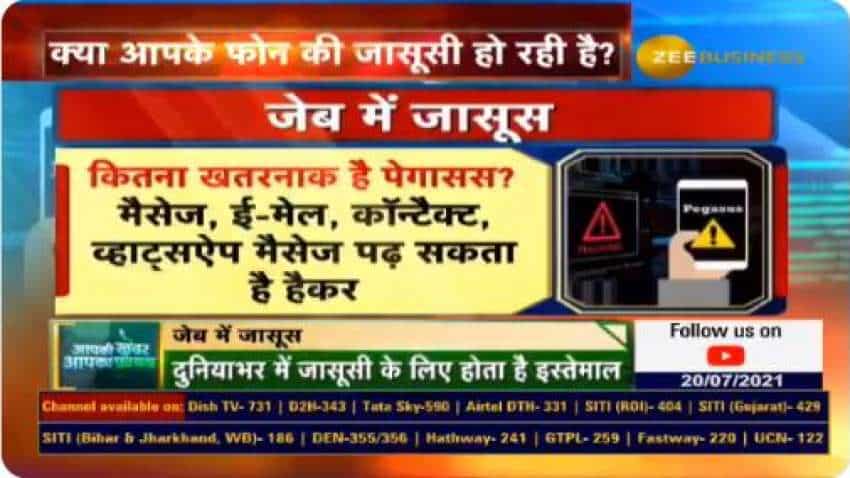 WhatsApp Users Warning! Your chats may be read by others; this 'Indian' malware can hack even your passwords

The ghost of Israeli spyware Pegasus are out once again. It was in news in 2019. While the opposition is seeking answers, the Government has been giving its response with regards to the questions. But, this incident has made people skeptical about their phones. This is because whatever information is available on Pegasus, it is discomforting.

Once this spyware enters in your phone, it gets installed automatically and gives access of your phone to the hacker.

This spyware can give access of your phone to the hacker. The hacker can read your messages, WhatsApp and your confidential emails. It can also read your encrypted messages.

The hacker also gets access to your videos and photo gallery. The hacker can have a track of your location through the GPS. This spyware is so dangerous that it can trigger your phone and not only view your activities but also record them.

Experts have said that this spyware has mostly lodged its attacks on iPhones. It can also easily hack your Android phones.

Pegasus is a spyware software developed by an Israeli company NSO Cyber Technology which is now being used to spy on targets world over. The full name of NSO is Niv, Shalev and Omri.

Pegasus is considered as one of the most dangerous spywares in the world which is capable of spying Android phones and iPhones.

NSO says that it sells this spyware only to the governments and not to individuals. The company has not revealed its actual price. But, it is being said that the cost of a 1 year license is USD 7-8 million. It allows monitoring of 500 phones in a year. At one go, it can keep a tab on 50 phones.

In India, the name of Pegasus surfaced in 2019 for the first time. It was when thousand of people were made targets of this spyware through WhatsApp. Many Indians were targeted too.

This raised doubts over the privacy and security mechanism of WhatsApp. Many users even considered leaving the messaging platform.

While Pegasus is a very sophisticated spyware and is not available to private parties, it does not require such sophisticated software to hack your phones. It can be done with simpler ones too.

WhatsApp Users Warning! Your chats may be read by others; this 'Indian' malware can hack even your passwords