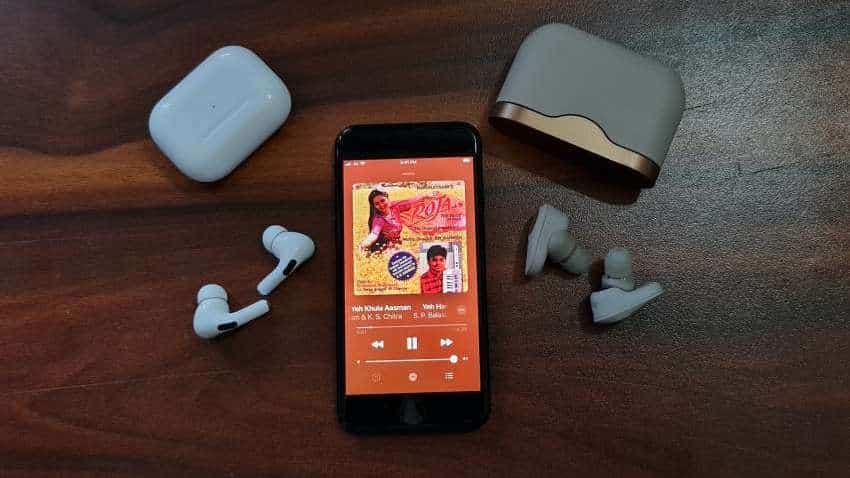 It’s clear that both the TWS have their own set of advantages.

Sony WF-1000XM3 Vs AirPods Pro: You may include ten batsmen in your 25-man IPL squad, but only two eventually open the batting. The Indian market is witnessing a flood of TWS earphones, with offerings across points, but only a few qualify to be the best. The Apple AirPods Pro and Sony WF-1000XM3 standout with their noise cancelling abilities – a feature found rarely on earbuds. While AirPods Pro have been selling in the country for a while now, almost dominating the premium TWS category, Sony introduced its offering only a few months back.

Unlike smartphones, where a few inches can make a lot of difference, even the biggest of earbuds are easy to carry. Even then if you are particular about the form factor, the Apple AirPods Pro are definitely more compact and less bulky. The charging case and buds are both lighter than those of WF-1000XM3. 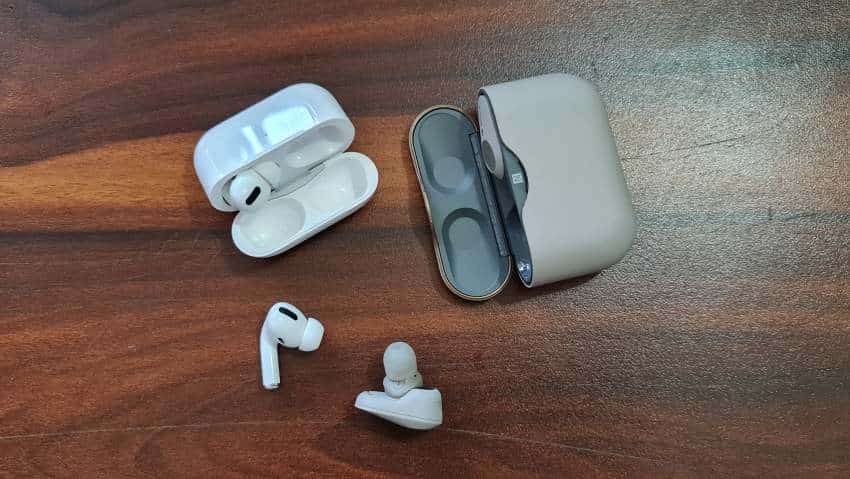 In our review of the Sony WF-1000XM3, we said that these are the most comfortable pair of earbuds we have ever used. And, that pretty much settles the debate here. They fit in really well and do not come off your ears. While the AirPods Pro also have a decent fit, they do tend to fall when you are in motion. 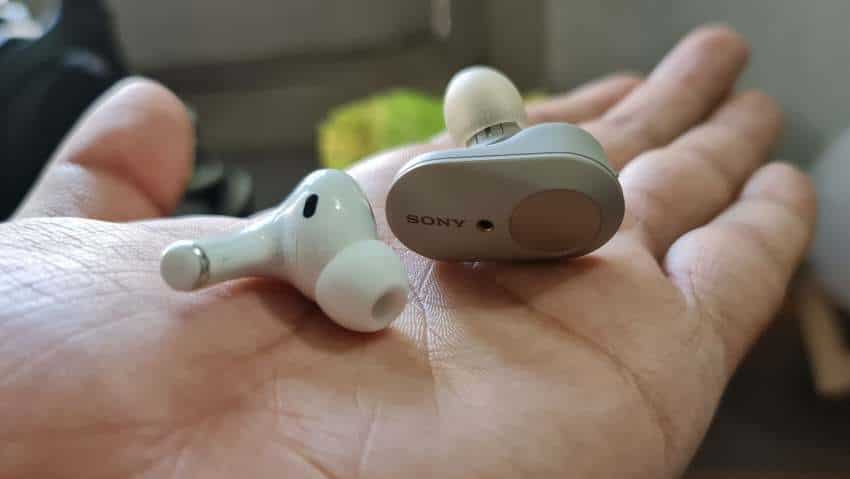 The advantage with AirPods is that because of the lightweight they are more suited for long-hour usage.

This is where it’s hard to pick a winner. I was expecting Sony WF-1000XM3 to be a clear winner with company’s experience and legacy in this segment. But, the two TWS go neck and neck, with hardly anything to pick from. The Sony TWS use 6mm drivers while the Apple earbuds flaunt their custom drivers. 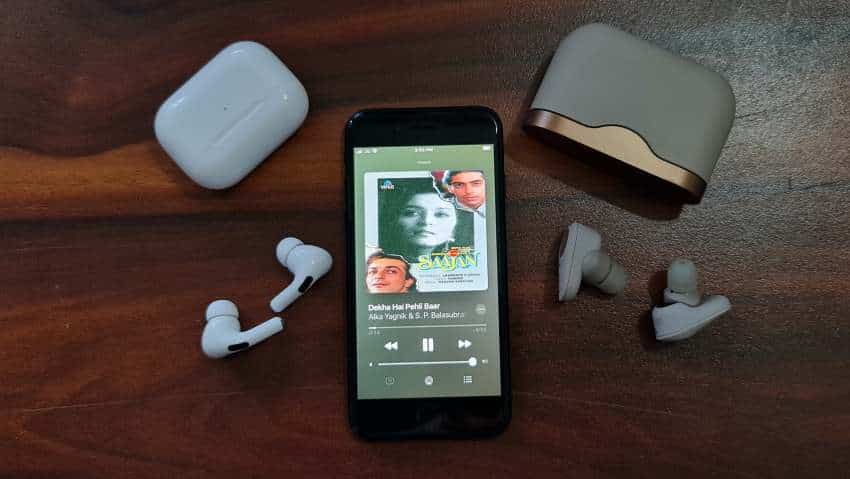 The latter deliver impressive bass, but the difference is noticeable when it comes to vocals-driven tracks where you seek more balanced audio profile. This is where the WF-1000XM3 deliver better clarity.

The reason why you are probably considering buying of these TWS is their noise cancelling abilities. Before we even talk about that, let me highlight that Sony WF-1000XM3’s in-ear design and elongated bud shape creates a vacuum in your ears, blocking most noises anyway. Then, it uses the QN1e HD noise cancelling processor which also powers top-end noise cancelling headphones of the company – WH-1000XM3 and WH-1000XM4. It certainly helps in better ANC, with users also having the option to customise it through Sony Headphones Connect app. 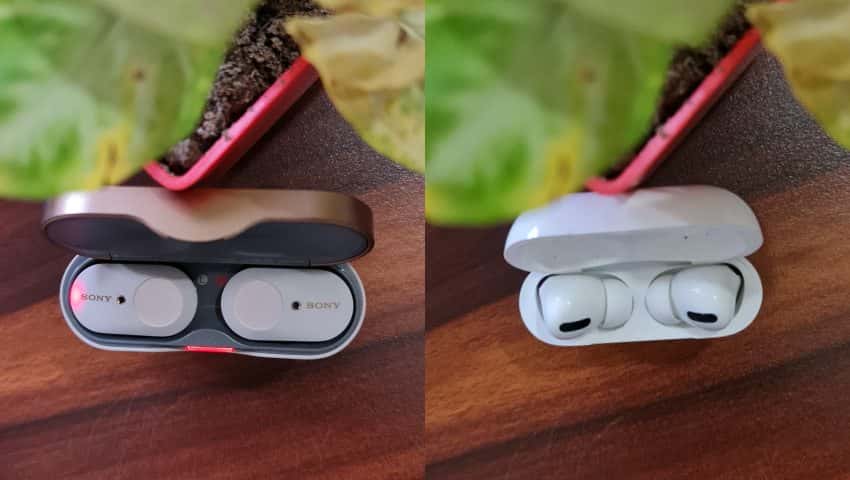 The Apple AirPods are also quite capable, blocking most vehicle noises when you are taking a walk around. But, the Sony WF-1000XM3 are slightly better. Also, the AirPods Pro don’t offer you different level of cancellation as per the surroundings.

It’s just sad that despite that comfortable fit and superior ANC, the Sony WF-1000XM3 can’t be your preferred option, if you plan to buy a TWS for workout sessions. They don’t come with any IP rating and might get damaged from water or sweat. The AirPods Pro, on the other hand, come with IPX4 rating which makes them more durable for running and gym sessions.

Again, the Sony-WF1000XM3 has fairly decent advantage over the Apple AirPods Pro. The earbuds last up to 6 hours with ANC turned on while the case offers an additional 24-hour battery life. This can be extended up to 32-hours with noise cancellation turned off. 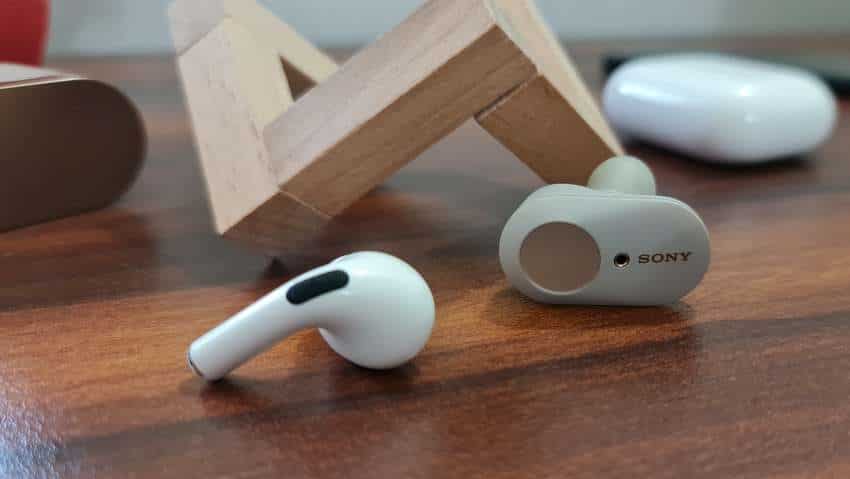 With the AirPods Pro, you only get 4.5 hours on the buds and 24 hours in total with the charging case. There is no way to extend the battery life here.

Sony WF-1000XM3 Vs Apple AirPods Pro: Which one should you buy?

It’s clear that both the TWS have their own set of advantages. There is not much to differentiate between the two when it comes to overall audio performance. The Apple AirPods Pro flaunt a more compact design, are lighter and come with IP Rating. Meanwhile, the Sony WF-1000XM3 are more comfortable, have better ANC and battery life.

What’s turns the tie in Sony’s favour is that the WF-1000XM3 are priced Rs 5000 less than the AirPods Pro, promising a better value for money.

#DeshKaZee: Federation of Western India Cine Employees comes out in support of ZEEL on Invesco matter, praises Dr Subhash Chandra for his vision