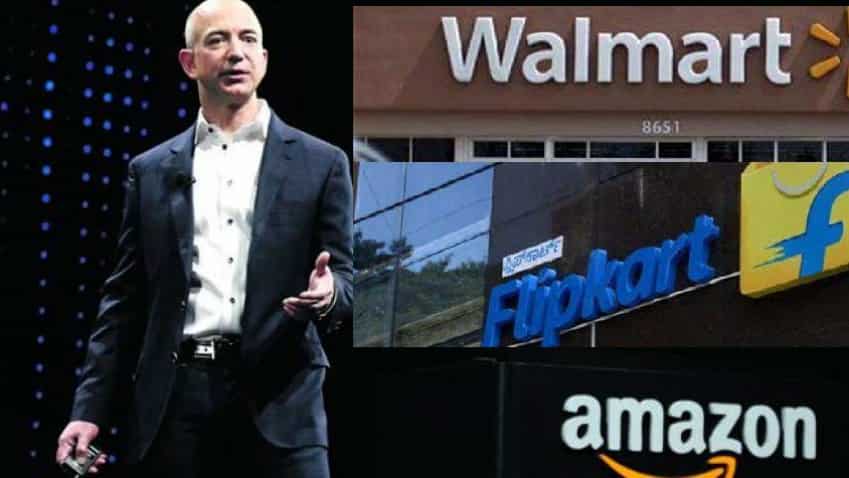 As for Bezos' Amazon, good days have surely arrived, and after its 5-year unending endeavour on Indian soil, the company has finally achieved the unthinkable. Photo: Reuters

The battle ground of e-commerce sector in India just got intensified! The US-based Amazon has left no stone unturned when it came to beating India's Flipkart in its attempt to lure customers. It has just been revealed, in a big shock to US retailer Walmart, which bought Flipkart recently, arch rival Amazon has beaten the Indian e-retail major! Yes, Jeff Bezos Amazon has taken over the lead in India's e-commerce industry in gross merchandise value (GMV), or gross sales, segment. This means, homegrown and largest online portal Flipkart is losing its momentum, which is a big blow to US-based offline retailer Walmart. Nothing seems to go right with Flipkart, since Walmart acquired it, as first the  company witnessed its founders' Sachin Bansal and Binny Bansal's exit, and now it is losing leadership at quite a speed  to Amazon. As for Bezos' Amazon, good days have surely arrived, and after its 5-year unending endeavour on Indian soil, the company has finally achieved the unthinkable.

A Barclays report revealed that, Amazon India witnessed gross sales of $7.5 billion in the year ended March 31, 2018, whereas Flipkart sales stood at $6.2 billion in the same fiscal. However, it needs to be noted that, Barclays report did not include Myntra sales, which is also under ambit of Flipkart, in the company's overall sales performance.

Meantime, the report highlighted that, Amazon and Flipkart's GMV which was neck-to-neck in FY17, resulted in a clear lead by Bezos' company in FY18.

In FY18, Amazon registered $7.5 billion on GMV as against $6.2 billion for Flipkart, driven by its B2C unit which continues to grow its lead over Flipkart’s B2C unit.

This comes as a big shock to Walmart, as the company, when it acquired Flipkart in June month, had mentioned that GMV of Flipkart would come around $7.5 billion by end of FY18 which included both Myntra and Jabong as well.

Walmart acquired India’s biggest e-retailer Flipkart for a behemoth $16 billion, making it the world’s largest e-commerce deal. Walmart acquired 77% stake in Bengaluru-based online shopping portal at  a valuation of around $21 billion. This was India’s largest FDI deal, and not only that, it was also the world’s largest ecommerce agreement. Since then, Walmart has reportedly, increased its stake quietly to over 80 per cent, according to reports.

For FY19, Barclays believes that Amazon India's gross sales are set to touch another milestone of $11.2 billion in FY19. While on similar lines it predicts that

Flipkart will record single-digit gross sales of $8.7 billion in FY19. This would give Amazon a lead of about 28% in terms of GMV.

The research by Barclays reveals quite interesting facts about these two rivals. As per the report, Amazon Web Services (AWS) revenues in India grew by over three times to $192 million in FY18, while Amazon Pay, launched at the end of FY17, witnessed 53X growth to rake in $61 million in FY18.

Interestingly, while Amazon has taken a leadership in gross sales and GMV, Barclays also notes that Flipkart stood as a leader in revenue terms. By end of FY18, Amazon India's e-commerce revenue came in at $3.1 billion, while Flipkart bagged $3.7 billion a couple of billions higher than the Bezos company.

But, Barclays also states, Flipkart continues to be bigger than Amazon in terms of revenue, although Amazon is catching up quickly and continues to grow much faster.

Finally, as Flipkart and Amazon make up a majority of India’s online retail, Barclays predicts that this would grow two-fold to $40-45 billion by 2020.

Recent key actions of Amazon's are also showing picture of immense competition ahead with Flipkart.

Just like offline channel Walmart knocked the door of e-retailer Flipkart, similarly, online major Amazon is in talks to join hands with India’s largest offline channel Future Retail. It is believed that Bezos and Future Group’s founder Kishore Biyani are negotiating an agreement.

Last year, Amazon has bought about 5% stake in Shoppers Stop.

Hence, the way Amazon is placing its bets in India, it would only be a matter of time for the company to snatch the leading position of Flipkart. It will be keenly watched how Flipkart under Walmart perform in coming fiscal years. Hence, the Game of Thrones between Walmart-Flipkart vs Amazon will be more than interesting to watch.