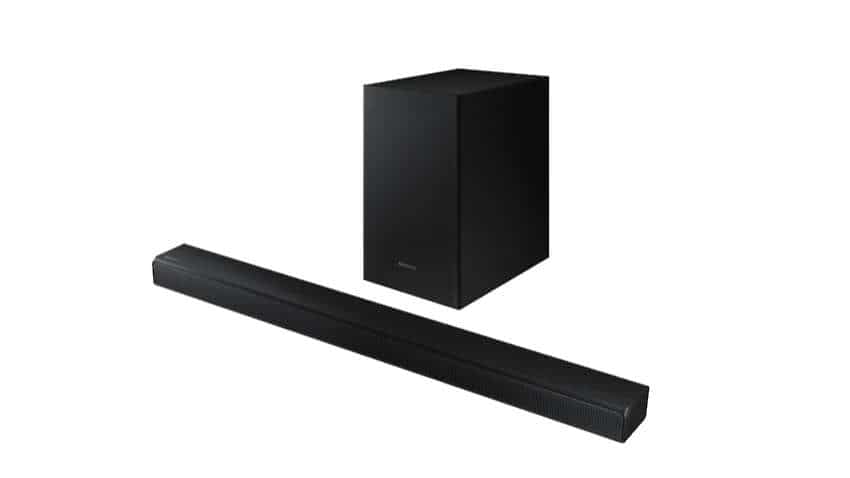 Samsung HW-T550 soundbar review: If you purchase a TV in 2020, you need to follow it up with a soundbar. That’s almost like the new normal and rightly so. Most television sets (at least entry-level and mid-range) come with sub-standard in-built speakers and limited audio output. Yet, spending on soundbars wasn’t considered an investment for long. That has changed with the popularity of OTT platforms which aim to virtually bring theatre to your living rooms. Also, the lockdown has made consumers realise the importance of a good audio device.

And, a lot of people keep asking us for budget recommendations that offer value for money without having to break the bank. The recently launched Samsung HW-T550 is one soundbar that flirts with this space. Priced at Rs 25,990, the soundbar comes with a wireless subwoofer, has support for Dolby Audio and offers several sound enhancement features.

We have used it for a couple of weeks and here is what we think of the Samsung HW-T550 soundbar.

Samsung HW-T550 soundbar: Inside the Box

The Samsung HW-T550 soundbar comes in a relatively compact retail box which was good to see. In fact, coincidentally I had the Sony HT-G700 and the Samsung HW-T550 boxes placed alongside and the latter has a significantly smaller packaging.

Inside the retail box, you get the main unit of the soundbar, the subwoofer and few cables for connectivity. These include two power cables with brick and an optical cable for TV. There are also mounting templates with brackets and screws, remote control with batteries and a manual which details the process to setup the device. 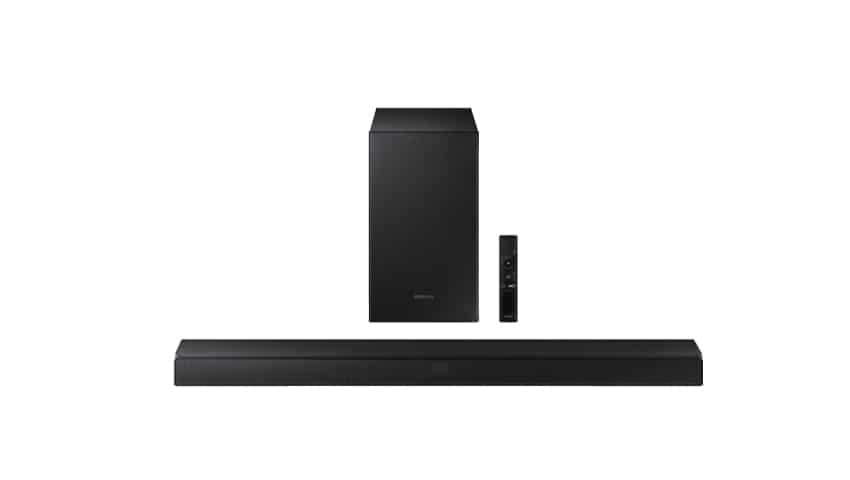 I was honestly surprised to see that there is no HDMI cable inside the box despite support for Enhanced Audio Return Channel or eARC. Samsung tells us that it’s because the output remains the same whether you use HDMI cable or optical cable. However, not all television sets may have an optical cable port. In that case you will have no option but buy a HDMI cable or use Bluetooth. Thankfully, I had one at home.

Also, the power cables come with Type A plug with two flat parallel pins which means you may have to buy connectors separately.

Setting up the soundbar is very easy. There are three ways to connect it to your TV – Bluetooth, HDMI or optical cable. Only the last has support for both DTS and Dolby Digital. To establish the connection, you need to plug in the soundbar and the subwoofer in separate power sockets before switching on the main unit. The subwoofer connects wirelessly to the bar. The only wired connection it has is its power cable. 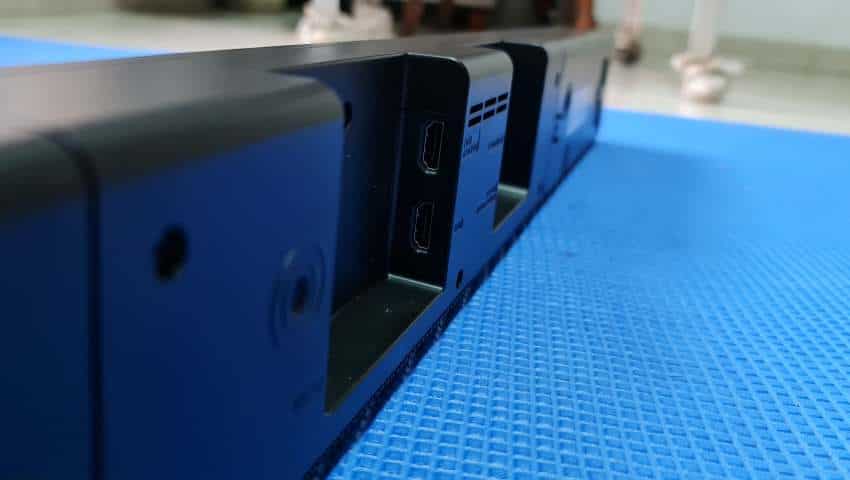 For other devices like smartphone, laptop or tablet, you can use Bluetooth which has fairly decent range. You can also connect two devices at the same time. This allows you to pause one playlist and play another on the second device.

The Samsung HW-T550 is one of the shorter soundbars I have tested in the recent times and was able to fit easily between my 49-inch smart TV. The main unit is slightly broad but not short so is unlikely to cover the screen, if placed on a table. The body of the bar is made of plastic and the front is covered by a metal grille. Samsung has used a good quality material which gives the bar a slightly premium look. 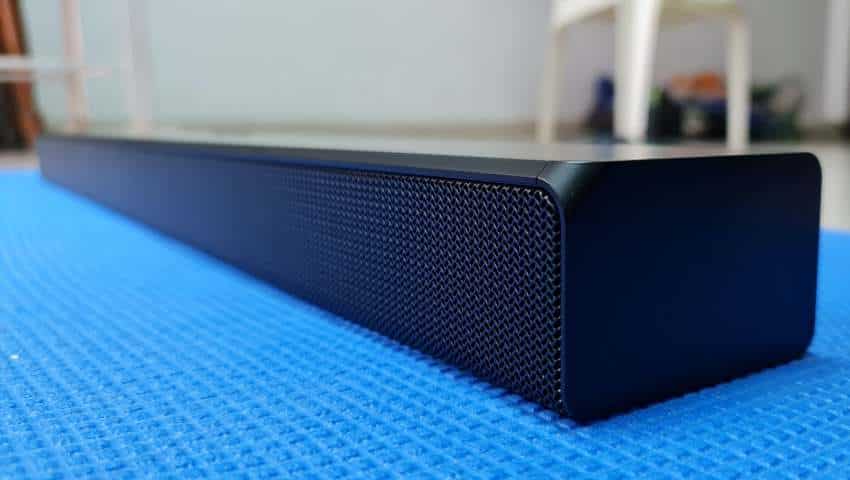 On the front you get a very small screen which shows you the mode being used, volume levels and other settings. The display is so small that it scrolls to show full text. The controls are present on top on the bar while ports are the back.

This is where I should mention that Samsung has ditched the 3.5 mm headphone jack on the soundbar so the option to use an Aux cable, goes out of the window. 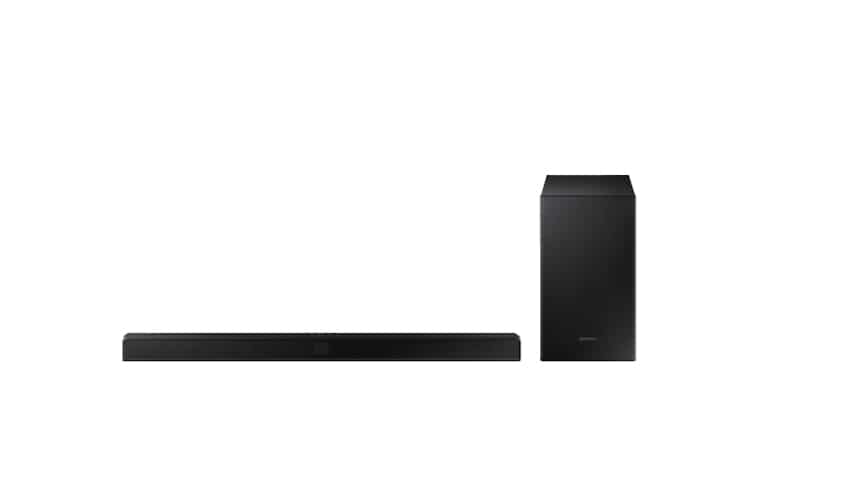 The subwoofer is very similar in terms of build quality. It is made from wood and has a fabric panel on the front. It’s not huge so can be placed almost anywhere.

The Samsung HW-T550 soundbar sounds excellent for the price. It has a deep bass and balance sound profile, which may not give you an explosive but surely a consistent output. As mentioned before, you get support for both Dolby Digital and DTS – the latter recreating sound to give you a 3D output. There is no Dolby Atmos but that’s a feature you will rarely find on entry-level soundbars. 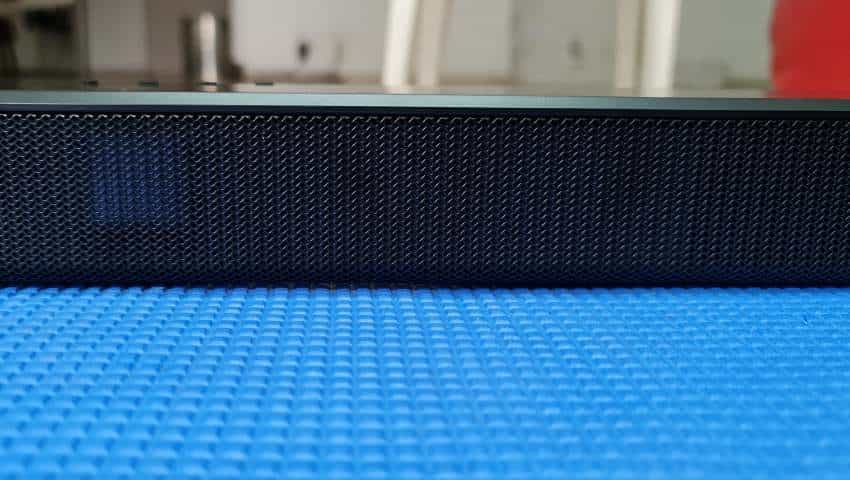 I had the soundbar connected to my TV mostly via HDMI but also used the optical cable to see if there is a difference in audio. The experience was very similar in both the cases.

The action sequences in ‘Project Power’ sounded great, dialogues were largely clear and there is hardly any distortion till around 90 per cent volume levels. The subwoofer delivers powerful and deep bass which enhances the background score.

I also watched a few episodes ‘Ozark’ and no matter how much Jason Bateman tried to whisper, somehow the dialogues were still audible. 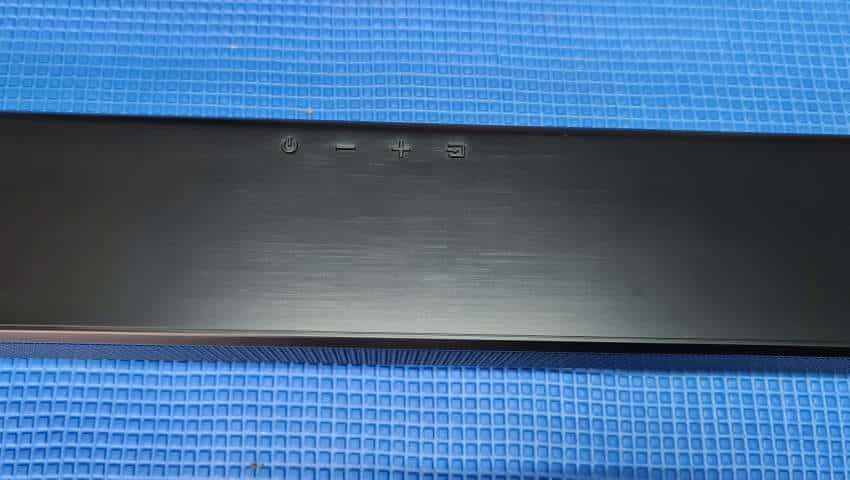 Music sounds equally soothing on the Samsung HW-T550. The instruments in ‘Malhar Jam’  can be heard clear while you can also feel extra bass kicking in Ritviz’s ‘Mukti’. The overall performance is good for the budget.

The surround sound, though, could have been better. You don’t get the most immersive experience and that reflects especially while watching movies.

One impressive feature is the power-saving mode which activates itself after being idle for 20 minutes. There is also support for HDMI CEC which basically syncs the soundbar audio with TV, allowing you to use latter’s remote for some basic functions.

The Samsung HW-T550 is an ideal setup for your first soundbar. It was launched at Rs 25,990 but is listed at Rs 21,990 on the Samsung website, which makes it an even more exciting deal. It offers a good overall performance on a tight budget. You get a balance output and impressive budget. But, if you want more features like Dolby Atoms support or a better surround sound, you can always push your budget and opt for a more expensive machine.