Samsung Galaxy A51 review: Fresh from the oven, the smartphone should allow the company to compete against Chinese manufacturers in the sub-Rs 25,000 segment, at least till they start flooding the market with their new devices. So, let's see if it is worth your money or not. 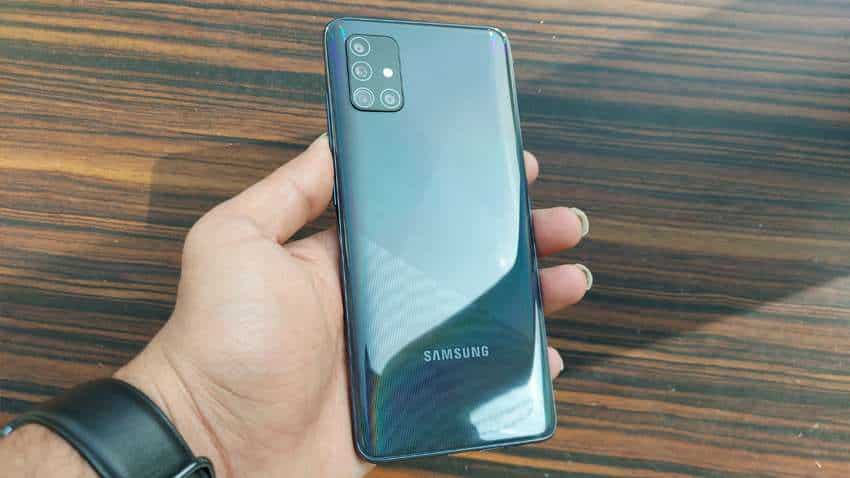 The Prism Crush finish at the back gives the phone Samsung Galaxy A51 a shiny glow.
Written By: Manas Tiwari
Edited By: Harish Dugh
RELATED NEWS

Samsung Galaxy A12 to launch in India next week | Check expected price, features and other details here

Samsung Galaxy A51 review: The first month of 2020 is about to end and more than half a dozen smartphones have already landed in India with Samsung alone bringing three to the country.  After launching Galaxy S10 Lite and Galaxy Note 10 Lite, the South Korean smartphone giant has also unveiled its new mid-range device - Galaxy A51, which follows last year's Galaxy A50 and Galaxy A50s in the Indian market. The smartphone strengthens Samsung's presence in the mid-range segment.

Fresh from the oven, the smartphone should allow the company to compete against Chinese manufacturers in the sub-Rs 25,000 segment, at least till they start flooding the market with their new devices. To make the Galaxy A51 more delicious, Samsung has added several new ingredients to the smartphone like the Infinity-O panel, an additional fourth camera at the back and some new 'Make in India' features.

It is tough to find an obvious competitor to the Galaxy A51 with only Vivo V17 and Redmi K20 Pro coming close in terms of both price and specs. We have been using the Galaxy A51 for almost a week. So, let's see if it is worth your money or not.

I was very impressed and surprised too, at how good the Samsung Galaxy A50s looked. And, the Galaxy A51 is in the same league as well. It comes with, what Samsung calls, the Prism Crush finish at the back which gives the phone a shiny glow. The actual difference is made by the colours used on this phone. 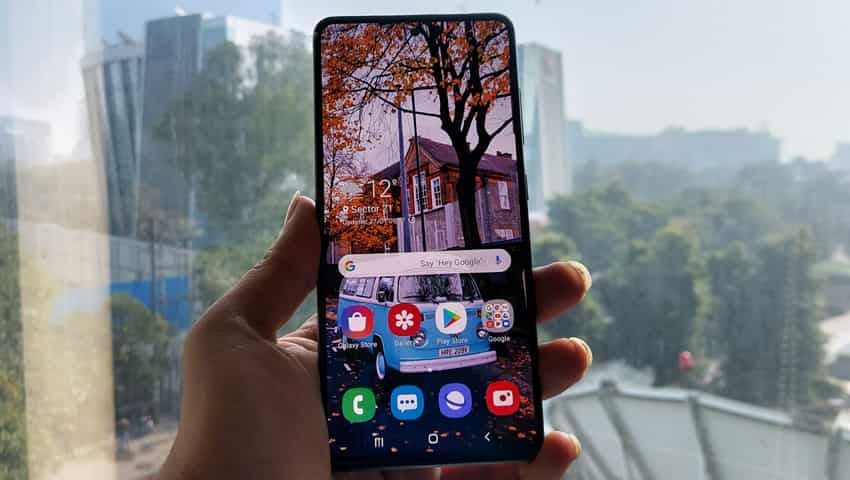 The Galaxy A51 has been launched in three colour options - Blue, White and Black. We had the black colour for review purposes which is good-looking, but I had a chance to see the blue colour which is simply stunning. Samsung has used a polycarbonate back on this phone instead of glass finish. It kind of works in favour of the device as the weight remains under check.

You do get a glossy finish which makes the phone a fingerprint magnet. I am losing count of how many times I have used this line in last six months. Almost every mid-range smartphone these days attracts fingerprints and somebody out there needs to address this issue.

Fortunately, you get a case inside the retail box to keep the phone clean.

The most significant change in terms of design is the L-shaped camera module at the back, which is similar to what the company has recently used on Note 10 Lite as well. It sits on the upper left corner housing four lenses and the LED flash. The power and volume buttons are on the right, USB Type-C port at the bottom with guess what - a 3.5mm headphone jack. 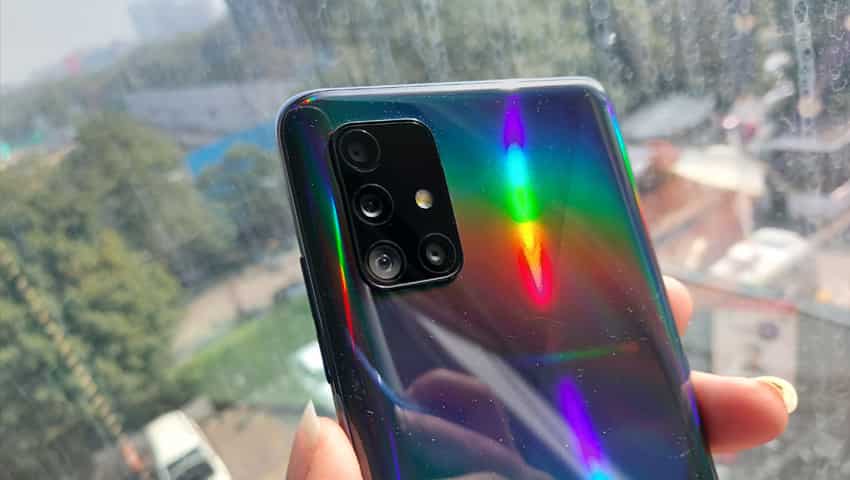 Samsung is also giving you a pair of earphones with the phone -- again something that is rare to find these days. 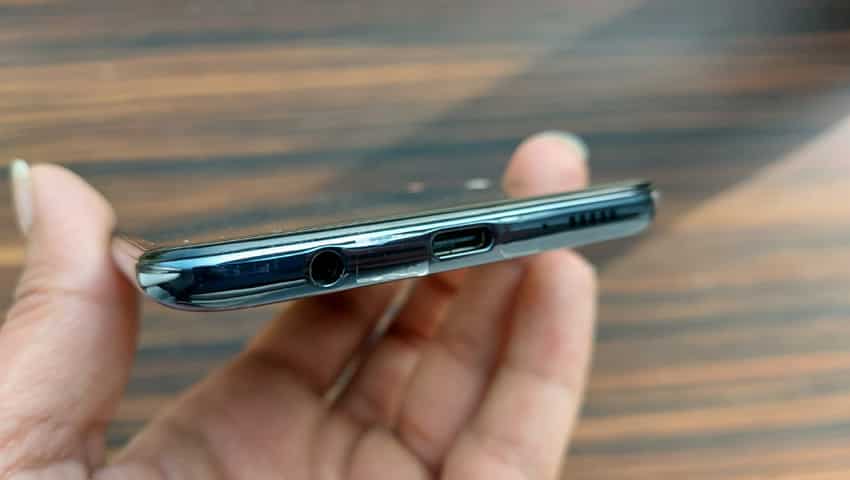 Overall, the smartphone looks quite amazing and is one of the most good-looking devices to have been launched in January 2020, probably even better than the S10 Lite and Note 10 Lite. The device is compact and perfect for one hand use. It feels premium, is built well and looks stunning.

It is becoming some sort of a story as to how Samsung manages to come up with such great displays. The colours are more punchy and vibrant than what you could find on any other smartphone in the market. The Galaxy A51 ships with a taller 6.5-inch Full HD Plus Super AMOLED display rather than the 6.4-inch screen found on its predecessor.

The front camera has been placed in an Infinity-O design, which the company has borrowed from its flagship level smartphones, and this helps it significantly reduce the bezels. Even though you don't get an edge-to-edge display, the screen-to-body ratio is quite impressive, making a visible difference while streaming videos and gaming. 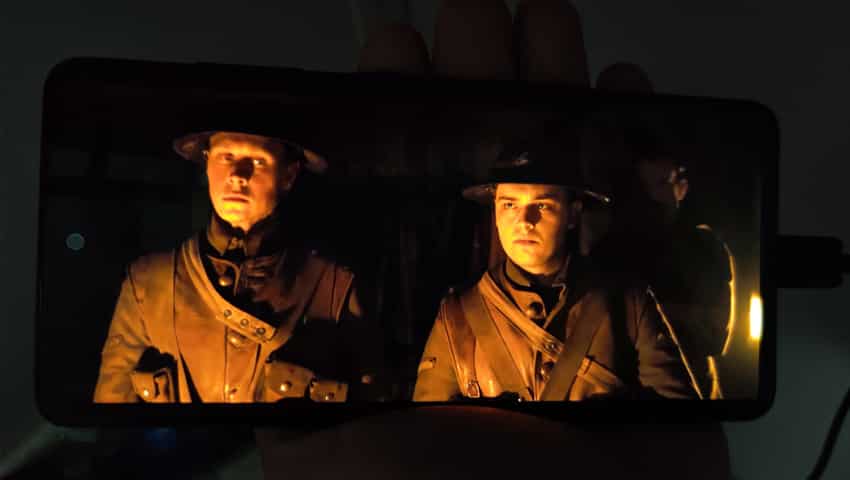 As I said before, colours on the screen are quite vibrant with good viewing angles. Even when you are out, the content is clearly visible under the sunlight, without having to reach peak brightness. The screen features a resolution of 1080 x 2400 pixels with 20:9 ratio.

The smartphone is protected by Gorilla Glass 3 and comes with a pre-applied screen protector.

Samsung has used an optical in-display fingerprint sensor on the Galaxy A51 and while it is good, it could have been better. The scanner is still not as fast as physical fingerprint scanner. There were several occasions, where I had to scan the fingerprint multiple times, just to get the accurate reading.

In terms of power, things don't change much. Samsung continues to use Exynos 9611 processor that was introduced on the Galaxy A50s last year with a promise to deliver better gaming experience. To recall, the Galaxy A50, on the other hand, ships with Exynos 9860 chipset.

It is paired with 6GB RAM and 8GB RAM options. However, the company has only announced the price of the 6GB RAM model as of now. It will cost you Rs 23,999. Both the models come with 128GB of internal storage, expandable up to 512GB with a microSD card.

While this is not the most powerful chipset, you don't face much trouble even while running high-end games such as PUBG Mobile, Asphalt 9 and Call of Duty Mobile. I did face some lag while running ePES 2020, which was surprising but it could also be because of internet connection. 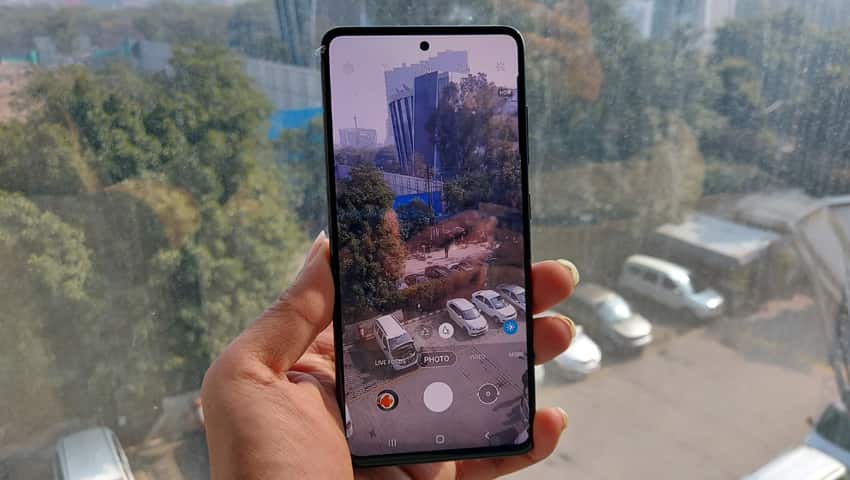 It is worth mentioning that this is the first Samsung smartphone to ship with One UI 2.0 on top of Android 10 out of the box. This is again a bold step by Samsung as most companies prefer to introduce the new operating system on a flaghship-level device. The review unit we had, has also received an update which claims to have improved the security of the device and camera stability.

With the new OS, you get updated navigation gestures, Dark Mode, Game Launcher, Dual Messenger and more. There is also Dolby Atmos support for audio but it only works with earphones or Bluetooth headsets.

Coming to the battery, you get the same 4000mAh battery with 15W fast charging support that was also packed inside the Galaxy A50s. Samsung promises 19 hours of video play back time. With medium usage, you can expect the smartphone to last one full day.

For the first time, Samsung has brought a quad camera setup to its Galaxy A series. It includes a 48-megapixel main camera, 12-megapixel Ultra Wide lens with Night Mode capability, 5-megapixel Macro lens and 5-megapixel depth sensor. On the front, you get a 32-megapixel selfie camera with ability to click portrait shots. 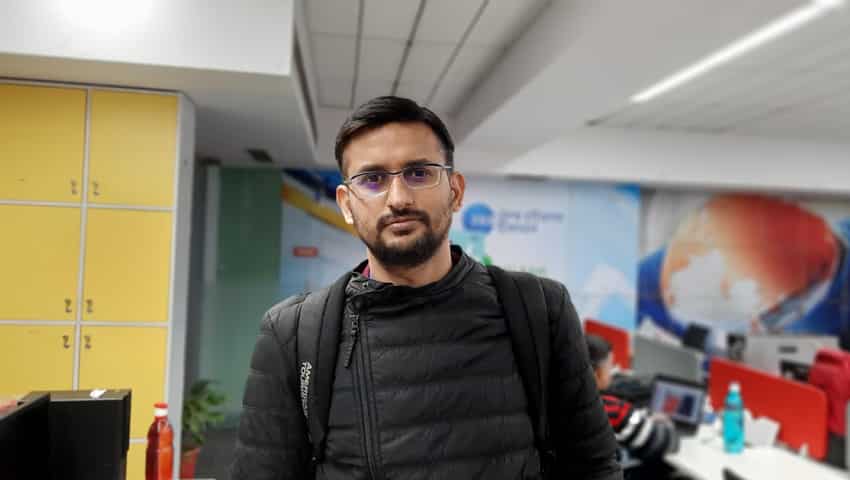 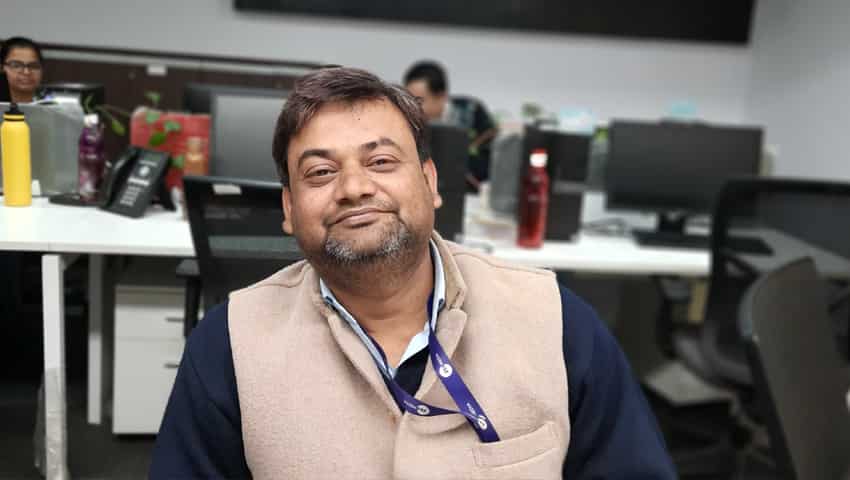 The main lens captures good images with a lot of details. In the Live Focus mode, there is a clear difference between the subject and the background with almost the right amount of blur. It is probably the most impressive part about the camera, both front and rear.

The new member in the Camera module is the macro lens that allows you to capture subjects from a closer distance. Samsung has done well with the lens but you need to have really steady hands to ensure that the images are not blur. For some reason, you need to select the macro mode from options and it is not available in the camera UI. 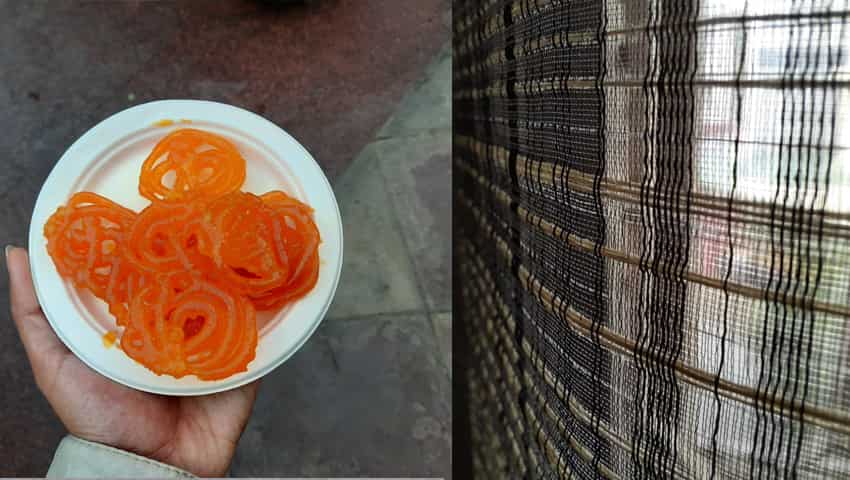 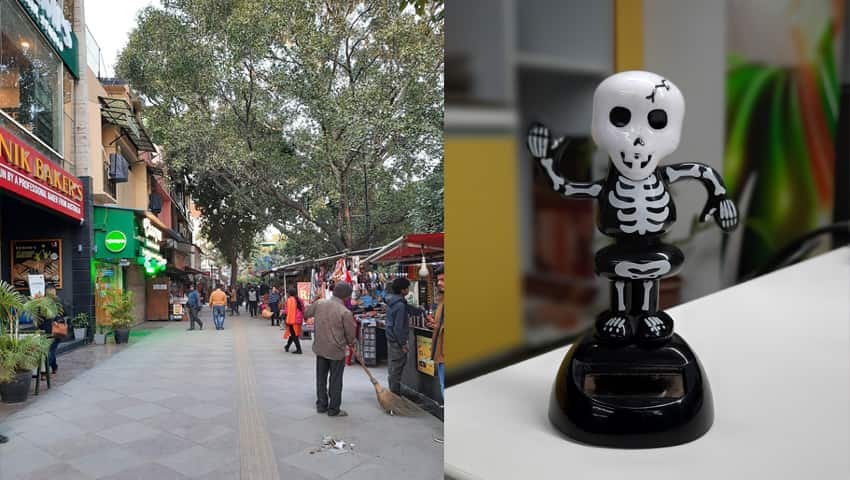 The image processing is slightly slower than expected and the smartphone takes a few seconds to generate the image, after you click it. 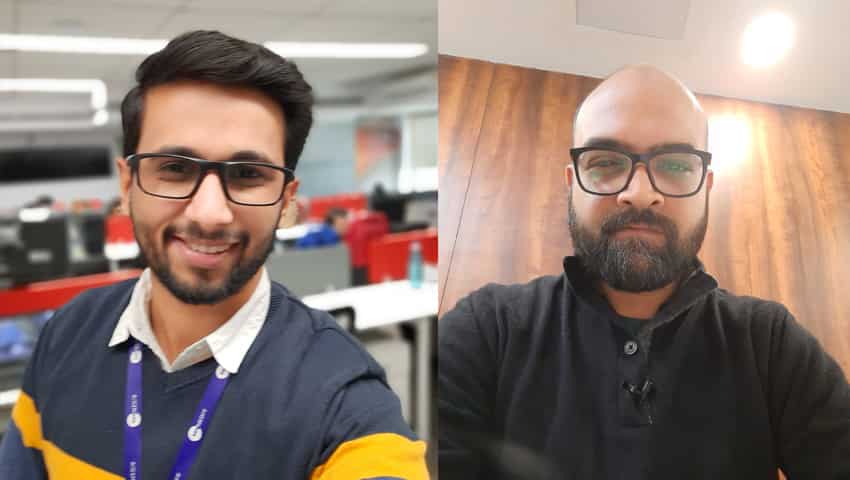 The smartphone has Scene Optimizer that can recognize up to 30 different scenes and adjust the colour, contrast and brightness to optimize image quality. It has also got AR Doodle that allows you to add line drawings or handwriting to the environment. We will try to show you more of this in our video review of the Samsung Galaxy A51.

There are four Make for India features on this device as well - Useful Cards that create folders in your message inbox, finder, multilingual typing and smart crop - which we might use over the next few days and review separately.

Priced at Rs 23,999 for its base model, the Samsung Galaxy A51 offers you a lot more than vivo V17, but is slightly behind the Redmi K20 Pro on the performance front. Nevertheless, it is a smartphone that comes with a decent chipset, absolutely amazing display, top-quality cameras and a stunning design. This is a phone that you could flaunt and the new software only adds to the ease of using.

Samsung Galaxy A12 to launch in India next week | Check expected price, features and other details here