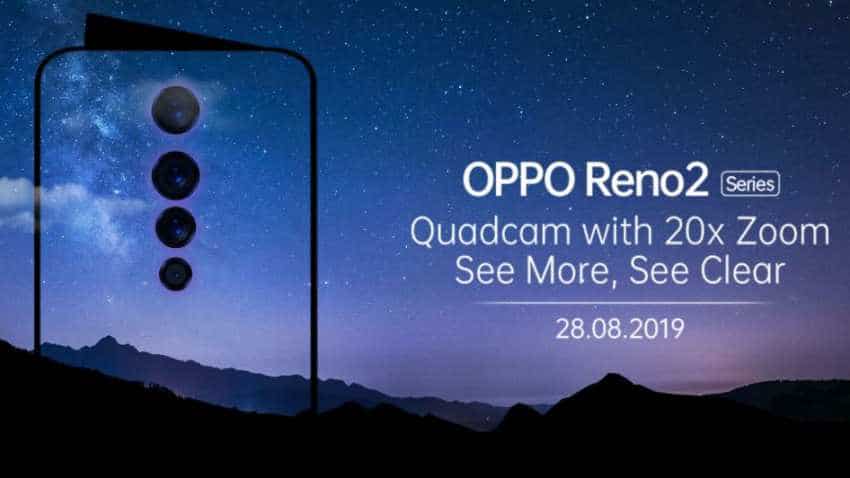 The Oppo Reno 20X zoom may eventually be launched in other markets too but no official word has been made on the same.
Written By: ZeeBiz WebTeam
RELATED NEWS

Oppo is set to launch the Oppo Reno 2 – a successor to the Oppo Reno launched earlier this year – in India on August 28. The smartphone would come with 20X zoom capability and quad rear camera setup. The Chinese smartphone manufacturer confirmed the launch by posting a teaser of the new phone on its social media pages. It also confirmed that India will be the first market to receive the Oppo Reno 2, unlike its predecessor which was launched in China first.
The teaser suggests that the latest offering by Oppo would come with a side-swing selfie camera technique similar to the Oppo Reno series. It would be interesting to see if the company will launch only device or ‘Oppo Reno 2 series’ would be unveiled at the event. The Oppo Reno and Oppo Reno 10X Zoom phones were unveiled in April and were launched in India in May this year.

A dedicated page for the smartphone has also gone live on Oppo’s website which confirms the 20X zoom feature and the presence of a quad-camera module at the back of the device. The page also confirms that the Oppo Reno 2 will come with an ‘Ultra Steady Video’ mode and an ‘Ultra Dark Mode’.

Launched earlier this year, the Oppo Reno series featured a triple rear camera setup in the Oppo Reno 10X Zoom edition while the standard Oppo Reno model came with a dual rear camera. The series competes against the OnePlus 7 series, the Honor 20 series and the Redmi K20 series in the Indian market.

The Oppo Reno 20X zoom may eventually be launched in other markets too but no official word has been made on the same.