OnePlus 7 Pro pre-booking to start today: Here is what we know about this flagship so far

It's official! OnePlus fans have another reason to cheer as the Chinese smartphone manufacturer has announced the date of pre-booking for the smartphone. 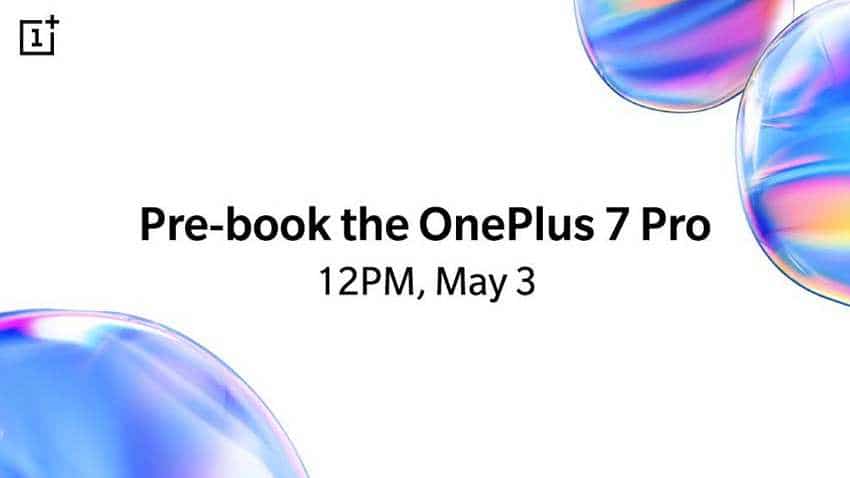 It's official! OnePlus fans have another reason to cheer as the Chinese smartphone manufacturer has announced the date of pre-booking for the smartphone. In a tweet on Thursday, OnePlus said that pre-bookings for its latest flagship will begin on May 3 at 12 noon. "It's happening! Pre-booking for the #OnePlus7Pro starts 12pm tomorrow Watch this space," OnePlus tweeted. The announcement came days after the company had announced that the smartphone will be launched on May 14. The latest tweet did not talk about the price of the phone or any other details.

Earlier, in a statement, OnePlus had said that its new devices will be launched simultaneously in three regions for the first time - India, USA and Europe. In India, the new OnePlus devices will ne launched at an event at Bangalore International Exhibition Centre, Bengaluru on Tuesday, 14th May 2019 at 8:15 pm IST. "We will be unveiling a device of the future that features exquisite craftsmanship and breakthrough technologies," OnePlus said.

The entry vouchers for the launch event went on sale from OnePlus' official website oneplus.in on April 25, 2019. The event will also be attended by the OnePlus community. OnePlus claims it to be the biggest ever community event with more than 8,000 attendees worldwide.

It's happening! Pre-booking for the #OnePlus7Pro starts 12pm tomorrow

What to expect from OnePlus 7 Pro

OnePlus 7 Pro is expected to come with a 90Hz Quad HD+ AMOLED display with curved edges. It is likley to get rid of the display notch with a pop-up selfie camera, similar to Oppo and Vivo flagships. The display will also come with an in-display optical fingerprint sensor. The flagship is expected to use Qualcomm Snapdragon 855 chipset and offer up to 12GB RAM as well as 256GB storage.

The smartphone manufacturer has hinted at a triple rear camera setup with the primary unit being a 48-megapixel Sony sensor while the other two cameras being a 16-megapixel wide-angle camera and an 8-megapixel telephoto camera. The smartphone will be powered by a 4000mAh battery and will come with Warp Charge 30 fast charging.