Priced at Rs 34,999, the phone comes bundled with Moto TurboPower Pack mod which serves as an additional battery for the device. 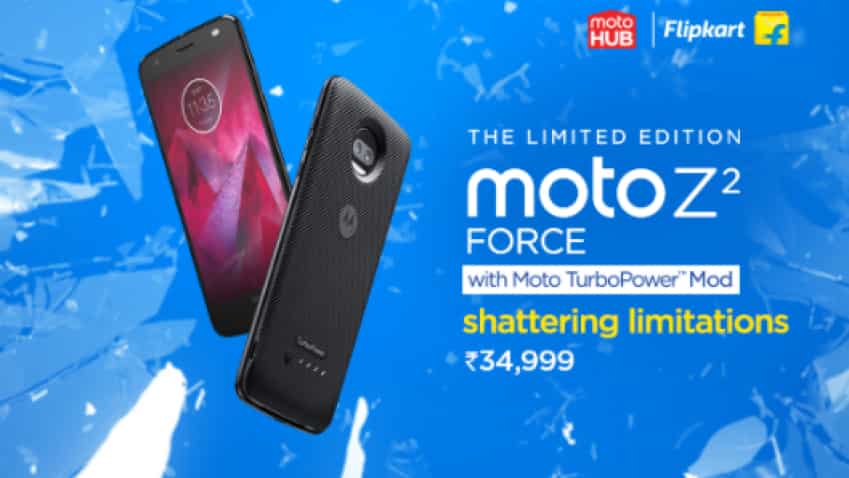 The Moto Z2 Force has the shatterproof display, which as per Motorola, cannot be broken with normal drops.

The new device comes with flagship grade hardware to justify the price tag and boasts of a dual camera setup at the back too. The Moto Z2 Force joins the company’s lineup of smartphones such as Moto Z2 Play, Moto X4, Moto G5S Plus, said Telecom Talk report.

At the front of the phone, the Moto Z2 Force has a 5.5-inch QHD display with a resolution of 2560 x 1440 pixels. With a P-OLED panel with the shatterproof coating on top, the new spartphone is powered with Qualcomm Snapdragon 835 chipset, said the report.

It comes in a single 6GB RAM, 64GB storage model, and its storage can be expanded up to 2TB with a microSD card slot.

With dual camera setup at the back, Moto Z2 Force boasts of two 12MP sensors at the rear with f/2.0 aperture, PDAF, Laser Autofocus, and dual-tone LED flash.

The rear cameras are capable of recording 4K videos at 30fps. Up front, there’s a 5MP sensor for selfies and video calls. The secondary 12MP sensor is a RGB sensor, the report said.

The new device boots Android 8.0 Oreo out of the box, and is backed by a 2,730mAh battery with TurboCharging support.

Motorola is also bundling TurboPower Pack mod with the Z2 Force, and it adds additional 3490mAh battery taking the overall battery capacity to 6220mAh. Also, the smartphone is extremely thin at 6.1mm. It offers all the connectivity options such as 4G LTE, VoLTE, Wi-Fi 802.11 ac, Bluetooth, USB Type-C port and NFC, said TelecomTalk.

Priced at Rs 34,999, the phone comes bundled with Moto TurboPower Pack mod which serves as an additional battery for the device.

The Moto Z2 Force will be up for sale on Flipkart and Moto Hubs across the country from tonight.