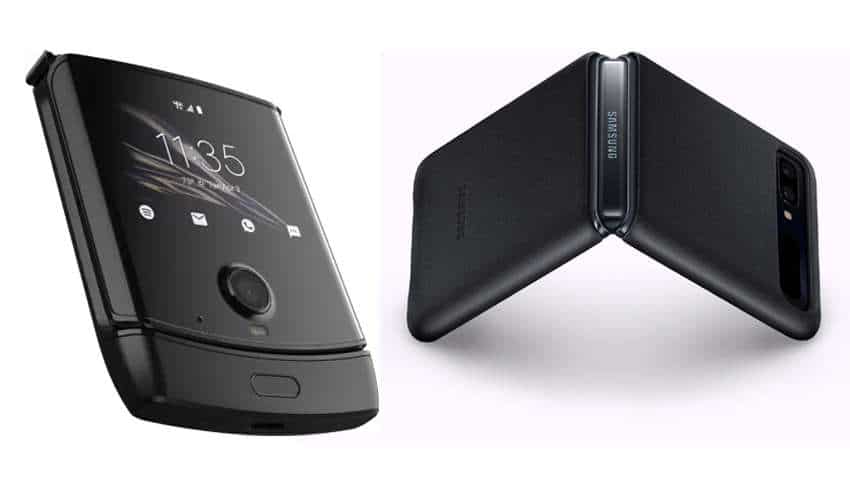 Both the smartphones come in clamshell design, are trying to offer something new but are expensive. Source - Motorola, Samsung website.
Written By: ZeeBiz WebTeam
Edited By: Harish Dugh
RELATED NEWS

Moto Razr vs Samsung Galaxy Z Flip: As expected, 2020 is when we are witnessing the foldable smartphones coming into their own. The devices unveiled last year were raw and you can already see improvements with the launch of Moto Razr and Samsung Galaxy Z Flip. Both the smartphones come in clamshell design, are trying to offer something new but are expensive. So, which foldable smartphone should you spend on? Here is a detailed look at both the devices which will help make an informed decision.

The Motorola Razr price in India starts at Rs 1,24,999, making it the more expensive offering. It will be available from April 2 in offline stores and on Flipkart. The Galaxy Z Flip has been priced at Rs 1,09,999 and is already selling in the country.

Motorola Razr is 6.2-inches when unfolded with HD resolution at 2142 x 876p. When folded, it offers you a cover display of 2.7-inches with a resolution of 600 x 800p. The Galaxy Z Flip, on the other hand, features a Full HD+ display of 6.7-inches. On top, it comes with a smaller 1.1-inch Super AMOLED display. The Motorola smartphone is an eSIM-only device while Z Flip is dual-SIM with support for a nano-SIM and an eSIM feature. The eSIM connectivity is only being offered by Airtel and Jio in India right now.

The Galaxy Z Flip is powered by Qualcomm Snapdragon 855+ processor and comes with 256GB storage and 8GB RAM. It packs dual battery with 3300 mAh battery capacity and a 15W charger inside the box. The Motorola Razr comes with the older Qualcomm Snapdragon 710 processor and has 6GB RAM and 128GB storage to offer. It packs a smaller 2510 mAh battery.

The Motorola smartphone has a single 16MP camera which can be used for selfies as well. The Galaxy Z Flip has dual rear cameras, which includes a 12MP wide-angle camera and a secondary 12MP ultrawide-angle camera. The front camera on the Z Flip is 10MP.