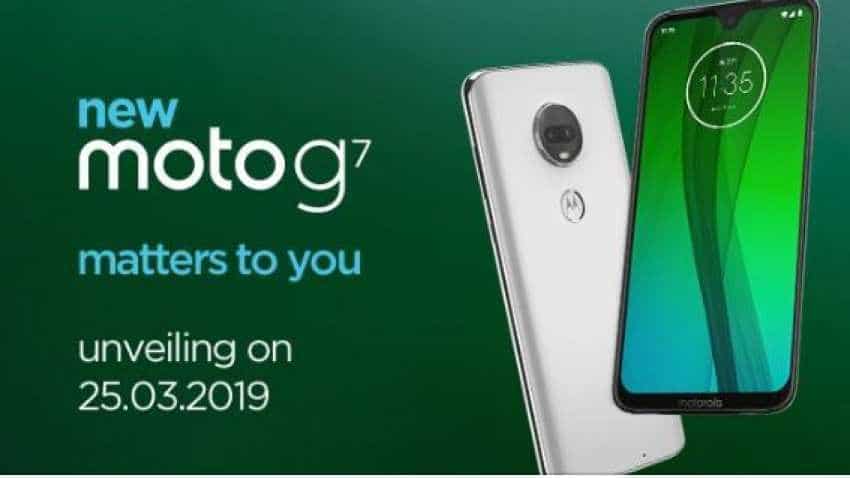 Motorola unveiled its new Moto G7-series of smartphones last week at an event in Brazil. Now, the smartphone maker is all set to launch Moto G7 in India today. Notably, the same device has already been launched in Brazil last month, along with Moto G7 Play, Moto G7 Plus, and Moto G7 Power. Moto G7, which is all set to be launched in the country, comes with features including a 6.24-inch full-HD+ screen and is powered by Snapdragon 632 SoC.

The new Moto device, which was launched with a price tag of $299 (around Rs 20,700),  is expected to cost between Rs 15,000 and Rs 20,000, according to reports. If we look at price of Moto G7 Power, launched in India last month at Rs 13,822, the new Moto phone, which will be available online as well as offline retail stores, is guessed to be available in colour options of Ceramic Black and Clear White in India, as it was unveiled with similar colours in Brazil.

According to information available, Moto G7 is likely to sport 3D glass build with a layer of P2i water repellent coating, besides featuring dual-SIM smartphone packed with a 6.24-inch full-HD+ (1080x2270 pixels) Max Vision display with 19:9 aspect ratio and 403ppi pixel density. The device is powered by the octa-core Qualcomm Snapdragon 632 SoC clocked at 1.8GHz, paired with 4GB of RAM, and is protected by a layer of Corning Gorilla Glass 3.

Let the Friyay vibes .. take over, coz the new #motog7 with creative camera modes is launching soon! Show us how #creativitymatterstoyou with your Friday pictures as you live it up, and stand a chance to win the #motog7! T&C apply- https://t.co/22CVVO4u1j pic.twitter.com/42ZgYc2Jji

The Moto smartphone is handled by 4G VoLTE, Bluetooth v4.2, Wi-Fi 802.11 a/b/g/n, GPS/ A-GPS, a 3.5mm headphone jack, along with a USB Type-C port. Sporting a 3,000mAh battery with support for 15W TurboPower fast charging, Moto G7 comes with 64GB of internal storage, which can further be expanded, via a microSD card, up to 512GB.