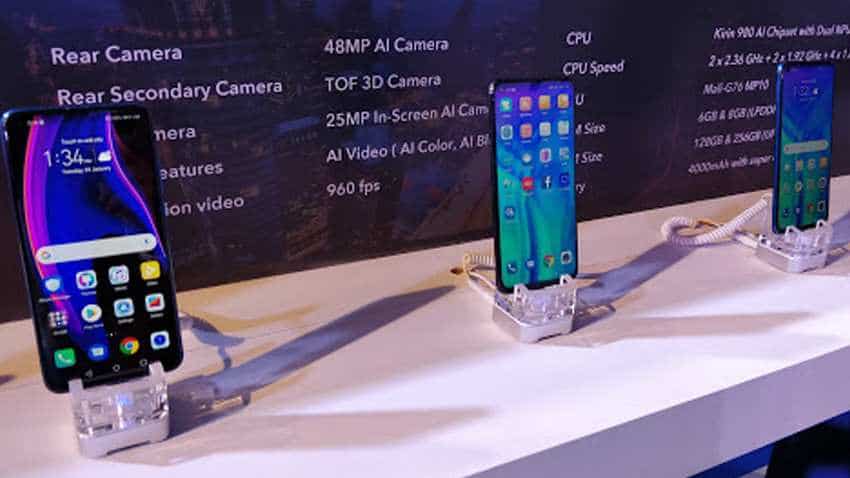 Huawei's sub-brand Honor launched its new flagship smartphone - Honor View20 in India on Tuesday afternoon - with as many as eight world's first technologies. These include 48MP AI Camera, All-View Display (world’s first in-screen front camera design) Kirin 980 AI chipset with Dual NPU manufactured by 7nm process, A76-cortex based CPU, Mali-G76 GPU, 1.4Gbps cat21. Modem and SoC Supporting 2133MHz LPDDR4X RAM. Priced at Rs 37,999 for the base model of 6GB RAM and 128GB storage, the smartphone is set to take on OnePlus 6T in the Indian market and will be available for sale on Amazon.in from 12 noon on January 30. The top variant of the smartphone - 8GB RAM and 258GB storage - has been priced at Rs 45,999.

Allen Wang, Vice President, Huawei India, said that the phone speaks of Honor's commitment to deliver premium and power packed smartphones. "We are positive that the smartphone will be a great success in India," he said. Wang said that Honor's flagship series stands for great style, great design and great experience. He added that Honor's innovation can help all people and the company is happy about it.

Honor View20 has been launched in two variants - 6GB RAM and 128GB storage, 8GB RAM and 256GB storage. It is powered by Kirin 980 AI processor and sports world's first 7nm mobile AI chipset with world’s first dual NPU. The technology improves phone speed by 20%, power efficiency by 40% as compared to the 10nm chipset.

It also has a 3D camera which is capable of creating a new dimension in photography and videography, and brings greater usability and fun. The camera collects information on the shapes of objects based upon the time-of-flight of light signals to enable depth sensing, skeletal tracking and real-time motion capture.

Another striking feature about Honor View20's powerful camera is that it can turn into a motion-controlled gaming console, allowing you to play 3D motion games like never before. The camera supports Fancy Skiing and Fancy Darts which can be downloaded from Google play store.

The Chinese smartphone manufacturer has introduced world's first in-screen front camera design with Honor View20. It comes with a 25MP AI camera on the front and 91.8% screen-to-touch body ratio. It is also the first smartphone to use nanolithography to create a nanotexture - a vivid and dynamic V-shape color gradient with gleaming effect on the body.