Former West Indies captain and two-time T20 World Cup winner Darren Sammy backs the role of technology in cricket but believes that better laws are required for correct implementation. In a special episode of Tech Talks, Sammy recalled how data analysis and technology helped him prepare better against opposition. 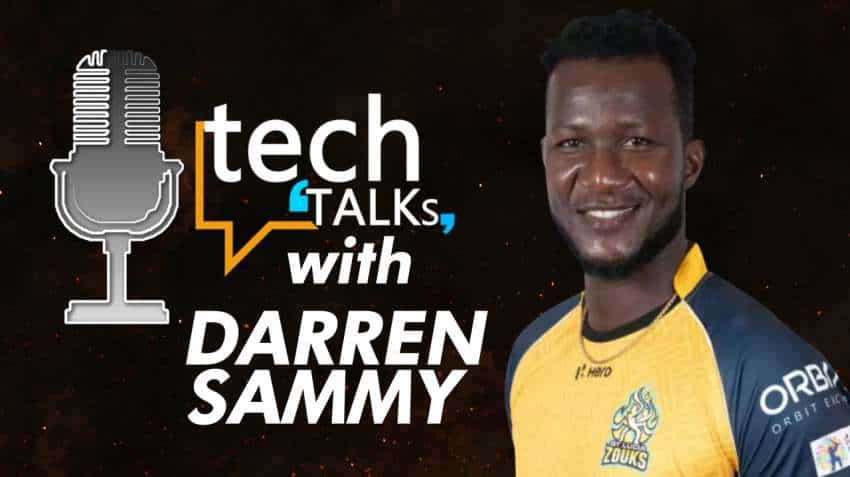 Among his other accolades, the 36-year-old will be remembered taking Sachin Tendulkar’s catch in the latter’s last Test inning.
Written By: Manas Tiwari
Edited By: Harish Dugh

Former West Indies captain and two-time T20 World Cup winner Darren Sammy backs the role of technology in cricket but believes that better laws are required for correct implementation. In a special episode of Tech Talks, Sammy recalled how data analysis and technology helped him prepare better against opposition. Sammy led the Saint Lucia Zoucks to the CPL final, where the side lost to Kerion Pollard-led Trinbago Knight Riders.

“Everything has its pros and cons. For me, I paid a lot more attention to the data collected by our analyst Shankar (also with Kings XI Punjab) in this year’s CPL. That data helped me make decisions out there. That’s an advantage you get over the opposition,” Sammy said, in an exclusive conversation with Zee Business.

He added that the downside to this is that you score a hundred today and all that information is in opponent’s hands. So, they dissect your technique, your game and, they make a plan against you.

“As professionals, people like Virat Kohli and Joe Root, plan accordingly. So, by the time opposition plans against you, the game has improved,” Sammy explained.

However, the all-rounder was quick to underline the importance of technology in on-field operations. Using the short-run example from the Kings XI Punjab and Delhi Capitals game, Sammy said better laws are required in the game.

“Also, technology on the field of play should be used to enhance the game. I was watching Kings XI Punjab’s first game. This is the team I am supporting this year. When that short run was given, my son asked me ‘Daddy, please tell me that run will not cost them the game’. I said, 12 runs are needed and the guys are batting well. It did. If you were using technology better, someone should have pointed that out to the umpires. But, to do that, you need better laws. I am all for technology,” he said.

For those unaware, a wrong short-run call was given against Punjab in their opening IPL match against Delhi. The match ended as a tie, with Delhi winning the super over, costing KL Rahul-led side two important points.

What is that one gadget you don’t travel without?

What is that one app you use the most?

It has to be between WhatsApp and Instagram. Fifty-Fifty.

Who is the most tech-savy cricketer you have played with?

This is an interesting one. I think the little Bravo, Darren Bravo.

Who is that one player who really struggles with technology?

He is not going to like it, Andre Fletcher. Among Indians, when I was with Sunrisers Hyderabad, Shikhar was not on any social media platform. Now, he is killing it. Maybe, someone taught him.

Among his other accolades, the 36-year-old will be remembered taking Sachin Tendulkar’s catch in the latter’s last Test inning. What followed was truly a never-seen-before moment in cricket. Instead of celebrating, an emotional Sammy was on his knees.

“When I gave the ball to Narsingh Deonarine to get the breakthrough. When Sachin went for that cut shot, the ball flew and I was trying to protect myself. Because of the reflexes, I caught it. I could hear a pin drop silence at the Wankhede. That’s when I realised the magnitude of that wicket. I was part of the history and I couldn’t bring myself to celebrate,” the then West Indies captain, recalled.