Digital Ostriches: People are now spending more than 5 hours a day on smartphones

Smartphones are now the most used gadget the world over. A few users spend as much as seven hours a day on smartphones. Interestingly the report pointed out that users spend more time on their smartphones in emerging countries than in developed countries. Image Source: IANS
Written By: ZeeBiz WebTeam
RELATED NEWS

Average time spent on smartphones amounts to nearly five hours every day, key insights of a research report by Counterpoint revealed on Wednesday.

“Almost half of respondents (details of the survey methodology given below) spent more than five hours per day on their smartphone,” the report showed.

Data traffic is also expected to grow on the back of burgeoning smartphone usage.

To add a bit of context, a report by CRISIL in July this year pointed out that mobile data usage is expected to grow four-fold in the coming years. Subscribers are expected to consume as high as 7395 billion megabytes in FY18 in India alone, the report said.

“Additionally, one in four users now spend more than seven hours every day on their smartphone, these are true power users mostly running businesses on their phones or consuming digital content for long hours,” it added. 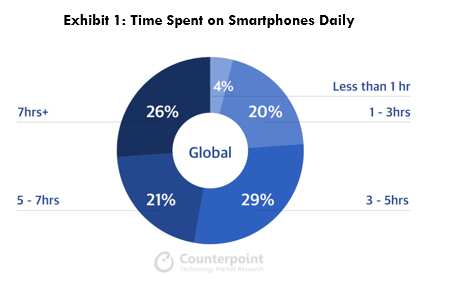 Interestingly the report pointed out that users spend more time on their smartphones in emerging countries than in developed countries.

“Malaysian consumers spend most time on their smartphones across regions. More than 55% of users reported that they spend more than five hours per day on their smartphone. This trend will be prevalent in most emerging markets,” the report said.

“Japanese smartphone users spend the least time with their smartphones. 43% claimed to spend less than three hours per day on their device,” the report added.

The highest use of smartphones was cited as for browsing the internet followed by playing games online.

Annual spending on smartphones was cited as $370 billion.

“In just a decade, smartphones have become central to people’s lives from communication to content consumption to commerce perspective. As a result, people are now spending more time on their smartphones than any other device,” the report said.