Asus has launched its latest gaming laptop - the dual-screen ROG Zephyrus Duo 15 which is built around the new Core i9-10980HK CPU and GeForce RTX 2080 Super GPU. 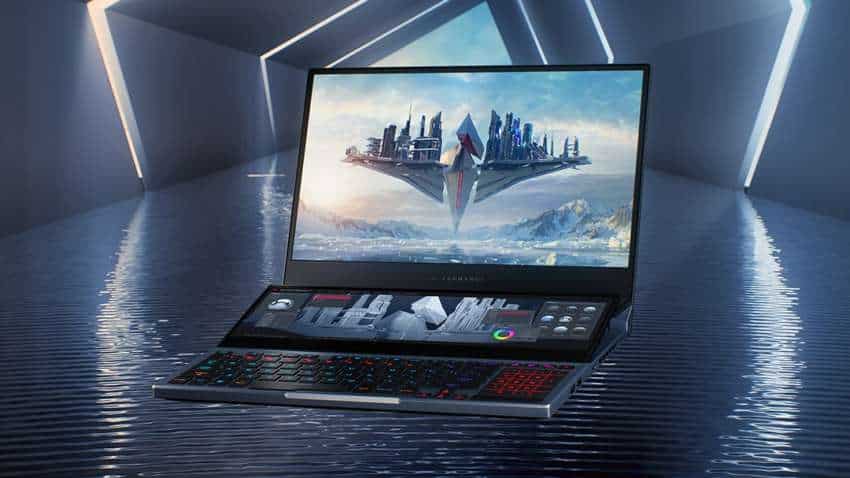 Asus has launched its latest gaming laptop - the dual-screen ROG Zephyrus Duo 15 which is built around the new Core i9-10980HK CPU and GeForce RTX 2080 Super GPU. The biggest highlight of the laptop is its secondary screen which will allow gamers to have multiple monitors on the desktop for streaming, chat apps, game guides, and general multitasking.

The ROG Zephyrus Duo 15 features an "active aerodynamic" cooling system, an optional 300Hz full-HD screen, and per-key RGB-backlit keyboard. It features a secondary ROG ScreenPad Plus screen that runs the full width of the laptop. It is positioned above the keyboard.

The laptop comes with a 15.6-inch primary display that gives you the option to choose between between 4K 60Hz and full-HD at 300Hz. The secondary screen is of 14 inches and has a resolution of 3840x1100. Notably, only the second screen supports touch.

Asus has designed a hinge that allows it to be raised at a 13-degree angle, which improves usability and visibility, but also opens up a large intake vent for the cooling system.

The company is said to be working with game and software developers to optimise features such as in-game chats, stats, and guides for the secondary screen and for touch controls. The ROG Zephyrus Duo 15 is 210mm thick and weighs 2.4kg.

The laptop has 16GB of DDR4-3200 RAM with a free SODIMM slot allowing up to 32GB more to be added. It comes with a 90Wh battery can be recharged using the bundled 240W charger or any USB Type-C Power Delivery adapter up to 65W when not gaming.