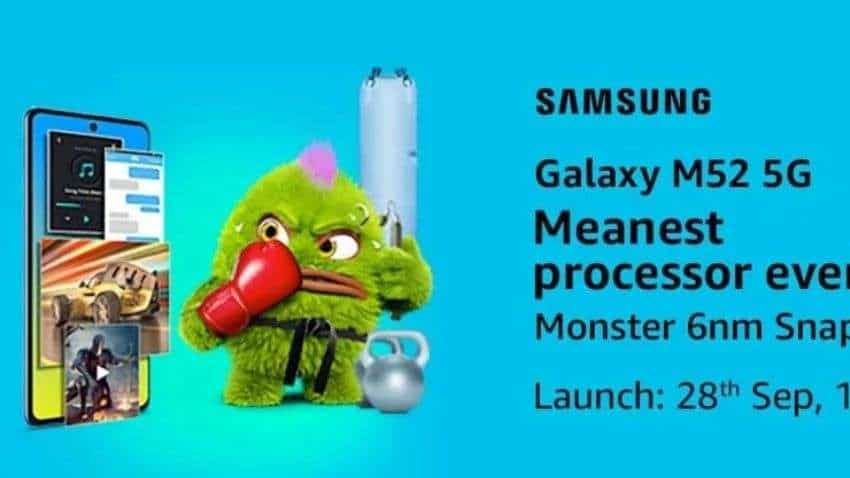 Samsung Galaxy M52 5G launch date: South Korean tech giant Samsung is all set to launch its new M-series smartphone in India soon. The company will launch Samsung Galaxy M52 5G in India on September 28, 2021 at 12 PM, and it will be available for purchase on the e-commerce platform Amazon.

Samsung Galaxy M52 5G will be powered by the Snapdragon 778G chipset, a listing Amazon India has confirmed. The official teasers have so far revealed that it will be sporting an AMOLED panel that offers a high refresh rate and a triple camera unit.

The launch will take place at 12pm on the slated date. The launch event will be streamed live on Samsung’s official website, YouTube channel, social media handles such as Twitter, and also on Amazon India website. The Amazon teaser page reveals some details about the Samsung Galaxy M52 5G. It reveals that the smartphone will be “leanest. Meanest. Monster. Ever”.

Samsung Galaxy M52 5G will include a triple rear camera module paired with LED flash, side mounted fingerprint sensor, hole punch display that will include single shooter. The power and volume keys sit right above the fingerprint sensor on the right side. So far, the company hasn’t revealed any further official details about the Samsung Galaxy M52 5G smartphone, but rumours have suggested some of the key specifications and features.