Realme introduced the GT and GT Master Edition, just a few months ago. The upcoming Realme GT Neo 2 is going to join the lineup. 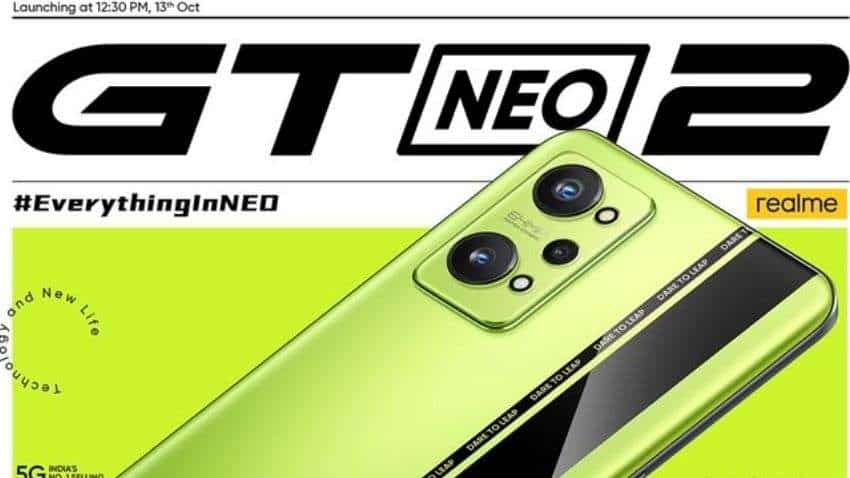 Realme introduced the GT and GT Master Edition, just a few months ago.

Realme GT Neo 2 launch: Finally! we have good news for Realme fans in India as Chinese smartphone brand Realme has confirmed the launch of its upcoming smartphone — Realme GT Neo 2 in India. The smartphone is all set to go official in the county this festive season. The launch date is set for September 13 at 12:30 PM during the live virtual event.

The company wrote in a media invite: "We would like to invite you to join us on Wednesday, 13th October at 12.30 P.M. The event will be streamed live on Realme's social media platforms, YouTube and Facebook. We are looking forward to e-meet you! Day & Date: Wednesday, October 13, 2021 Time: 12.30 P.M."

Realme introduced the GT and GT Master Edition, just a few months ago. The upcoming Realme GT Neo 2 is going to join the lineup. Ahead of the official release, the smartphone manufacturer has revealed some of the key specifications of the Realme GT Neo 2.

"As a 5G Leader and the world’s fastest-growing smartphone brand, Realme recently introduced its flagship killer Realme GT series, with a focus on the chipset, fast charging, VC cooling, and many more aesthetics of technology. Continuing our successful 5G momentum and embarking on a new growth chapter in our Realme GT 5G series, we are prepared to take a leap once again and announce the launch of our neo flagship, Realme GT NEO 2 5G," the smartphone brand said.

According to the company, Realme GT NEO 2 5G, will be a neo flagship killer and a premium mid-range that will strike the perfect balance and will bring one of the fastest 5G processors, Qualcomm Snapdragon 870 5G, an amazing 120Hz E4 Amoled display & 65W Dart Charge. It will also comprise a massive battery with extraordinary battery life, stainless steel vapour cooling plus, an astonishing camera, and an industry-exclusive color.

In addition to some of the key specifications, the design of the upcoming Realme GT Neo 2 has been revealed. As per the teaser, the smartphone will arrive in a unique green color with a triple rear camera system paired with LED flash.

Realme 9 Pro+ India launch confirmed - What we know so far