Oneplus has joined hands with chip-maker MediaTek for Dimensity 1200-AI, which will be featured in the upcoming OnePlus Nord 2 5G smartphone. 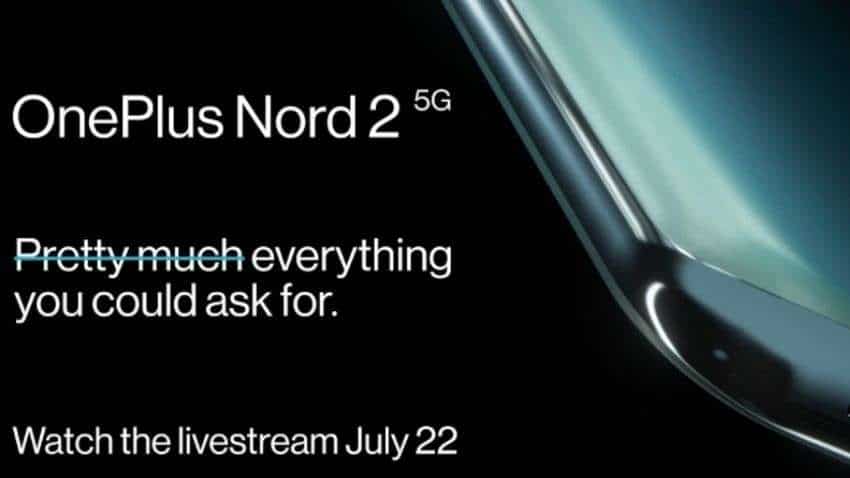 OnePlus will live stream the OnePlus Nord launch event at 7:30 PM. The event will stream live on the OnePlus India website, social media platforms, and on Youtube. Interested viewers can also watch the live event here.

"Nord 2 comes with a 6.43-inch 90 Hz Fluid AMOLED display that swipes so smooth you’ll think your fingers are dancing ballet. And it’s HDR 10+ certified," the OnePlus India wrote from its Twitter account.

Earlier, OnePlus Chief Executive Officer (CEO) Pete Lau announced the official launch date of this smartphone to be 22 July 2021. This phone comes after the huge success of its two previous Nord series smartphones in India

Oneplus has joined hands with chip-maker MediaTek for Dimensity 1200-AI, which will be featured in the upcoming OnePlus Nord 2 5G smartphone. In order to highlight the new AI capabilities of the chipset, OnePlus and MediaTek have chosen the name Dimensity 1200-AI to distinguish it from the standard Dimensity 1200.

According to Lau, the OnePlus Nord 2 5G is a comprehensive upgrade from the first OnePlus Nord, from camera to performance to charging, as well as the newly AI-focused Dimensity 1200-AI SoC.

The Mediatek chipset that will power the Nord 2 will be a customized version by OnePlus, specifically tailored for improved response during gaming and a better photography experience. The AI hardware will come with support for DOL-HDR, which means capturing several exposures simultaneously to reduce ghosting.

Also, the company recently took to the micro-blogging site Twitter and announced that Buds Pro will be launch on July 22 at 7:30 PM during the live virtual event.

"If these Buds were any more professional, they’d be wearing a necktie. Stay tuned for the OnePlus Nord: Part Deux Launch Event on July 22, 7:30 pm for a 2-in-1 product launch, featuring the OnePlus Nord 2 5G and OnePlus Buds Pro," the company wrote on Twitter.