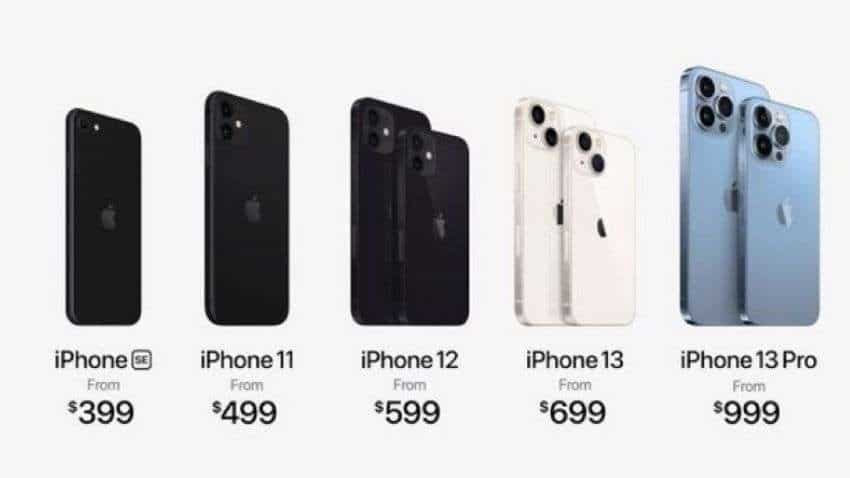 Apple iPhone 13 launch live update: The stage is finally set for the biggest smartphone launch event today! The US-based tech giant Apple will be hosting its special “California Streaming” launch event today at 10:30 pm IST. The company is expected to launch the most awaited iPhone 13 series, Apple Watch Series 7, and AirPods 3 during an online event.

Chief Executive Officer of Apple Tim Cook is Live now. The event started with updates about Apple TV+ and announces new shows including The Morning Show, a Tom Hanks show, See season 2, and so on.

New Apple iPad designed to ensure a great productivity experience. It will support the first-generation Apple Pencil. It will ship with iPadOS 15.

Apple also launches the new iPad Mini. iPad mini has a 8.3-inch screen with Touch ID as part of the top button. The brand is promising a 40 per cent jump in CPU performance compared to the previous generation iPad mini and a massive jump in GPU performance as well. It runs the A13 Bionic chipset as well. Oh, and the iPad mini has a USB-C port now. You can connect it to your camera, laptop, any other device. It also supports 5G.

Apple Watch Series 7 will be available at starting price $399

Apple’s iPhone 13 has officially arrived. It has a new look at the back with the camera lenses arranged diagonally. The notch is 20 per cent smaller with all the Face ID sensors packed in a smaller space.

Thee iPhone 13 starts at $799 for the base 128GB model. The iPhone 13 mini starts at $699. India price yet to be announced. Apple iPhone 13 is backed by the powerful A15 Bionic chipset. It has a six-core CPU with 2 high-performance cores and 4 efficiency cores and laso comes with a 4-core GPU. It has a 16-core Neural engine for machine learning tasks. The display has 1200 nits brightness and the XDR display promises a brighter, richer experience for users. The display sizes are 6.1-inch and 5.4-inches for the iPhone 13 and iPhone 13 mini.

The iPhones come with 12 MP ultrawide camera that offers cinematic mode, portrait mode for video. The cinematic mode allows rack focusing and shoots in Dolby Vision HDR. The iPhone 13 comes with IP68 water resistance and flat OLED display. It will be available in pink, blue, red, black and white colour options. The iPhone 13 and iPhone 13 Mini feature a 6.1-inch and a 5.4-inch display respectively. They also offer 800 nits brightness and 1,200 nits HDR peak brightness. Both are powered by A15 Bionic chipset and come with Dolby Vision, HDR10, and HLG support.

The iPhone 13 Pro series gets the 120 Hz ProMotion refresh rate on the display. The brand is also adding macro photography on the iPhone 13 Pro. The ultra-wide lens can be used to zoom in and magnify the object. All three cameras also support Night mode.

The company is expected to launch at least four new smartphones - iPhone 13, iPhone 13 Mini, iPhone 13 Pro, and iPhone 13 Pro Max. Ahead of the official launch, Apple iPhone 13’s complete range along with the iPhone 13 prices and features have been leaked by an Apple Hub, a blog site that covers the latest about Apple has come up with everything you need to know about the upcoming iPhone 13 series.

The devices are said to be powered by Apple's next-generation A15 chip manufactured based on TSMC's 5nm+ process. The entire iPhone 13 range is also expected to sport the LiDAR sensor. The sensor first appeared in the latest generation iPad Pro in March this year followed by the iPhone 12 Pro and iPhone 12 Pro Max.

The Cupertino-based tech giant will increase the price of the upcoming iPhones to compensate for rising chip production costs. Apple may also launch Watch Series 7 with a smaller "S7" chip, potentially providing more space for a larger battery or other components.

This new chipset will be built from Taiwanese supplier ASE Technology. On its website, ASE Technology confirmed that its double-sided technology will allow for module miniaturisation. The Apple Watch Series 7 will come in various screen sizes from 41mm to 45mm. The 45mm version is said to pack a 1.9-inch screen with a resolution of 396 x 484 pixels. The company is expected to release the new generation of its smartwatch and budget TWS earbuds.

UP hikes sugarcane purchase price by Rs 25 per quintal