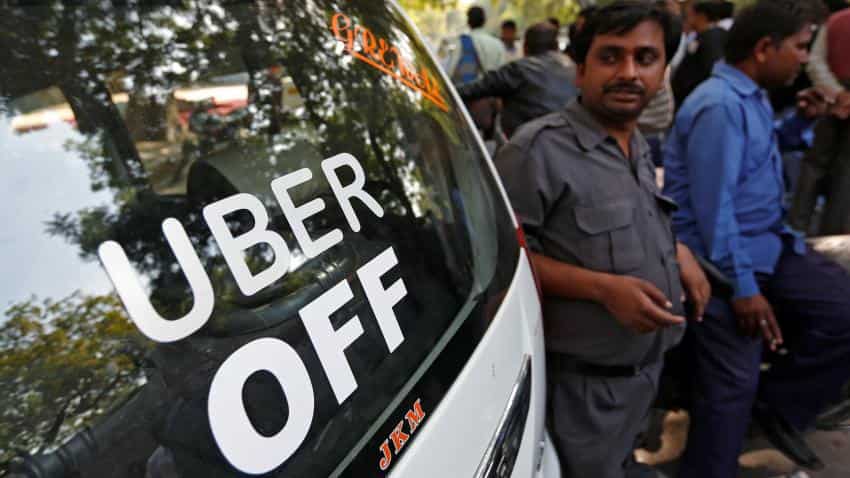 Jain said, “Uber is at heart an entrepreneurial activity. Earnings are not one size fits all.” Image Source: Reuters
Written By: ZeeBiz WebTeam
RELATED NEWS

Driving an Uber cab for up to six hours a day would make the cabbies earn up to Rs 2,500 per day while the least would amount to Rs 1,500 a day, Uber India President, Amit Jain said on Friday.

“Individual driver earnings vary widely and individual driver behaviour – where, when and how much or little drivers choose to drive – also vary widely, which makes averages difficult. Currently, 80% of drivers across India who are online for more than six hours a day make between Rs 1,500 and Rs 2,500 net, after Uber’s service fee,” Jain said.

The concept of hourly wages does not exist at Uber like that of a private driver and/or tax drivers, ‘where people have set hours and set hourly wages,’ Jain said adding, “Uber is at heart an entrepreneurial activity. Earnings are not one size fits all.”

“Drivers earn money from fares paid by riders, but also from incentives (for instance a driver may earn a certain amount of money once they’ve hit a certain number of trips). These incentives vary widely by individual drivers. They are dynamic, as is our business model, and we are constantly seeking to understand, assess and improve both earnings from fares and our incentives structure,” Jain said.

The app-based taxi hailing company is expecting an increase in hiring, making it ‘the most attractive choice.’

“The future of our business depends on making driving with Uber the most attractive choice. And as our business has grown over three years in India, we are seeing sustainable earning opportunities for driver partners and sustained interest in driving with Uber, with a 60% year-on-year increase in driver sign ups in January 2017,” Jain said.

App-based taxi hailing companies like Uber and Olacabs were offering monetary incentives to their drivers for completing a set number of rides every day.

On answering a frequently asked question on whether drivers are earning more or less now, Jain said, “Driver earnings have evolved over time and while some drivers do earn less than three years ago, we believe that driver earnings in India are attractive for the majority even after reductions in incentives and drivers’ costs are taken into account.”

The company said that the driver incentives was not the only thing they had to look into keeping in mind the affordability of rides so as to expand their business.

Jain said that drivers at Uber were categorized into two types – low end and high end drivers where the former would be driving for typically short distances and would reject rides more frequently and stick only to a particular area; while the latter would prioritise driving at peak demand periods when incentives and by extension earning potential, are highest and drive in the entire city.

Speaking about the protesting of drivers, Jain said, “Small numbers of individuals, who do not represent the majority of the driver community, have been preventing drivers who want to work from doing so. We have been communicating daily to drivers – through phone support, text and video messages and in person at our green light centres, where every day thousands of drivers walk in to resolve their concerns.”

He further added, “With sustained high demand from both riders and drivers we can shift from startup mode to a more sustainable business model and begin reducing higher levels of incentives, and invest more in drivers and our products for the long term.”