The Life Insurance Corporation (LIC) of India launched a new pension policy - Jeevan Shant - recently. The policy came as a surprise to many as it comes with a deffered annuity option. 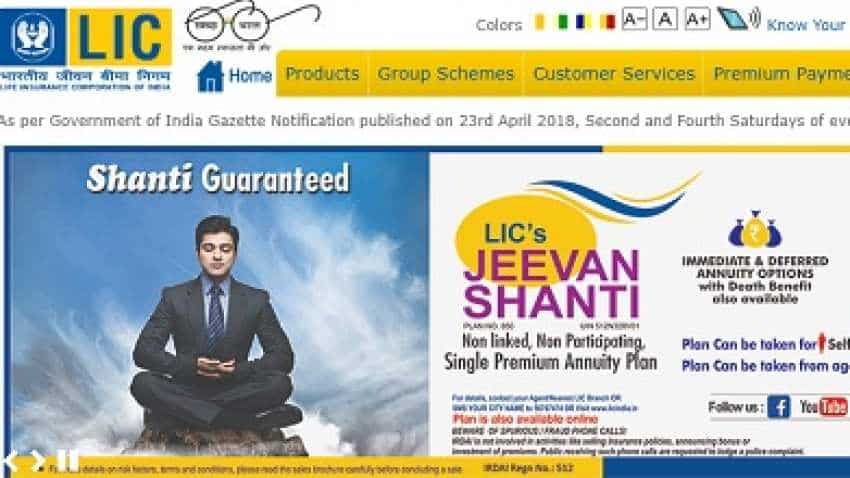 The Life Insurance Corporation (LIC)of India launched a new pension policy - Jeevan Shanti - recently. The policy came as a surprise to many as it comes with a deffered annuity option. The previous popular pension scheme offered by the LIC was Jeevan Akshay for non-government pension seekers. The Jeevan Akshay scheme comes with the single option of an immediate annuity. For the deferred annuity, before Jeevan Shanti, LIC had a Jeevan Nidhi plan, which provides insurance cover also. The third pension scheme provided by LIC is Pradhan Mantri Vaya Vandana Yojana (PVVY). This scheme is only for senior citizens about 60 years of age.

Following is a comparison of the three pension schemes offered by LIC:

LIC Jeevan Akshay pension plan: This is an immediate annuity plan, which can be purchased by paying a lump sum amount. LIC says, "The plan provides for annuity payments of a stated amount throughout the lifetime of the annuitant. Various options are available for the type and mode of payment of annuities." The Jeevan Akshay Plan offers several types of annuity:

The amount of annuity fixed under the Jeevan Akshay plan is assured throughout life of the annuitant. In case of death of the pensioner during the guarantee paid, the annuity is paid to the nominee till the end of the guaranteed period after which the same ceases. The annuity ceases if a person purchased the plan with annuity payable for life at a uniform rate.

LIC Jeevan Shanti pension plan: This is the latest pension plan announced by LIC. Unlike the Jeevan Akshay pension plan of the LIC, Jeevan Shanti plan comes with an option of deffered annuity, apart from the immediate annuity. You can invest a lumpsum amount today to get an assured sum as pension on a regular basis immediately, or on a deffered. As per the official LIC website, "This is a single premium plan wherein the Policyholder has an option to choose an Immediate or Deferred annuity."

"The annuity rates are guaranteed at the inception of the policy for both Immediate and Deferred Annuity and annuities are payable throughout the lifetime of Annuitant(s)," says LIC. The minimum purchase price is Rs 150,000, while there is no upper limit.

Pradhan Mantri Vaya Vandana Yojana (PVVY): Only senior citizens above 60 years of age can invest in this pension scheme. In the Union Budget 2018-19, Finance Minister Arun Jaitley had announced the enhancement of maximum limit under Pradhan Mantri Vaya Vandana Yojana to Rs. 15 lakhs per senior citizen. The period of sale for the scheme was extended up to 31st March, 2020. A senior citizen can purchase the scheme by making payment of a lump sum purchase price. The scheme also comes with loan facility. The scheme was launched with a guaranteed interest of 8% for 10 years. The scheme is operated only by LIC.

a. On survival of the Pensioner during the policy term of 10 years, pension in arrears (at the end of each period as per mode chosen) shall be payable.

b. Death Benefit: On the death of the Pensioner during the policy term of 10 years, the Purchase Price shall be refunded to the beneficiary.

c. Maturity Benefit: On survival of the pensioner to the end of the policy term of 10 years, Purchase price along with final pension installment shall be payable.

Jeevan Nidhi plan: LIC says, "LIC’s New Jeevan Nidhi Plan is conventional with-profits pension plan with a combination of protection and saving features." It provides death cover during the deferment period and annuity upon survival to the date of vesting. It comes with several benefits. One can also opt for an accident benefit sum assured for an amount up to the Basic Sum Assured subject to a minimum of Rs. 1,00,000 and maximum of Rs. 50 lakh.