Janmashtami 2019: If observed closely, there are a lot of similarities between investments and the tactics deployed by Lord Krishna in the battle between the Pandavas and Kauravas. 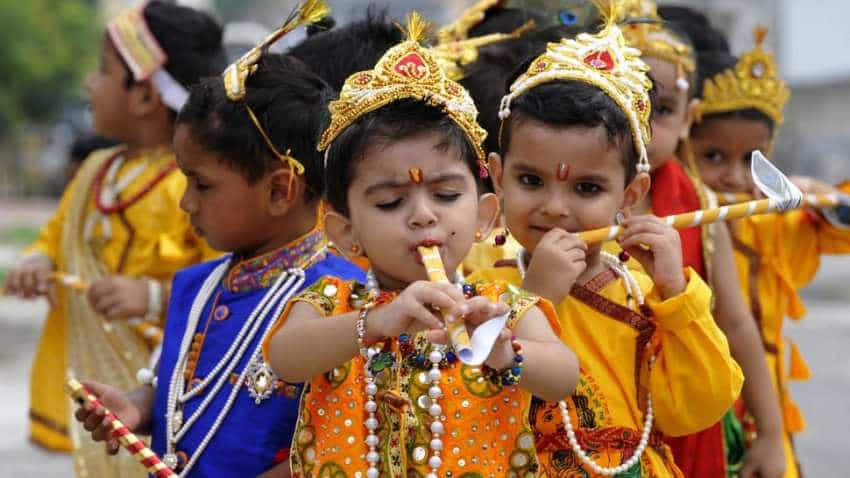 Janmashtami 2019: The most revered characters in Mahabharata is Lord Krishna. Incredibly tactful and highly enlightened, he played a decisive role in the battle of Kurukshetra, swinging the odds in favour of the righteous - the Pandavas. If observed closely, there are a lot of similarities between investments and the tactics deployed by Lord Krishna in the battle between the Pandavas and Kauravas. On the occasion of Janmashtami 2019, a festival celebrating Krishna’s birth, let us aim to adopt some of these tactics in managing money and meeting our personal investment goals.

Throughout the battle, Krishna did not allow the Pandavas to lose sight of their goals, which was to conquer Adharma, represented by the Kauravas. Time and again, he kept reminding them not to lose focus of their objective of establishing Dharma by winning the war at all costs. Similarly, it is essential to have a holistic picture of your financial goals and invest accordingly. A goal-based investment approach helps you choose the right instruments and ensures you have the required funds when needed.

Describing the goals that Lord Krishna had in boosting the Pandavas in the battle of Kurukshetra, Rahul Jain, Head, Personal Wealth Advisory, Edelweiss said, "If you intend to build a corpus for retirement, your portfolio needs equity exposure as they have the potential to deliver inflation-indexed returns in the long run. Also, you must remain invested for the long haul as equities are volatile in the short-term. Similarly, for building an emergency corpus, liquid fund is your best bet, which not only offers better returns than a bank savings account but also can be easily accessed, when needed."

Before the start of the Kurukshetra battle, Arjuna was overwhelmed by emotions, even refusing to fight against his loved ones, which included his grandsire (Bhishma) and guru (Dronacharya). To help him overcome this, Krishna recited several verses that are in the Bhagavad Gita.

"If Krishna hadn’t helped his friend then, Arjuna would have probably not participated in the war, thus spelling a major setback for the Pandavas. On similar grounds, to achieve personal financial freedom and address key goals, it is important to leave out emotions from investments. For example, during short-term volatility, it is essential to remain patient and not exit the market. On the contrary, it is equally vital to dodge the herd mentality and avoid bettering on risky instruments in the lure of high returns," said Rahul Jain.

An infamous incident of the Kurukshetra war was when Yudhisthira, the eldest Pandava, spoke half-truth of Ashwathama’s death that led Dronacharya to give up his arms and subsequently led to his downfall. It was Krishna who originally plotted this, as he knew the only way Drona could be conquered was when he would be unarmed, possible only upon hearing the news of the demise of his son Ashwathama.

"Investments call for a similar approach. For instance, it makes little sense to remain invested in instruments offering assured returns that are hardly inflation-beating, when saving for a long-term goal such as children’s higher education. Also, when you are nearing a goal, it is prudent to shift your investments from equities to debt to prevent a dip in the accumulated corpus due to market swings," said Jain.

While Arjuna and Karna were warriors of equal prowess, the latter possessed divine weapon of Lord Indra, which the former had no answer to. It was because of this that Krishna shielded Arjuna from Karna for quite some time. Only when Karna used this weapon on Ghatotkacha, Bhima’s son, which ensured complete safety of Arjuna, that Krishna brought him face-to-face with his biggest nemesis.

Jain said that investment strategies are no different. It is important to avoid undue risks and expose your portfolio to volatility. For example, while small caps have the potential to deliver superior returns as against large or mid-caps, they are riskier. You should invest in them only if you have the stomach to bear losses. Else, it is in your best interest to avoid them. Also, when you are set to accomplish a goal, capital protection rather than appreciation should be the aim.

As is evident, the strategy deployed by Krishna in the epic battle holds crucial lessons pertaining to investment. Following them can help you be in command of your finances and make sure you address each of your life's goals with impunity. At the same time, it enables you to build a legacy for the future.