Bank Strike in Jan 2020: Just ahead of Budget 2020 presentation, all government banks have announced they will go on 2-day nation-wide strike from January 31st. Effectively banks will be closed for 3 days. 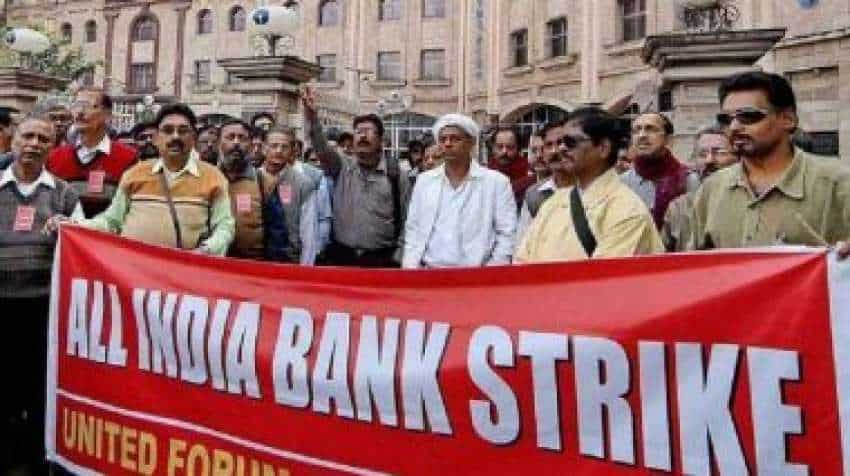 Bank Strike: SBI and other government banks have informed its customers in regard to the two-day bank strike from 31st January 2020. Photo: PTI
Written By: ZeeBiz WebTeam
Edited By: Harish Dugh
RELATED NEWS

Bank Strike in Jan 2020 latest news: Just ahead of the Budget 2020 presentation, all government banks including SBI (State Bank of India) have announced they will go on 2-day all-India strike from January 31st to February 1. Bank account holders should know, effectively, this means banks will be closed for 3 days as February 2 is a Sunday! They are going on this two-day strike demanding salary hike, which they have been demanding for the last two years. the two-day bank strike has been called by the United forum of Bank Unions (UFBU). UFBU is a confederation of nine bank unions that includes All India Bank Officers Confederation (AIBOC), All India Bank Employees Association (AIBEA) and National Organisations of Bank Workers. According to PTI reports, government banks decided to continue with their bank strike decision from 31st January to 1 February after the meeting of Labour Commissioner and AIBOC president Sunil Kumar failed to bring any outcome.

For information to the readers, the salary hike matter of the government bank employees has been in limbo since November 2017. Speaking on the bank strike H Venkatachalam, General Secretary, All India Bank Employees Association (AIBEA) said, "We have decided to continue with our plans in regard to bank strike after the Indian Bank Association (IBA) failed to clear its stand on our demand. In fact, we have been forced to go ahead with our bank strike plans from 31st January 2020 to 1st February 2020 as IBA has continued to showcase its stubborn attitude towards our salary hike plan."

The Stata Bank of India (SBI) and other government banks have informed customers in regard to the 2-day bank strike from 31st January 2020. They have advised their customers to maintain their bank account and have proper cash in their pocket as, during the two-day bank strike, there will be Sunday following on February 2nd. So, on three consecutive days, banking services will remain suspended at the bank branches and it may hamper the ATM cash availability as well. They have urged their customers to keep these things in mind while maintaining their bank account and other banking-related requirements.