As crude oil prices peaked at a three-year high, Zee Business Commodity Editor Mrituenjay Jha explained the road ahead and what would happen as the OPEC and non-OPEC members' three-day meeting has been called off without any constructive decision. 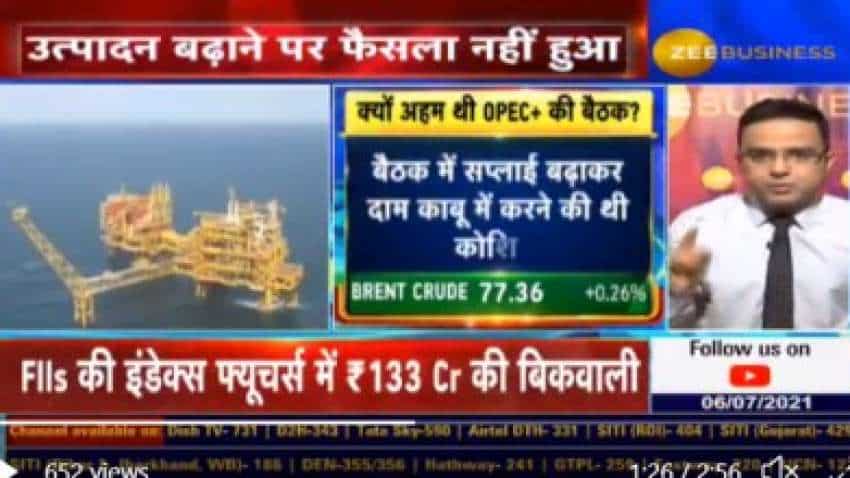 As crude oil prices peaked at a three-year high, Zee Business Commodity Editor Mrituenjay Jha explained the road ahead and what would happen as the OPEC and non-OPEC members' three-day meeting has been called off without any constructive decision.

OPEC+ nations on Monday called off talks on output levels, which means there has been no deal to boost the oil production had been agreed, as the United Arab Emirates (UAE) rejected a proposed eight-month extension to output curb.

Jha, explaining the OPEC meeting into three parts, said the meeting which began on Thursday was called off after UAE’s rejection of the proposed output curb, as it was expected that from August the output reduction would happen.

As the meeting got suspended with no new date and without any constructive decision, there won’t be a new production growth in crude oil, says the commodity editor.

At present, there has been a huge gap with respect to demand and supply of crude and due to which the prices have been skyrocketing. The US, which was once the leading producer, is also unable to meet the overall demand for crude across the world.

Jha says, the latest OPEC+ meeting was important for India too, as the country is reeling under huge commodity pressure as the petrol prices in many Indian cities have breached Rs 100 per litre mark.

He adds, the crude oil production increase, would somehow have sufficed the demand in India, and fuel prices in the country might have cooled down a bit.

OPEC+ nations were supposed to cut 20 lakh barrel crude oil production, however, since there hasn’t been any decision and consensus made in the recent meeting, only time will tell what happens next, the commodity editor says explaining the road ahead.

Oil prices are at the highest since 2018 and have already prompted concerns inflation could derail a global recovery from the pandemic.

The Organization of the Petroleum Exporting Countries and its allies, a group known as OPEC+, had agreed earlier on record output cuts in 2020 to cope with a COVID-induced price crash.