Indian rupee has been on a tumultuous ride since the beginning of the calendar 2021, witnessing significant volatility in the band of 72.4-76.0/USD. 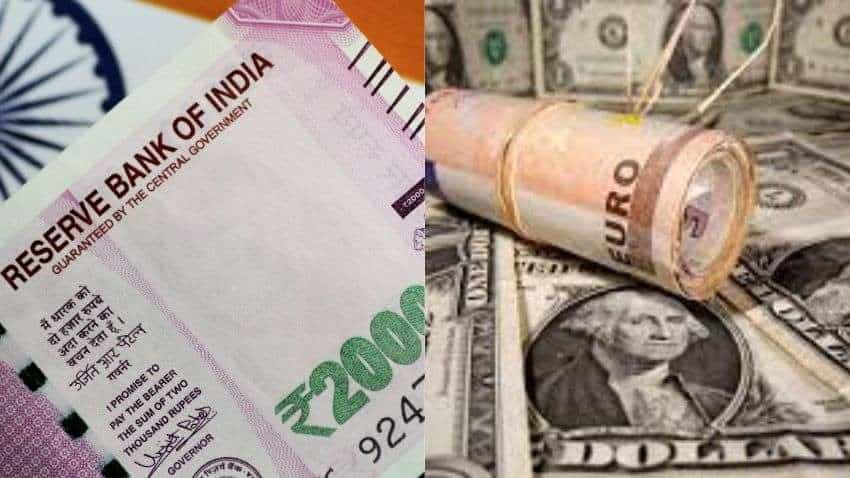 India’s inclusion in global bond indices is likely to happen next year. An event like this could create new source of foreign inflow, thereby altering the currency dynamics. Pic: Reuters

Indian rupee has been on a tumultuous ride since the beginning of the calendar 2021, witnessing significant volatility in the band of 72.4-76.0/USD. From maintaining an appreciating bias in the early months of 2021 amidst record high foreign inflows, the INR has been losing ground past couple of months and is likely to end the year as one of the laggards among the Asian market currencies, Acuite Ratings said.

After closing at a strongest post pandemic level of 72.61 in May-21, the rupee has seen a weakness since Sep-21. Although the rupee has depreciated only by 0.8% so far in Q3 FY22 against the USD as compared to a mild appreciation of 0.2% seen in Q2 FY22 due to reported dollar purchases by the central bank, there has been a sharp interim surge where the rupee almost touched 76.0/USD, which was the weakest level in nearly 2 years. The weakness in INR in Dec-21 has put it amongst the worst performers in Asian space along with JPY (Japanese Yen) and MYR (Malaysian Ringgit).

Clearly, a combination of global as well as domestic factors has led INR to depreciate. On the global front, continued strength in the US dollar amid a sharp hawkish tilt by the Federal Reserve primarily driven by inflationary pressures perceived to be more ‘permanent’ than earlier expected, has been one of the factors weighing on INR. In the recent FOMC meeting in Dec-21, Fed has not only announced its intent to accelerate the ongoing taper (by doubling the pace of monthly bond purchases from USD 15 bn per month to USD 30 bn per month), but more importantly, it now projects three round of rate hikes in 2022, up from just one projected in the Sep-21 policy review. 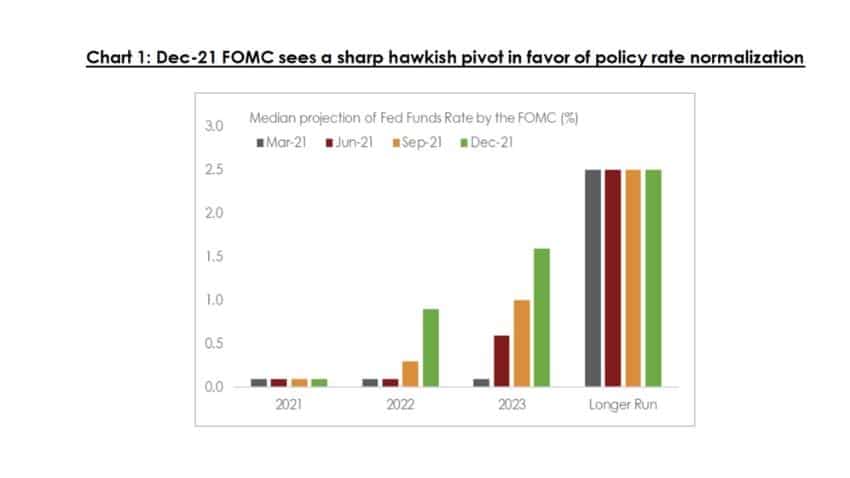 The projection of three rate hikes by the latest dot plot practically eliminates any major gap between end of taper and beginning of policy rate normalization as rate hikes can potentially now happen every quarter post the conclusion of the taper program in Mar-22. Going forward, we continue to believe in the strength of the dollar. Our optimism on USD from economic outperformance of the US economy (averaged over 2021 and 2022, the IMF expects US GDP to grow by 5.6%, thereby making it one of the strongest growth centers among DMs), as per the rating agency.

Domestically, with retail mobility exceeding pre pandemic levels and gradually rising vaccination cover (as of Dec 27th, India inoculated ~60% of its total population with at least one dose of Covid vaccine), pent-up demand is getting unlocked. This in addition to high global commodity prices, is keeping demand for imports at elevated levels, thereby weighing upon the merchandise trade deficit. India’s cumulative trade deficit in Apr-Nov’21 already stands higher at USD 116.9 bn as compared to the USD 113.4 bn in the corresponding pre pandemic period of 2019.

The surge in merchandise imports to a record high average level of USD 55 bn in the last three months could weigh on FY22 current account deficit. For now, we retain our FY22 current account deficit forecast at USD 38 bn compared to USD 24 bn surplus in FY21. However, we do note an emergence of upside risk on the back of elevated trade deficit prints in the last three months. Meanwhile, uncertainty on the spread of Omicron can be a wild card factor to watch out for.

With current account deficit facing risk of a higher expansion than anticipated, our projection of FY22 BoP surplus at USD 50 bn could in turn face some downward pressure. The recent hawkish narrative from key central banks in the developed economies along with uncertainty with respect to Omicron has resulted in USD 3.7 bn portfolio outflow from Indian financial markets in Dec-21 so far (till Dec 28). This happens to be largest portfolio outflow on monthly basis in the pandemic era beginning Apr-20. However, if the plan of roll out of LIC’s IPO stays on course, Q4 FY22 could see capital inflows thereby supporting INR to some extent. 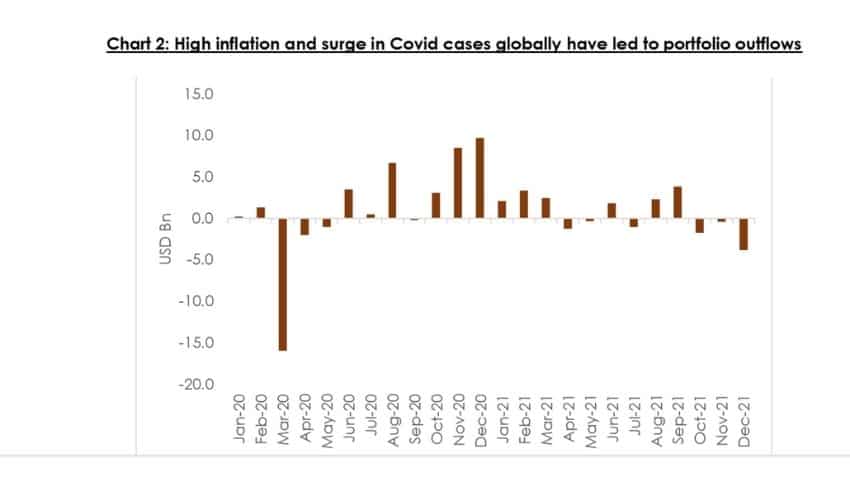 Going forward, we continue to expect INR to face steady depreciation pressures. We believe that there is a material likelihood that USD/INR pair will touch the level of 77 by Mar-22. Having said so, the intensity of adjustment is likely to be less severe vis-à-vis the 2013 ‘Taper Tantrum’ episode on account of relatively better domestic macros (especially expectations with respect to medium term growth and inflation) and strong FX Reserve Cover (~USD 636 bn currently that corresponds to about 13-14 months of import cover) which provides stronger ammunition to the central bank for providing support to INR, as and when required.

Additionally, the following factors could reduce the extent of weakness in INR and provide downside risk to USDINR forecast: Renewed COVID risks triggered by Omicron is likely to impart some downside pressure to global commodity prices. Monthly average price of India Crude Basket is 9.9% lower in Dec-21 from Nov-21. If sustained, this would help to lower the pressure on key oil importers like India.

India’s inclusion in global bond indices is likely to happen next year. An event like this could create new source of foreign inflow, thereby altering the currency dynamics.

Rupee vs Dollar today: INR appreciates 8 paise to 82.76 against $ on rising risk sentiment

Rupee Vs Dollar: Will rupee see further lows and where is it headed? Experts decode

Rupee vs Dollar: Indian currency trades in narrow range against $

Rupee vs Dollar: Indian currency falls 14 paise to close at 82.35 against $

India’s EV market likely to cross 1-crore sales mark per annum and add 5 crore jobs by 2030, as per Economic Survey