SIP Stock: Spencer’s Retail - Anil Singhvi points out 4 positives; KNOW why THIS is a multibagger – what investors should know 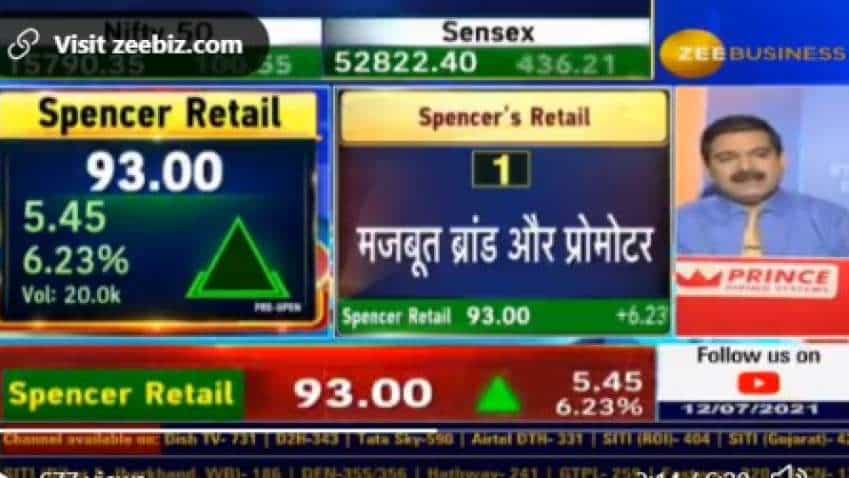 Celebrating 7 years, iBrandOx Founder says, ‘It is the end result that matters!’

Spencer’s Retail is RP Sanjiv Goenka group company, which has around 197 stores network in 41 cities, says Zee Business Research Analyst Ashish Chaturvedi says while explaining internals. This is the first company to introduce a hypermarket concept as well first to open a retail stores chain in India.

The retail chain acquired Nature’s Basket with Rs 300 crores in FY20, and the subsidiary has shown a good turnaround, as after many quarters the company has reported positive EBITDA, the research analyst said. He further said, there has been a spectacular growth in the non-food sector, and its margin will improve more going forward on the back of strong operating efficiency.

The research analyst points out the takeaways, why this stock should be in the portfolio, he says, promoters background is good, it is high growth business, company's size good, and valuations are strong too. It has a market capitalisation of Rs 789 crore and market cap/sales at 0.3 per cent, Chaturvedi says terming it as a multi-bagger stock.

Similarly, Singhvi points out that the company has a strong brand value, and its promoters are strong too. All the companies of RP Sanjiv Goenka group are doing quite well such as Saregama, FirstSource, Philips Carbon among others.

With respect to opening-up theme, the company has received good footfall, and has got quite a good response since the unlock process of the government amid covid crisis, says the managing editor adding further that the company launched six new stores net-net in the last one year, moreover, its non-food business has almost come to pre-covid levels, wherein margins are higher.

Singhvi says, Spencer’s Retail could drive a majority of the growth from the acquisition of Nature’s Basket. He sets a target of Rs 120, Rs 150, and Rs 200 per share as a short-, medium- and long-term perspectives respectively in the coming months.

Celebrating 7 years, iBrandOx Founder says, ‘It is the end result that matters!’