There is lot of action being noticed in chemical space from the last 2-3 days. Speaking on the reasons behind the same, Varun Dubey, Senior Research Analyst at Zee Business, said that a continuous increase in prices of chemical has been witnessed. 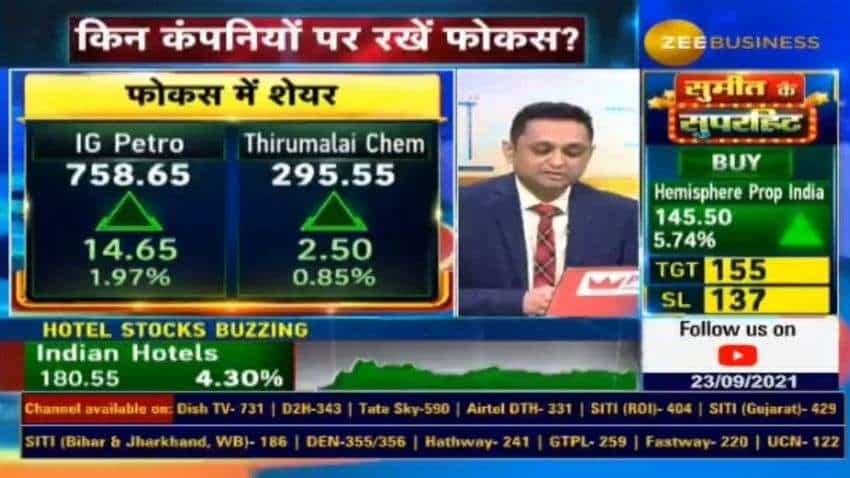 Hoping for a good appraisal? Three reasons why your salary this year won't increase by much

There is lot of action being noticed in chemical space from the last 2-3 days. Speaking on the reasons behind the same, Varun Dubey, Senior Research Analyst at Zee Business, said that a continuous increase in prices of chemical has been witnessed.

The research analyst said, in the last few days, this hike in prices has been very sharp and there are many reasons behind the same.

He said that as the economy is opening up, the commodity prices are also increasing and its impact can be seen in the chemical prices. An increase in overall demand is also making an impact, the analyst added.

He said that the cost of shipping has also increased because of the shortage of containers, which has further led to price hike of chemicals. So, there are multiple factors because of which the cost of different chemicals is rising.

The research analyst also listed out the stocks which needs to be in focus because of the chemical prices. Check the list here:

1. Gujarat Narmada Valley Fertilzers & Chemicals Ltd (GNFC): He said that the company deals in a chemical called Toluene diisocyanate (TDI) and the price of this chemical has been rising continuously. Around 5 percent growth has been observed on year on year (YoY) basis, while around 16 percent on month on month (MoM) basis. He further added that in last 20 days, around 20 percent of hike has been seen in the prices of acetic acid and GNFC has a market share of around 15 percent in acetic acid.

2. Ineos Styrolution and Supreme Petrochem Ltd: The analyst said to keep an eye on these stocks as well as the price of Acrylonitrile Butadiene Styrene (ABS) has been increased by around 15 percent on MoM basis, while on YoY basis, 60 percent hike has been seen.

3. IG Petrochemicals Ltd and Thirumalai Chemicals Ltd:  The analyst said that hike in price of a product in these companies has been observed. The prices have been increased by around 36 percent on MoM and around 150 percent on YoY basis.

4. Gujarat Alkalies & Chemicals Limited; DCM Ltd; Grasim Industries Ltd: The analyst asked to focus on these stocks as the cost of caustic soda has increased and in the last few days the price has risen by around 50 percent.

The research analyst concluded by saying that there are several chemical products whose prices have been increased in the last few days, especially in last one month and hence it is impacting the shares of the chemical companies.

Hoping for a good appraisal? Three reasons why your salary this year won't increase by much