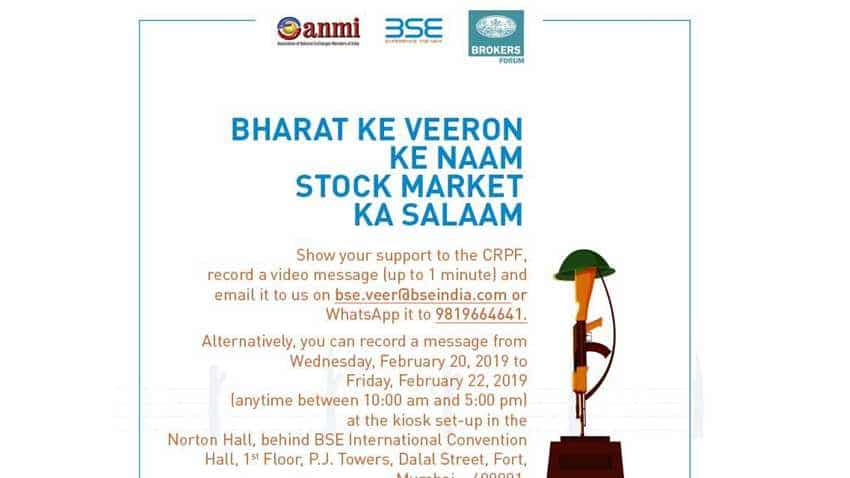 BSE has asked the public to record a short one minute message and email it on bse.veer@bseindia.com.

The Pulwama attack which led to the killing of 40 CRPF personnel in Jammu and Kashmir has brought the country together and help is coming in from all parts of India. While a number of celebrities have donated huge amounts for the families of martyrs, many other unique initiatives have also been launched. In one such step, the Bombay Stock Exchange (BSE) is organising 'Bharat Ke Veeron Ke Naam Stock Market Ka Salaam' initiative. As part of this initiative, you can also pay tribute to Pulwama martyrs.

BSE has asked the public to record a short one minute message and email it on bse.veer@bseindia.com. The video can also be sent on WhatsApp at 9819664641. It has also set up kiosk at Norton Hall. People can also record their video at the kiosk between February 20, 2019 and February 22, 2019.

"Show your support to the CRPF, record a video message (up to 1 minute) and email it us on bse.veer@bseindia.com or WhatsApp it on 9819664641. Alternatively, you can also record a message from Wednesday February 20, 2019 to February 22, 2019 (anytime between 10:00 am and 5:00 pm) at the kiosk set-up in Norton Hall, behind BSE Internatinal Convention Hall, 1st Floor, PJ Towers, Dalal Street, Fort, Mumbai," the message from BSE read.

All these soldiers were customers under defence salary package where it provides insurance of Rs 30 lakh to each of the defence personnel.

"It is extremely distressing and disturbing to witness the loss of lives of the soldiers who always stand for safety of our country. These initiatives by the bank is a small gesture towards the families who have faced irreparable loss," the bank's chairman Rajnish Kumar said.