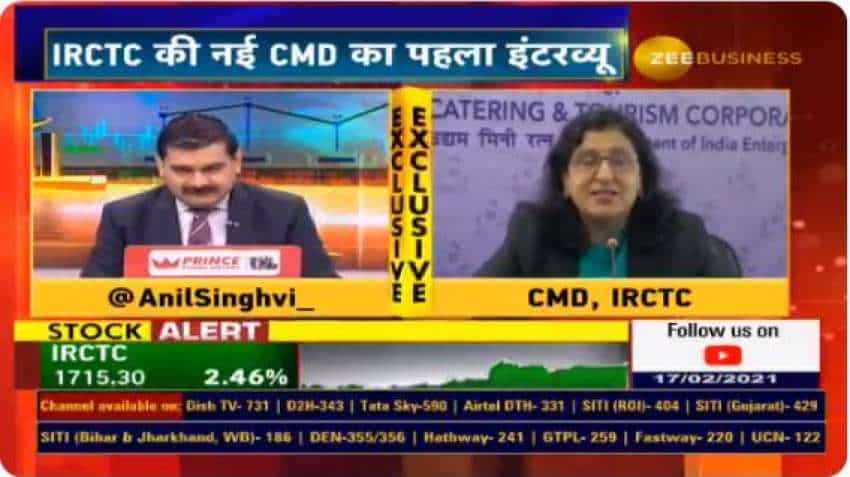 Hasija said that the IRCTC is still some distance from getting back to its full operations which have been severely impacted because of the Coronavirus Pandemic
Written By: ZeeBiz WebTeam
Edited By: Harish Dugh
RELATED NEWS

In today’s edition of News Par Views show, Zee Business Managing Editor Anil Singhvi spoke to Rajni Hasija, Chairman and Managing Director (CMD) of IRCTC, where she spoke about the quarterly results, business outlook, bus service ticketing and plans to run private trains. She took over as the CMD on 3 February 2021. (#NewsParViews)

IRCTC or Indian Railway Catering and Tourism Corporation is a public sector undertaking that provides ticketing, catering, and tourism services to the Indian Railways.

Hasija said that the IRCTC is still some distance from getting back to its full operations which have been severely impacted because of the Coronavirus Pandemic. She however said that the December quarter was better than the September quarter and much better from the June quarter.

She said that the COvid-19 pandemic had hit travel and tourism businesses, catering, and the overall hospitality segment.

Segment wise, the production in its ‘Rail Neer’ business is only at 17 per cent as against 80 per cent in the normal times, the CMD said. The operations are gradually getting better with trains resuming operations, she further said. She also said that there was a positive change in the ticketing segment where the company has seen an increase in the number of bookings. It is now at 83 per cent in comparison to 70-72 per cent. The share on non-AC segment has also grown, she said. Meanwhile, the catering business is also lagging the pre-covid times, though it is gradually getting better, she further said.

She said that she hoped that the full-scale operations could start soon, though there was no official intimation on this.

She said that the market size of bus service segment was Rs 15,000 cr. The online share is only 5 per cent she said pointing to the potential that is present for IRCTC.