Zomato now plans to introduce 'tamper-proof tapes' along with other measures, which it believes, can add an extra layer of safeguard against such recalcitrant behaviour. 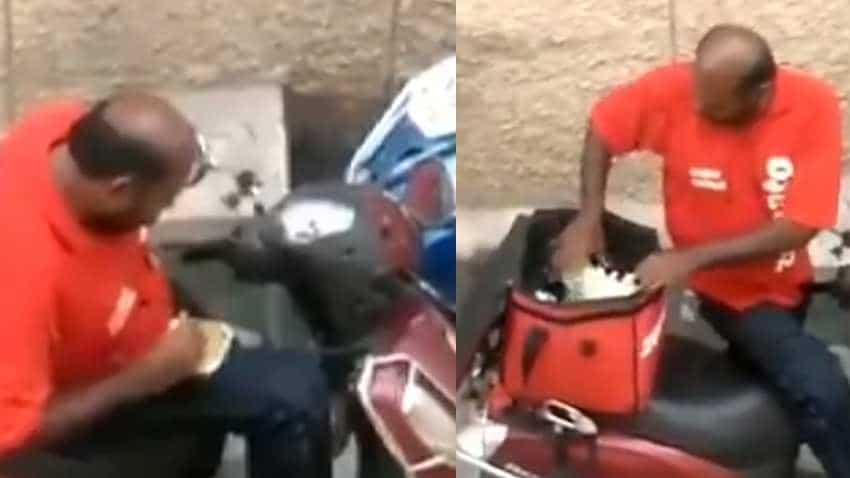 Zomato has removed the delivery man who was caught eating from the packet.
Written By: ZeeBiz WebTeam
RELATED NEWS

Life has surely, turned into a nightmare for this online food delivery giant since Tuesday night when a shocking video went viral. The clip, showing one of Zomato's delivery boys opening packets meant for customers and actually eating the food inside them, surfaced on the internet on various platforms. The company rushed to make amends and in a blog post, admitted that the incident highlights real possibility of tampering of food on the way to delivery from a restaurant. Zomato also indicated that it will take firm steps to bring incidents like this to a full stop by introducing new precautionary measures against it. Zomato now plans to introduce 'tamper-proof tapes' along with other measures, which it believes, can add an extra layer of safeguard against such recalcitrant behaviour.

"We take this very seriously and will soon introduce tamper-proof tapes, and other precautionary measures to ensure we add an extra layer of safeguard against such behaviour. Additionally, we will educate our delivery fleet of over 1.5 lakh partners to highlight or escalate any such deviations to us," Zomato said.

Zomato has also asked customers - whom it calls the custodians of its platform - to highlight the smallest of anomalies and bring it to their notice. The company added that it maintains a zero tolerance policy for tampering with the food. "This particular incident, while unfortunate, only makes our commitment to fleet training, scheduling and process even stronger. We stand behind our extensive fleet who do the right thing across many hours of the day," the company post said.

In the video, the delivery man was seen eating from one pack and then, to hide the evidence, leveling the food so it appears untouched. He then sealed the pack and does the same with two other parcels. The food delivery platform apologised to its customers as soon as the video went viral and said that the delivery partner - as the company calls them - was removed.

This is what happens when you use coupon codes all the time. Watch till end. pic.twitter.com/KG5y9wUoNk

"We take these kinds of reports extremely seriously and upon thorough investigation, we've found that the video was shot in Madurai. The person in the video happened to be a delivery partner on our fleet. We have spoken to him at length - and while we understand that this was a human error in judgment, we have taken him off our platform." Zomato said in its blog.

However, it maintained that company's delivery partners are its face and the heart of its success in growing to become the largest food delivery platform in the country. It said that it is due to these delivery partners that Zomato translates to a high quality food experience and thanked them for their strong support.