ZEE Jaipur Literature Festival: You can enjoy a sumptuous feast of ideas at Diggi Palace from Jan 24

For book lovers, ZEE Jaipur Literature Festival is a very special occasion that they really wait for. If you also belong to this league, don't lose this opportunity as the 12th edition of the festival will be held from January 24th to January 28th. 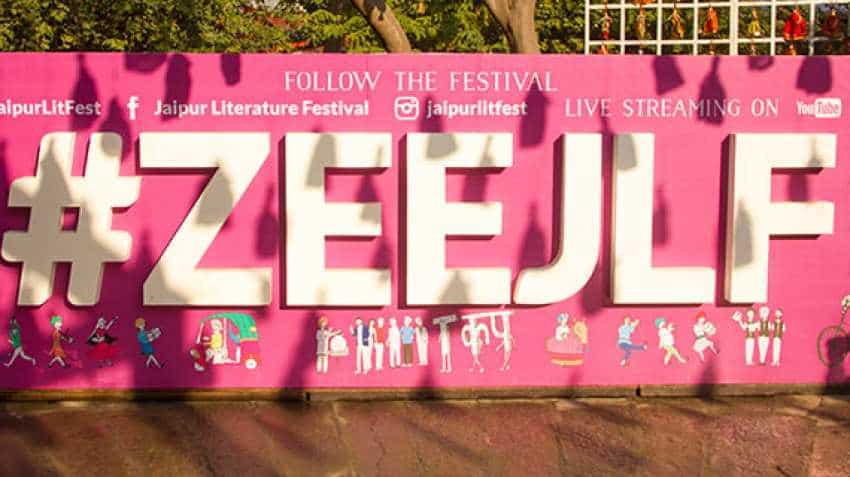 For book lovers, ZEE Jaipur Literature Festival is a very special occasion that they really wait for. Image source: hoteldiggipalace.com

For book lovers, ZEE Jaipur Literature Festival is a very special occasion that they really wait for. If you also belong to this league, don't lose this opportunity as the 12th edition of the festival will be held from January 24th to January 28th at the Pink City's Diggi Palace. Loaded in both style and substance, the congregation of top writers of fiction from across the world will further enrich your memories of listening to these hermits of the goddess of learning.

The chance is knocking at your door to leaf through a collection of fiction, novels old and new, read, unread and reread, and wait for the unfolding of the big, bold and beautiful spectacle of fiction-writing at the Zee Jaipur Literature Festival 2019. Just to let you know about a few great books and their authors, here is a brief intro of a few.

In The Underground Railroad, named after Colson Whitehead’s heart-wrenching tour de force, chronicling a young slave's adventures as she makes a desperate bid for freedom in the antebellum South, which won the Pulitzer in 2016, the author makes his debut appearance in South Asia, in a conversation with novelist Kanishk Tharoor.

In Nigerian writer and poet Ben Okri's most significant novel, the Man Booker-winning The Famished Road, a young woman is arrested for speaking four simple words – ‘Who is the Prisoner?’ This question resonates throughout the novel and the answer is implicit in the revelation at the heart of the story.

Examining the actual process of producing a great and memorable novel in The Writer at Work, are five novelists from around the world - Ahdaf Soueif, Álvaro Enrigue, Colson Whitehead, Hari Kunzru and Yann Martel – belonging across Mexico to Egypt, talking about their search for inspiration with Chandrahas Choudhury.

In The New York Novel, the idea of New York, the ultimate city of the displaced, where emigrants from so many different countries have converged through history, and its role as a shaper of writing destinies are discussed with writers from wildly different and much-hyphenated backgrounds — Californian-Zimbabwe, North London-Kashmiri and Illinois-Bangladeshi — NoViolet Bulawayo, Tania James and Tanwi Nandini Islam are in conversation with novelist Hari Kunzru.

Jeffrey Archer, best-selling novelist, master of the twist-in-the-tale, is the only author ever to have been number one in fiction (19 times), short stories (four times) and non-fiction (The Prison Diaries). In the session ‘Before and After Pi’, Man Booker-winning Yann Martel, whose international bestseller Life of Pi scaled unbelievable heights, both as a novel and as a film, talks about his writing and life before and after the life-changing success of Pi, with novelist Jerry Pinto.

Three writers from countries violently divided by race, religion, and politics, Yasmine El Rashidi from Egypt, Sebastian Barry from Ireland and Anuk Arudpragasam from Sri Lanka, discuss what happens in A House Divided: Of Fiction and Civil Wars.

Markus Zusak, the masterful storyteller who gave us The Book Thief, speaks of his much-anticipated new book, Bridge of Clay, about a boy in search of a miracle which is ‘a deeply moving study of the bonds and breaks of the family’.

In conversation with Rana Dasgupta in the session In Search of Miracle, Zusak tells the story behind his phenomenally successful writing.

Described as the ‘greatest literary show on Earth’, the festival is a sumptuous feast of ideas where nearly 2000 speakers have been hosted in the past decade. It is also privileged to have welcomed over a million book lovers from across India and the globe.

Notably, the festival also takes pride in retaining its core values to serve as a democratic, non-aligned platform offering free and fair access.

"Nari Shakti" Is Oxford Dictionary's Hindi Word Of The Year 2018