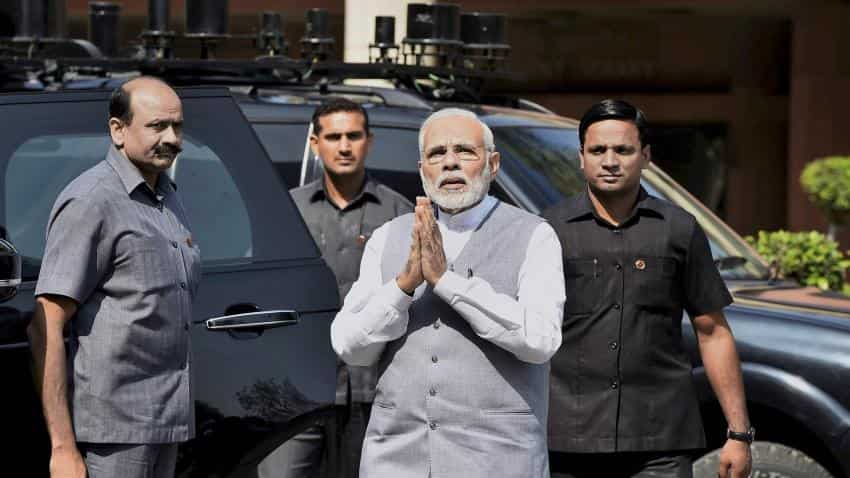 The Prime Minister tweeted, "Best of luck to all my young friends appearing for the CBSE class XII and class X examinations! Write these exams with a smile and lots of confidence." Image source: PTI
Written By: ZeeBiz WebTeam
RELATED NEWS

The Prime Minister tweeted, "Best of luck to all my young friends appearing for the CBSE class XII and class X examinations! Write these exams with a smile and lots of confidence."

LS adjourned amid protests over PNB scam, other issues

The Lok Sabha was adjourned till noon following vociferous protests by Opposition members over the Punjab National Bank fraud and other issues while those from NDA ally TDP continued to raise their demand for a special package to Andhra Pradesh.

Soon after Speaker Sumitra Mahajan made obituary references, members from the Congress, TRS and other parties as well as from the TDP trooped into the Well raising various issues. This was the first day the House met after the recess of the Budget session.

Before the start of proceedings, BJP members were seen clapping when Prime Minister Narendra Modi walked into the House. With folded hands, Modi greeted the members as well as those in the Opposition benches.
As the BJP and its allies captured power in the three North Eastern states, many of the saffron party MPs were seen wearing Assamese 'gamosa'.

As the protests continued, Mahajan adjourned the proceedings till noon.

The Rajya Sabha also witnessed repeated adjournments of proceedings in the morning session after opposition parties created a ruckus over the PNB scam and constitution of the Cauvery Water Management Board.

Slogan shouting from the Well resulted in proceedings being adjourned first for 10 minutes and then till 1400 hours, which resulted in the Question Hour not being taken up.

While the TMC led the charge against India's biggest bank fraud, Tamil parties - the AIADMK and the DMK came together to demand implementation of the court order on constitution of Caurvey Water Management Board.

The TDP and a Congress member demanded implementation of the promise to give special status to Andhra Pradesh after Telengana was carved out of it.

AIADMK, DMK, TMC, TDP members and KVP Ramachandra Rao of Congress rushed into the well of the House, raising slogans on various issues.

Chairman M Venkaiah Naidu first adjourned the proceedings for 10 minutes and then till 1400 hours when similar scenes were repeated on reassembly despite his assurance to members that discussions on issues raised by members would be allowed under appropriate rules.

He said no posters should be displayed and warned of action against violators. "Members seem determined to disrupt," he said before adjourning proceedings till 2 pm.