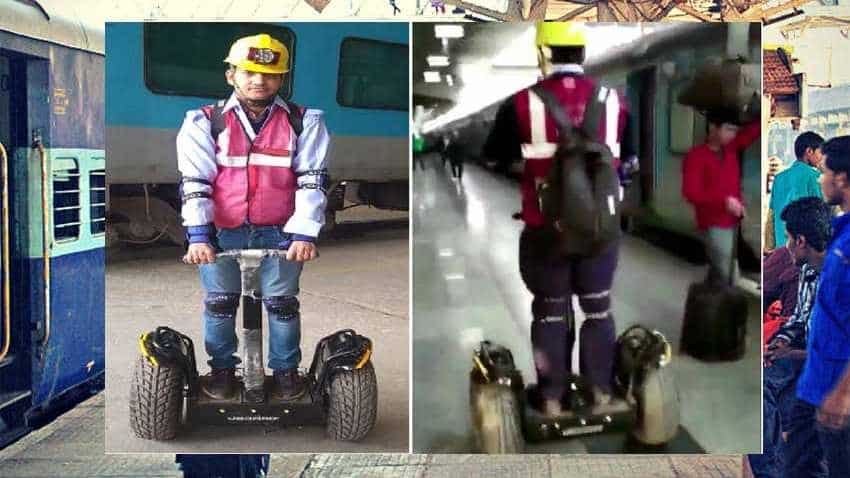 It is expected that with ‘Rapid C&W’ at platforms will help in improving punctuality of trains; owing to prompt attention passing through/departing trains.

Indian Railways has undergone a massive makeover in the last few years. Starting from the redevelopment of stations to trains with world-class facilities, the railways has been doing its bit to put things in sync. Now, the public transporter is testing hoverboards at the New Delhi Railway Station to help its Carriage & Wagon (C&W) staff faster and its train punctual. You may worry how the use of hoverboards can make a train punctual?

The railway's C&W staffs deployed at the stations has the responsibility of attending to various emergent requirements pertaining to various mechanical defects in passing through/departing trains. Besides, they have to also attend alarm chain pulling (ACP) cases promptly to minimise punctuality loss to trains.

"Handing over of brake power certificate (BPC) duly signed by the Guard and the Driver to both of them while traversing the entire length of the train of 550 metres (approx.) is another time-consuming process. There have also been cases of passengers falling down from a moving train and getting entangled with the coach parts are also attended by on-duty C&W staff at platforms. All such situations demand a high level of mobility whereas as on date same is attended by C&W staff by walking on foot, which is again a time-consuming process," said the railways.

To improve mobility of staff working at New Delhi RlyStn a concept of 'Rapid C&W' has been evolved by providing Hover Board to ride on & attending situations for maintaining punctuality as well as redressal of certain complaints.@RailMinIndia pic.twitter.com/VmNkPR08EA

The BPC is a document which certifies that brakes are working properly. Considering all these, a concept of ‘Rapid C&W’ has been evolved by the rolling stock department of the Nothern Railway.

To mitigate the time consumed in these processes, the NR has provided the on-duty C&W staff with a hoverboard to ride on and attend to above situations expeditiously.

It added that the use of a hoverboard has reduced the time taken while traversing the entire length of the train to less than a minute from three-minutes earlier.

Following are the broad specification of the hover board:

It said that the ‘Rapid C&W’ staff is being deployed after rigorous training to manoeuvre the hoverboard efficiently and safely on platforms and on level track paths at the end of the platform. It has also been planned to provide the users ‘CPR Training’ & ‘First Aid Training’ through trained hospital experts for quick assistance to travelling passengers at stations, it said.

It is expected that with ‘Rapid C&W’ at platforms will help in improving punctuality of trains; owing to prompt attention passing through/departing trains and the same would also help in speedy redressal of related passenger complaints.