Jet employees hope that the government will pay heed to their cries and protect their jobs in the grounded airline. 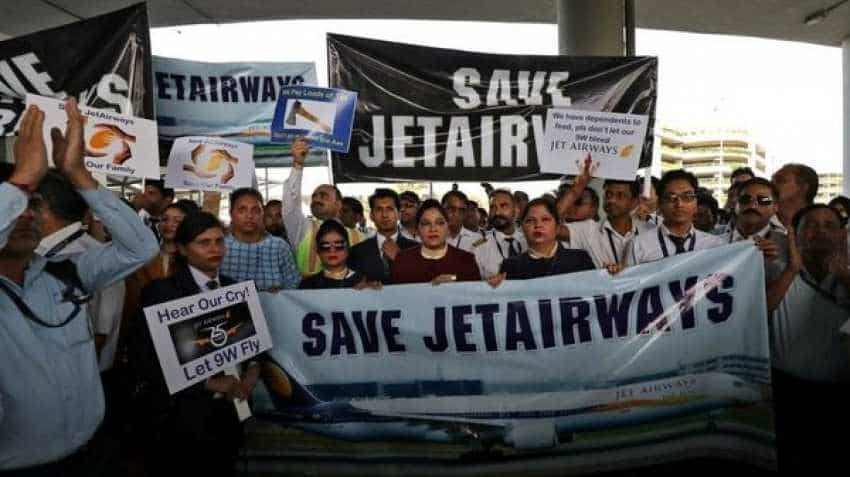 The staff strength has dropped to half in a span of over one month. Photo: Reuters

Jet Airways employees are staring at job losses with increasing certainty. This follows the grounding of the airline on April 17 2019. These employees are now knocking on the doors of the government in the hope that it will take adequate steps to revive the airline. To make themselves heard, the staff of the airline undertook a march in front of Rajiv Gandhi Bhawan that houses the Civil Aviation Ministry, on Tuesday.

After suffering severely from liquidity crisis, Jet Airways had to take the call of suspending all its operation on April 17, which left almost 22,000 employees stuck at home with nothing to do. Considering the worsening health of the airline, several Jet Airways employees, especially engineers and pilots, called it quits and left the carrier.

A source in Jet told IANS that the staff strength has dropped to half in a span of over one month.

With the General Election 2019 results around the corner, the employees of Jet Airways wish for an outstretched hand from Centre to help them out of the crisis. One Jet Airways employee from the airline's engineering department said that they will try to meet with the Aviation Secretary Pradeep Singh Kharola and come up with something that the government can do for the benefit of the employees.

Another Jet Airways personal added that there has been a notable amount of delay and the SBI-led lenders should accelerate the stake sale procedures.

On one hand while the investors were scrutinizing the investment proposals, on the other side the top airline executives including CEO, CFO and Company Secretary submitted their resignations citing personal reasons. Joining them were whole-time director Gaurang Shetty as well as on board Etihad nominee, Robin Kamark, who resigned on May 16.

Holding 24 per cent of the stake in the grounded airline, Etihad Airways is the only remaining bidder for stakes in Jet Airways.

Etihad Airways is offering to invest just Rs 1,700 crore compared to the requirement of Rs 15,000 crore. Further, Etihad Airways has put the responsibility of finding buyers on the lenders. The Gulf airline also states that it wishes to be exempted from given an open offer in case its stakes in Jet Airways beyond 26 per cent.