The RBI Governor said that in the last few months we have reduced the repo rate by 110 basis points, and today also it has been reduced by 25 basis points. 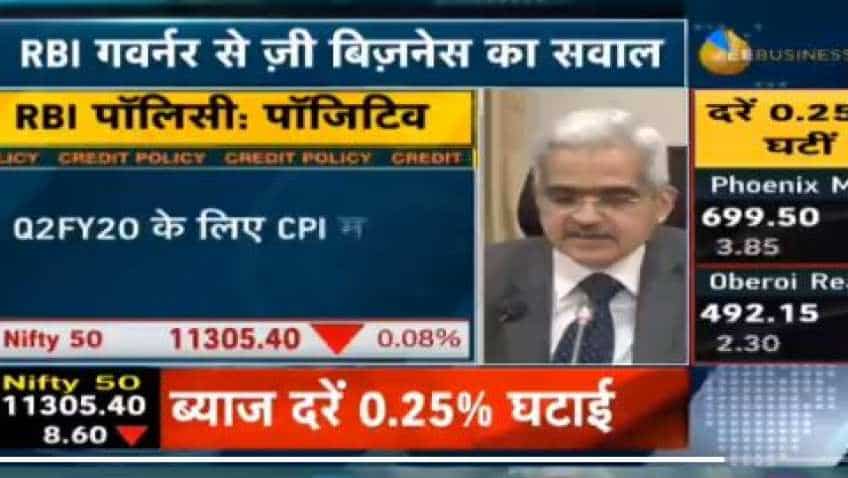 The RBI Governor was speaking to the media post the meeting of the Monetary Policy Committee (MPC). Image source: Twitter/Zee Business

The Reserve Bank Of India (RBI) today reduced its key lending rates to boost consumption and reverse the slowdown that has affected India's economic growth. Governor Shaktikanta Das expressed confidence that the impact of RBI decision to cut repo rate will be seen in the coming days. During the press conference, Swati Khandelwal, Executive Editor, Zee Business, questioned the RBI Governor that you reduced interest by 0.25 per cent, while the market expectation was that it would be reduced by 0.40 per cent, what was the reason that you did not think of reducing it by 40 bps.

He further said that we also need to se that in the last few months the government has taken big economic decisions in three installments. Of these, Corporate tax cut has been a major step, and because of this, RBI has decided to reduce interest rate by 0.25 per cent or 25 basis points.

The RBI Governor was speaking to the media post the meeting of the Monetary Policy Committee (MPC), whereby the panel decided to reduce repo rate by 25 basis points to 5.15 per cent.

The MPC also revised the country's growth forecast to 6.1 per cent for the financial year 2019-20.

RBI to go for 35 basis points hike in rates at next week's monetary policy meeting? What Bofa Securities report said