Rajiv Kumar, Vice Chairman, NITI Aayog, in an exclusive interview with Zee Business, talks about market and reasons why foreign institutional investors (FIIs) are not looking towards India. 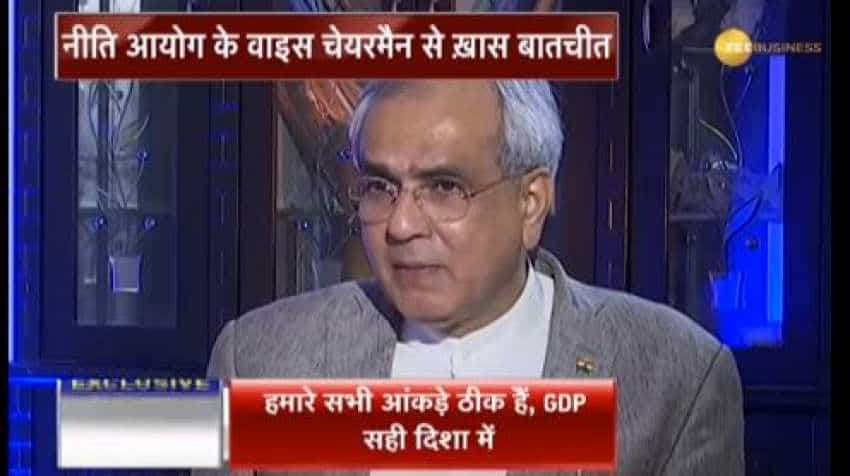 Rajiv Kumar said the market is like a horse, if you sit on it, you will feel good, but it may hit you if you start following it. Image source: Zee Business
Written By: ZeeBiz WebTeam
RELATED NEWS

Rajiv Kumar, Vice Chairman, NITI Aayog, in an exclusive interview with Swati Khandelwal, Zee Business, talks about market and reasons why foreign institutional investors (FIIs) are not looking towards India. Here are the edited excerpts:

Q: There has been a severe drop in the market in the past two months despite economic numbers being OK. What can be the  reason for this fall in the market?
A: First, I would ask you to not link the market conditions with the economic conditions of the country. The market has its own style and momentum. It is a place where institutional and foreign investors look at their personal gains and losses. Undoubtedly, they are connected to the macro fundamentals to some extent but they are also supposed to look on several other things at the same time, like a recent rumour about bond default by a company led to a fall of around 250 points but the news was not correct.

The market is like a horse, if you sit on it, you will feel good, but it may hit you if you start following it. That's why one must not follow the market and let it work in the way it wants but don't forget to have an eye on it.

As you said that almost everything is fine including the way our economy is going ahead. In fact, the GDP growth for the second quarter is likely to be between 7.5 to 7.8 per cent and the inflation stands around 3 per cent even when the MSP has been increased, fuel prices are high. Our reserves stand around $400 billion and we have an import cover for the next nine months.

Q: Then what is stopping foreign institutional investors (FII) from investing in India?
A: America and the prevalent special situation in the country is the main reason for this. The fiscal push adopted by them is different from other economies and it is also helping in strengthening the dollar. Secondly, their economy is growing at a time when they are fully employed. Besides, interest rate hike by the Fed has an impact on the emerging economies.

Q: Do you think that RBI can play an important role by intervening and making certain changes in the interest rate?
A: You can't counter Fed's interest rate hike by increasing rates in your country as you are not strong enough to handle it. Such an action will turn up to be like a proverbial saying "where is King Bhoj, where is Gangu the oil-presser" (Kaha Raja Bhoj Aur Kaha Gangu Teli)" and we must not go that way.

I feel RBI should focus on the liquidity issue and try to eliminate it as the prevalent deficit in the market is creating an anxiety and bond yields are on a rise. The rise in bond yields can have its impact on interest rates, which raises questions on the market conditions. Besides, RBI should also design a calendar of increase in liquidity at its end and change its stance.
The other thing is that our economy and investors need a support at this point of time and the support should be in such a way that they do not think that the economy is likely to be contracted after some time. If there is a signal that we want to stop the increasing demand it may stop new investments in the market.

Q: Fuel prices have been reduced but it is said that the reduction of Re 1 leads to a revenue loss of about Rs 14,000 crore to the nation. Can you tell the kind of effect this reduction will have on CAD?
A: The first thing is that the figure quoted by you is scary because we have just 6 months in hand and this means the reduction of Re 1 will lead to a loss of around Rs 7000 crore. This is a big thing and the central government will have to face a burden of around Rs 17,000 crore and I feel that we will be able to suffice the losses through disinvestment as well as non-tax revenues.