War box office collection day 5: There is no stopping Hrithik Roshan and Tiger Shroff starrer War! The film which released on Gandhi Jayanti has taken full advantage of the extended weekend, minting a whopping Rs 165 crore in the first five days. 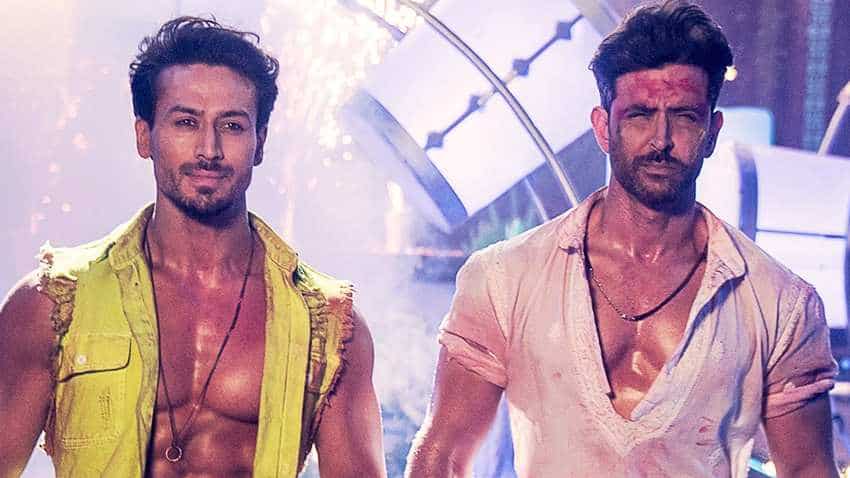 War had an outstanding Sunday where it earned Rs 36 crore and is showing signs of becoming the biggest film of 2019 so far. Source - YRF.
Written By: ZeeBiz WebTeam
Edited By: Harish Dugh
RELATED NEWS

War box office collection day 5: There is no stopping Hrithik Roshan and Tiger Shroff starrer War! The film which released on Gandhi Jayanti has taken full advantage of the extended weekend, minting a whopping Rs 165 crore in the first five days. War had an outstanding Sunday where it earned Rs 36 crore and is showing signs of becoming the biggest film of 2019 so far. The official fifth day collection is yet to be out but film trade analyst, critic and influencer Sumit Kadel believes that it is expected to be around the mentioned mark.

"#WAR Sunday- ₹ 36 cr nett approx.  First 5 days Weekend total stands HUGE ₹ 165 cr," he tweeted. The film is unlikely to slow down any time soon as it has another massive opportunity in the form of Dussehra 2019 which falls on Tuesday. The holiday should further boost the box office collections of War, allowing it to continue the momentum.

Interestingly, Kadel had predicted Rs 160 crore extended weekend for War when the trailer of the film was released. He recently retweeted an old tweet where he had made the claim. "#WarTrailer created tremendous buzz among trade and audience. Curiosity for the film has been multiplied. Lifetime collection depends on the merits & quality but i am assure of one thing that #WAR 5 days weekend would not be less than ₹ 160-170 crs nett," the tweet read.

The Hrithik Roshan and Tiger Shroff action-thriller does not face any significant competition at the ticket windows till Diwali, giving it a chance to beat Kabir Singh and Uri: The Surgical Strike and emerge as the biggest blockbuster of the year. Diwali will mark the release of Akshay Kumar's Housefull 4 which is expected to be another record shattering film.

To celebrate its record-breaking opening on October 2, the makers of War had organised a success bash at the Yash Raj Studios in Mumbai, two days after the film's release. Hrithik and Tiger were accompanied by their co-star Vaani Kapoor and director Siddharth Anand in the event. The film has also got positive reviews from critics as well as celebrities.

"When you watch a film with the excitement of a kid in a candy (read that as dandy) store you know you have a winner!! A massive winner!! #WAR is a popcorn party at the movies! Testosterone overdrive and beefcake brilliance makes this viewing a pure pleasure! Let’s take a breath and celebrate the magnitude of HERO that @hrithikroshan possesses ! He is born to walk in slow motion in ultra chic sunglasses! You can’t help but man crush on him and be wide eyed through the film! He is the embodiment of superstardom!! Just FANtastic @tigerjackieshroff is just AMAZING! Matching Hrithik step by step with assured energy and deep sincerity ! He has decades of superstardom in him! This was a brave choice and he emerges and how!!! What a fantastically produced film!! My alma mater @yrf paves the way for the benchmark of new age action on celluloid!!! Career best and deft direction by #sidharthanand who pulls all stop and executes a WHAM of a WAR!!! Go jump into this adrenaline rush!! Bhayankar Business Alert!!!! (sic)," Karan Johar wrote.