Speaking at the inaugural function of the Vibrant Gujarat Global Summit 2019 here, he said India was now one of the most open countries for FDI with over 90 per cent approvals put on the automatic route. 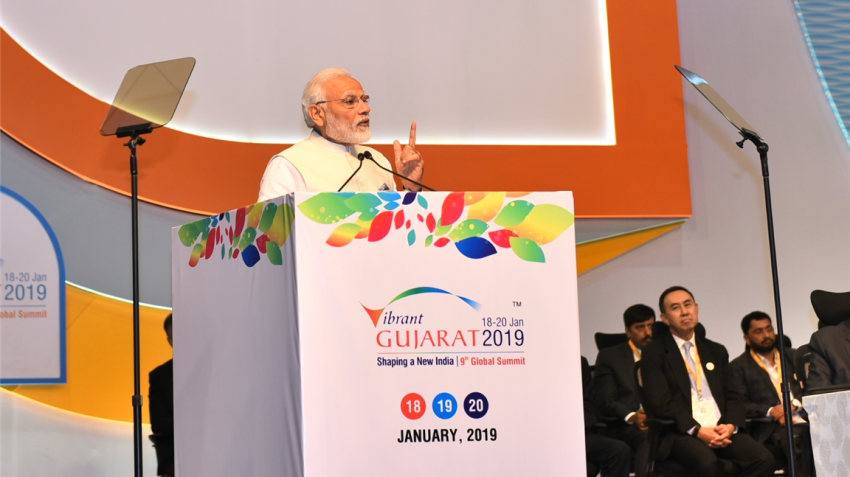 Modi said his government had removed the barriers which were preventing India from achieving its full potential and now it was ready for business like never before. Image source: IANS

Gandhinagar, Jan 18 (IANS) Prime Minister Narendra Modi on Friday said that his government had made doing business in India easier, cheaper, faster and smarter with his term accounting for almost 45 per cent of the Foreign Direct Investment (FDI) that the country received in the last 18 years.

Speaking at the inaugural function of the Vibrant Gujarat Global Summit 2019 here, he said India was now one of the most open countries for FDI with over 90 per cent approvals put on the automatic route.

"In the last four years, we have received FDI worth $263 billion. This is 45 per cent of the FDI received in last 18 years," Modi told the gathering.

He said India was among the top 10 FDI destinations.

Modi, who is on a three-day visit to his home state to throw open his pet biennial Vibrant Gujarat Global Summit, said the India of today was a land of "immense opportunities" being the only place that offered democracy, demography and demand.

"Fifty cities in India are ready to build metro rail systems. We have to build 50 million houses. The requirement of road, rail and waterways is enormous. We want world class technologies to achieve our goal in a faster and cleaner way. India is thus, a land of immense opportunities." he said.

The Prime Minister said the challenge for India, as in most emerging economies, was to grow horizontally as well as vertically to ensure that the benefits of development spread to regions and communities that have lagged behind while also meeting enhanced expectations in terms of quality of life, quality of services and quality of infrastructure.

"We are well aware that our achievements, here in India, will directly impact one sixth of humanity."

Modi said his government had removed the barriers which were preventing India from achieving its full potential and now it was ready for business like never before.

The government has made doing business easier. cheaper, faster and smarter, he said.

"In the last four years, we have jumped 65 places in the global ranking of World Bank`s Doing Business Report. From 142 in 2014 to 77 now, but we are still not satisfied. I have asked my team to work harder so that India is in the top 50 next year.

"We have also made doing business cheaper. The historic implementation of Goods and Services Tax and other measures of simplification and consolidation of taxes have reduced transaction costs and made processes efficient.

"We have also made doing business faster through digital processes, online transactions and single point inter-faces," he said.

He said his government had made doing business smarter by insisting on IT based transactions and digital payments including direct transfer of government benefits.

Modi added that he understood that being a young nation, India needs to create job opportunities and better infrastructure, which are both linked with investments.

"Therefore, in recent years, there has been unprecedented focus on manufacturing and infrastructure," he said.

Listing the achievements of his government, he said for the first time, India had become a net exporter of electricity, had installed transmission lines at an unprecedented pace and had doubled the speed of road construction with rural road connectivity now at 90 per cent.

Modi had conceptualised the summit as Gujarat Chief Minister in 2003 to position the state as an ideal investment destination after the 2002 riots.