India's Defence Minister Nirmala Sitharaman and External Affairs Minister Sushma Swaraj and Secretary of State Mike Pompeo and then-Defence Secretary James Mattis of the US met in New Delhi for the first 2+2 meeting to enhance strategic cooperation between their countries. COMCASA was signed at the meeting. 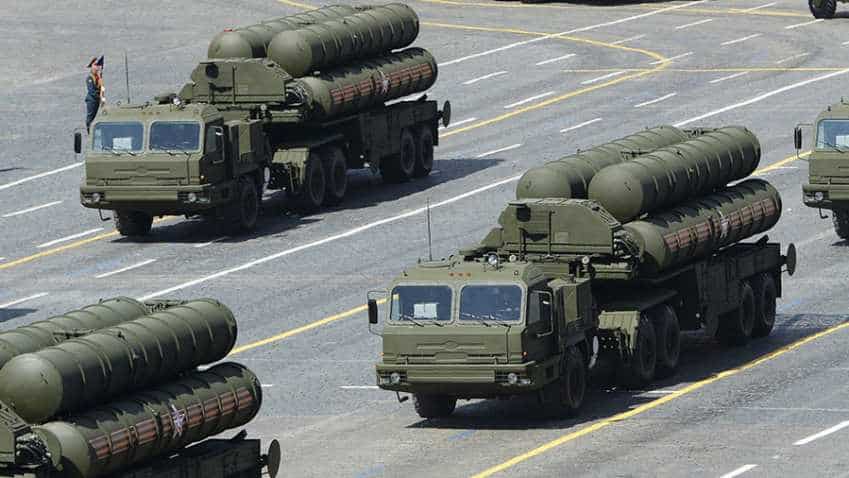 China's challenge in the Indo-Pacific region and the US response to it dominated the hearings. Image source: Reuters
Written By: IANS
RELATED NEWS

The US is working with India to offer an alternative to the Russian S-400 Triumf missile defence system, according to Assistant Defence Secretary Randall Schriver, but he left open the possibility that Washington may not punish New Delhi over the $5.4 billion Moscow deal. "I think it would be an unfortunate decision if they chose to pursue that", he told the House of Representatives Armed Forces Committee on Wednesday in Washington during a hearing on US Military Activities in Indo-Pacific region. "We are very keen to see them make an alternative choice" and "we're working with them to provide potential alternatives", he said.

The commander of the Indo-Pacific Command, Admiral Philip Davidson, also made a pitch for India to buy US defence equipment. "I continue to make the point with them that our interoperability and compatibility going forward will be advantaged with the purchase of US systems", he said.

In a reference to the Countering America's Adversaries Through Sanctions Act (CAATSA), Schriver pointed out that there was a punitive US legislation "hanging over" the S-400 deal with Russia.

But he added, "We want to work through it because India is an emerging partnership for us".

"The legislation", Schriver said "is not designed to be an impediment in the growing strategic partnership we have with India. It's designed for consequence to Russia."

The 2017 law adopted with bi-partisan support as a response to Moscow's involvement in US elections seeks to impose sanctions on buyers of Russian defence equipment.

Schriver was answering a question form Democratic Representative Seth Moulton, who asked how India's purchase of S-400 and the lease of Russian nuclear submarines would impact India-US relations.

Schriver told him that the purchase of S-400 has "not gone to contract or completed", but he did not touch on the $3 billion lease agreement India signed earlier this month for a Russian Akula class nuclear submarine.

Possible US alternatives to the Russian S-400 are the Lockheed Martin's THAAD system (short for Terminal High Altitude Area Defense) and Raytheon's Patriot system, although the three vary in capabilities and costs.

China's challenge in the Indo-Pacific region and the US response to it dominated the hearings. "The reemergence of great power competition - if not carefully managed - poses a challenge to the free and open order in the Indo-Pacific that underpins our continued peace and prosperity" Schriver said.

Davidson said that "the vision of a-free and open Indo-Pacific" was the unifying factor for India, Japan, Australia, France and New Zealand, which shared similar concepts.

The chair of the Armed Service Committee Adam Smith, a Democrat, and other legislators and US defence officials spoke of the importance of the growing ties between the two biggest democracies.

Smith noted that the Pacific command had been renamed Indo-Pacific with India in mind. "The improvement of our relationship with the nation of India is one of the most positive developments in foreign relations in last several years", he said. "I hope we can build and improve upon that".

Concurring with him, Schriver said it was "a great example of a partnership that we're investing a lot in". He said the first 2+2 high-level meeting of the defence and foreign affairs heads of the two countries in September made "great strides in the defense relationship".

Davidson, called the signing of the Communications Compatibility and Security Agreement (COMCASA) a "breakthrough down at the operational level".

India's Defence Minister Nirmala Sitharaman and External Affairs Minister Sushma Swaraj and Secretary of State Mike Pompeo and then-Defence Secretary James Mattis of the US met in New Delhi for the first 2+2 meeting to enhance strategic cooperation between their countries. COMCASA was signed at the meeting.

Representative Mike Waltz, a Republican, asked, "Moving forward. what more can we do in our engagement with India and what more should we be doing and what more would you like to do and how can this body help"?

"We're working to operationalise the COMCASA", Davidson said. "It's an IT (Information Technology) Agreement (Through) which we can do sharing and other things".

"There's an opportunity for us to share tactical fly away kits in an operational planning system that I think will advance our relationship on military to military relationship very, very well" he said.

He said that India switching to US defence equipment would enhance interoperability and "allows us to get to training doctrine, tactical level coordination that's really powerful".

"While they very much want to protect their nonaligned policy, the tactical and technical capability we get out of like systems will really advance that relationship down in the military space", he added.

In a written statement to the committee, Schriver said earlier, "Within South Asia, we are pursuing emerging partnerships with Sri Lanka, Nepal, Bangladesh, and the Maldives".

"With India and Japan, the Malabar exercise affords an opportunity to increase our ability to operate trilaterally, including through real-time information sharing", he said.