US-China trade war: How India can be in win-win situation - Explained in charts by HDFC Bank

As per HDFC Bank not all will suffer from US-China trade war. In fact, certain countries can actually benefit in one way or another. 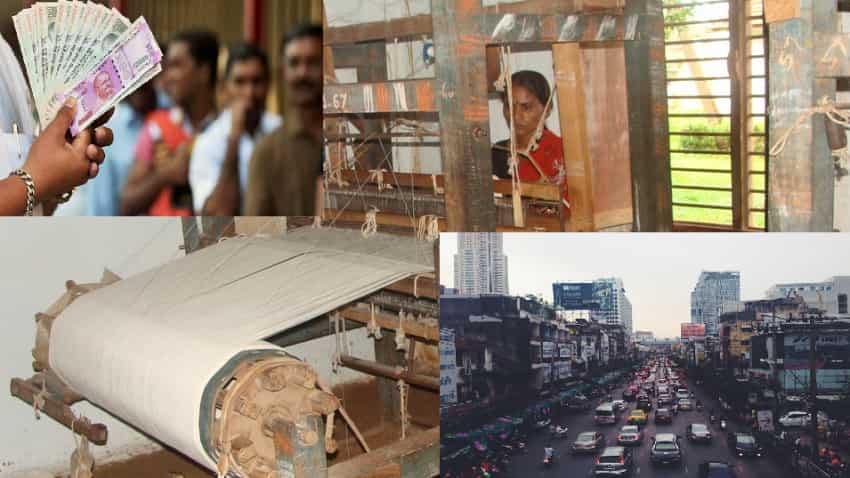 Some major countries including India will actually benefit. Photo: Pixabay/PTI

While US and China continue their trade deal negotiations, there have already emerged a number of negatives and many wealth-making opportunities for many countries, including these two, have been destroyed already. However, as per HDFC Bank, not all will suffer due to US hiking tariffs on Chinese goods. In fact, some major countries including India will actually benefit at a certain level especially in exports from the trade war between these two countries. A background check: US President Donald Trump increased tariffs to 25% from previous 10% on Chinese items worth $200 billion. Later, Trump also indicated his intention to further hike tariffs to 25% on other Chinese goods which are approximately $300 billion worth. US and Asian stocks since then have been volatile. Even US dollar index has been weakening against major other currencies.

According to HDFC Bank, negotiations are likely to continue while tariffs remain in place with a hope that the two sides are able to reach an agreement before June 1st - the effective date of Chinese tariffs. Trump will also likely meet Chinese President Xi Jinping at the G20 summit in Japan in late June.

How India will benefit? Find out as per HDFC Bank!

India could capture as much as $10 billion (3.5% of total exports) – especially in sectors such as readymade garments and tech. If exports witness boost, one can expect slight improvement in India’s current account and fiscal deficits. 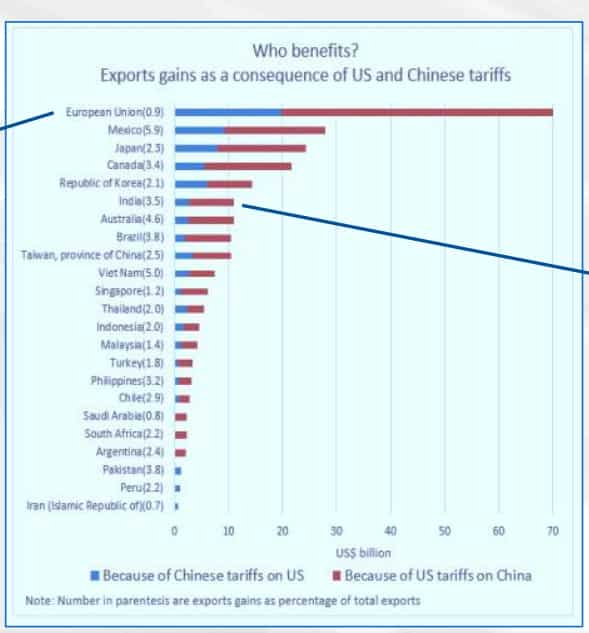 Gains are seen in sectors like IT, Auto, Readymade garments as investment move to India. The private lender said, “Some moderation in overall  exports due to global slowdown in short run.” However, the bank reiterates that in the longer term, the country will benefit.

With Chinese goods witnessing hefty tariff, HDFC Bank believes in Asia, global growth slowdown and trade compression could lead to a slowdown. Also,  slow Chinese growth could hurt economies like Singapore that have greater trade linkages with China. But some countries like Vietnam and  India could gain due to a shift in supply chains from China to these countries.

Due to tariff pressure, Chinese companies lead the pack in diversifying their supply chains away from China – India could benefit from this shift.

With higher tariffs on China, US companies could buy semiconductor parts from Malaysia, data storage units from Thailand, or ready made garments from India. 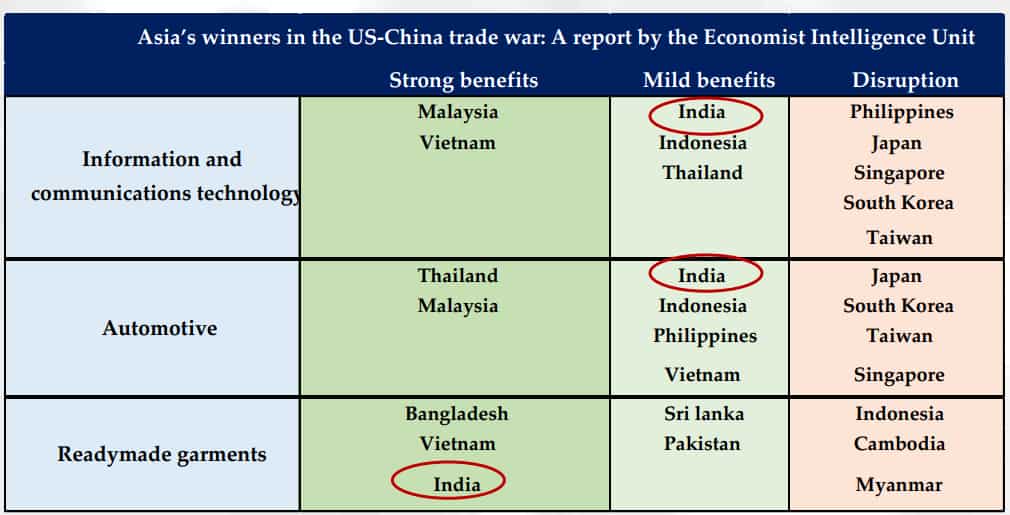 According to HDFC Bank, OECD research highlights that relatively closed economies like Brazil and India are somewhat insulated than other economies in the event of a more global trade war.

For India specifically, HDFC Bank says, “a clear-cut mandate in elections (stable government) could lead to more FII inflows. On a relative basis, the rupee could outperform within the EM world in case of escalation of trade war risks.”

Interestingly, if the impact of freshly imposed tariffs is more in terms of global trade slowdown and less in terms of market sentiment (no substantial depreciation of EM FX), HDFC Bank believes the likelihood of a rate cut in June could go up.

“We expect the RBI to remain on hold in the June MPC meeting. We believe that the MPC members would like to gain clarity on the fiscal math of the new government, progress of the monsoon, the extent of slowdown in the economy (if it’s a pre-election phenomenon or something longlasting), and the trajectory of food prices during the summer months. The rate cut is more likely in the August MPC meet,” said HDFC Bank.

Exports of agri, processed food products up 14.7% to USD 11.65 billion in April-October