Accusing the Congress of giving wrong statistics, he said its leaders had put the stressed assets identified as NPAs in 2014 at 36 per cent, but these had turned out to be 82 per cent. 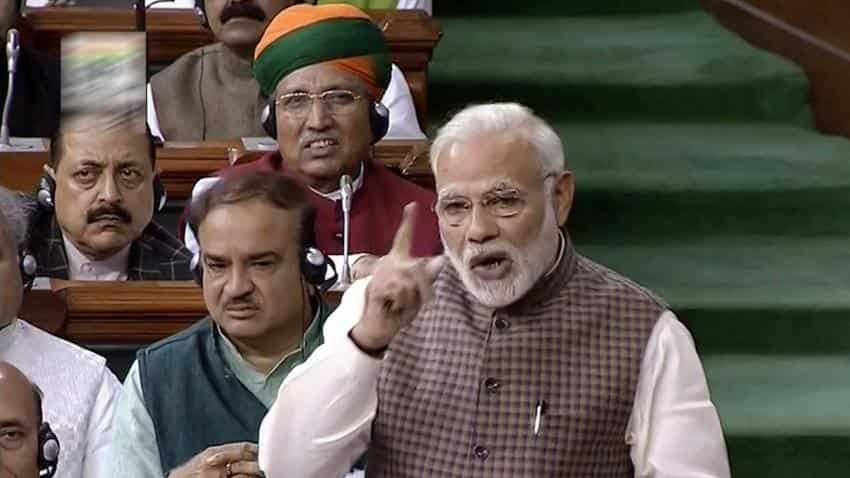 Prime Minister Narendra Modi today said the Congress-led UPA was fully responsible for the NPAs of banks and that the country would never forgive the party for its "sin".

Modi said the total lending of banks was Rs 18 lakh crore in 2008 and it grew to Rs 52 lakh crore in 2014 due to indiscriminate lending during the Congress-led United Progressive Alliance (UPA) regime.

"Today the rise in NPAs (non-performing assets) is due to the interest on Rs 52,000 crore. The country will never forgive you," the Prime Minister said, while replying to the debate on the Motion of Thanks to the President`s address in the Lok Sabha.

He further said, "The country should know that deeds of the previous government were behind NPAs. The previous government is fully responsible. They made such banking policies in which pressure was exerted on the banks, telephone calls were made and the favourites would get loans. The government, bank and middlemen would jointly restructure the loans on paper and lakhs of crores were given."

The Prime Minister said the entire issue came to attention of Bharatiya Janata Party (BJP)-led government after it came to office in 2014.

"This NPA is your sin. I am telling this in the temple of democracy. After our government came to power, we have not given a single loan which turned into a NPA."

Accusing the Congress of giving wrong statistics, he said its leaders had put the stressed assets identified as NPAs in 2014 at 36 per cent, but these had turned out to be 82 per cent.

Modi also accused the Congress of "hit-and-run politics" and said "the more you throw mud, the more lotus (BJP`s election symbol) will bloom".

The Prime Minister asked opposition leaders to come up with suggestions on the Ayushman Bharat scheme.

He said: "I heard MPs speak about Ayushman Bharat and some of them began to compare it with the schemes in the US and Britain. I think every nation has its own context, challenges and nature of working."

"What I am sure we agree on is that there is a lot of work to be done in our health sector," the Prime Minister said, adding "We brought up the Aayushman Bharat Scheme, and I agree that there can be some shortcomings in it. So I invite the opposition leaders to come up with suggestions for (improving) the scheme."

He further said, "I also request the opposition parties to form a task force within their parties to give suggestions," adding "After all, we are working for the nation and the poor."

Congress president Rahul Gandhi said Prime Minister Narendra Modi needs to answer the country on questions posed to him on the Rafale deal, farmers and jobs instead of making allegations in Parliament.

He seems to have forgotten that he is the prime minister not an opposition leader, Gandhi told reporters after Modi's reply in the Lok Sabha to the motion of thanks on the president's address.

"Questions are being asked by the country from the prime minister, but he is not answering... Here (in Parliament) you have to give answers and not ask questions to the country instead," he said.

Meanwhile, Congress Parliamentary Party leader Sonia Gandhi too asserted that the Prime Minister has said nothing new and he was repeating old things.

Opposition members, including those from the Congress, Trinamool Congress and the Left, staged a walk out of the Lok Sabha saying none of their questions ranging from Rafale deal to the Andhra Pradesh Reorganisation Act, have been answered by the Prime Minister.

The members walked out soon after Modi completed his 90- minute speech replying to the debate on the motion of thanks for the President's address in the House.

New airbase coming up in Gujarat near Indo-Pak border to emerge as effective centre for country's security: PM Modi at DefExpo 2022