Uttar Pradesh and Bihar are lagging behind in construction of toilets in rural areas under the Swachh Bharat Mission (SBM), the Centre's think-tank Niti Aayog. 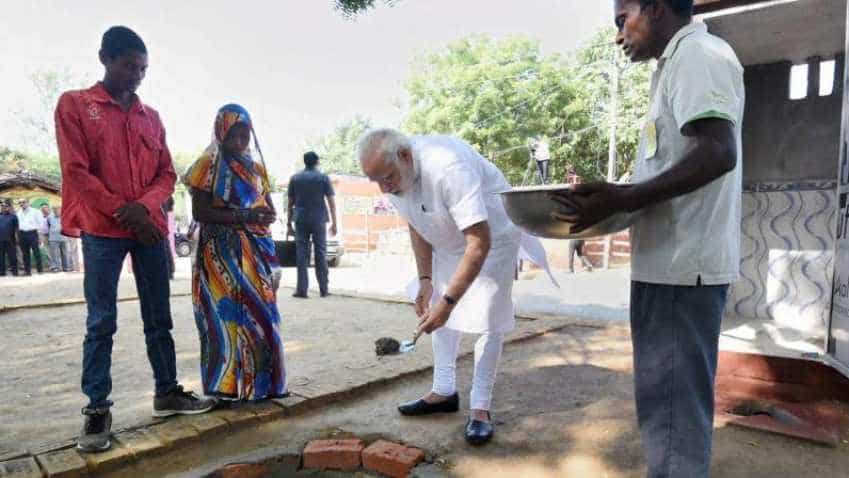 Uttar Pradesh and Bihar are lagging behind in construction of toilets in rural areas under the Swachh Bharat Mission (SBM), the Centre's think-tank Niti Aayog. Source: PTI
Written By: PTI
RELATED NEWS

Uttar Pradesh and Bihar are lagging behind in construction of toilets in rural areas under the Swachh Bharat Mission (SBM), the Centre's think-tank Niti Aayog stated in its vision document unveiled on Wednesday.
The much awaited document titled 'Strategy for New India @ 75' aimed to accelerate growth to 9-10 per cent and make the country a USD 4-trillion economy by 2022-23.

The Niti Aayog said the constraints faced by the clean India mission are largely related to implementation challenges, including lack of availability of space for construction of household toilets. "Tackling the problem of lagging states of the 1.56 crore household toilets yet to be constructed in rural areas, 0.90 crore are to be constructed in two states, namely Uttar Pradesh and Bihar," the vision document stated.

It also suggested that the expenditure on bio-toilets/bio-digesters may be considered for concession from the Goods and Services Tax (GST) to encourage large-scale adoption. It also recommends "the higher monetary compensation and social security to rag pickers and small sanitation workers for segregating waste.

This will help waste-to-energy plants as well as projects related to dry waste management and help reduce the burden on landfills". Solid and liquid waste management projects should be covered under priority sector lending, the document said, adding that to maintain the open defecation free (ODF) status of villages and cities, the government should continue to monitor and undertake corrective measures for areas that might be slipping back from ODF status.

The Ministry of Drinking Water and Sanitation is the nodal ministry for SBM with several other ministries, including Housing and Urban Affairs, being actively involved in achieving its goals.