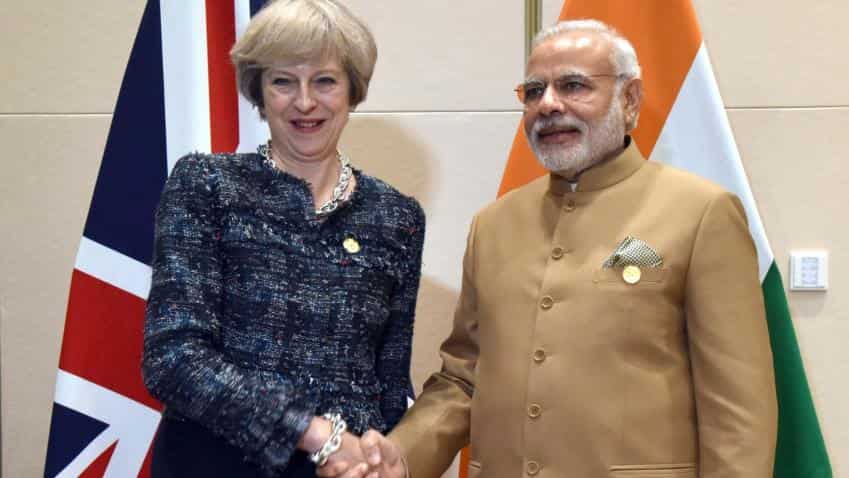 May is visiting India from November 6-8. Photo: IANS

With British Prime Minister Theresa May beginning her India visit, industry wants the two sides to address concerns such as impact of Brexit and visa fee hike to enhance bilateral cooperation and improve workers' mobility.

India should seek an assurance from the top UK leadership that Britain's exit from the European Union, dubbed Brexit, will not adversely impact India's trade and industry in the future, industry said.

May is visiting India from November 6-8.

Industry body CII in a statement said that there is need for greater clarity and mutual agreement on various issues to leverage the potential of the bilateral relationship.

Indian companies which have their European headquarters in the UK are concerned about procedural considerations after the Brexit vote, including access to EU markets, passporting rights for financial services companies, etc, it said.

Moreover, it said, there is a need to distinguish "short term labour mobility" issues from "long term net migration" issues.

Assocham said that India should seek an assurance from the top UK leadership that Britain's exit from the European Union, dubbed Brexit, will not adversely impact India's trade and industry in the future.

"Even as the global industry and trade stay somewhat anxious about the Brexit fallout, we get an opportunity to hear first hand from the British Prime Minister herself what the roadmap is for India and the UK in terms of re-designing and re-aligning our trade and investment relationship post the exit of Britain from the European Union," Assocham President Sunil Kanoria said.

Even as the process of Brexit in terms of legislative issues and negotiations with the EU gets underway, both India and the UK, with a bilateral trade of goods and services of over 18 billion pound sterling, should begin working on the new paradigm, the chamber said.

On top of the agenda should be negotiating and signing a Free Trade Agreement (FTA) which should be a win-win for both the countries and can be used as a very important trade tool to deal with the economic downturn, it said.

"With over 800 Indian companies having operations or trade with the UK, India has a large stake in the smooth transition of the British economy from a part of the European bloc entity to a standalone economy," Kanoria said.

CII highlighted that temporary Indian workers in the UK are not exempt from paying social security taxes, even though they are unable to avail any benefits from the UK social security system.

Withdrawals are usually permitted after 10 years and most temporary workers have a much shorter duration of stay in the UK. In the past, the UK has cited fiscal pressures and expressed the inability to enter into a totalization agreement with India, CII noted.

Besides, it said, there is a need to accord mutual recognition of qualifications gained through institutions in both countries.

According to the Ministry of Commerce, Indian exports to the UK were USD 9.2 billion and imports from the country were $5 billion in 2015-16. The UK ranks fifth as an export destination for India and 12th in terms of aggregate trade.

"Prospective bilateral agreement and growth avenues would push trade between India and UK to $20 billion by 2020 from the current level of at around $14.3 billion in 2015-16," PHD Chamber of Commerce President Mahesh Gupta said.

In investments, the UK is the third largest cumulative investor in India and the largest FDI source amongst the G20 nations with $23 billion of FDI as of March 2016.

What will British PM Theresa May's successor do about Brexit?

No 'May' in June! UK Prime Minister Theresa to quit after three years of failure to deliver Brexit

Brexit extension: Theresa May to meet Angela Merkel and Emmanuel Macron ahead of European summit